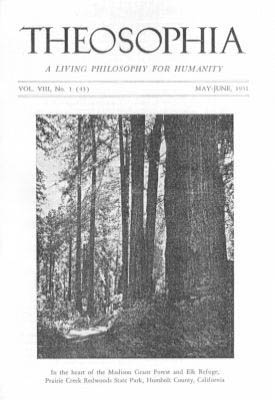 The challenge of the present day is one of emotions against reason, of uncontrolled feelings against cool judgment, of blind fanaticism against deep-seated conviction. The world of tomorrow depends upon which of the two states of consciousness will win in the world of today.

This is an age-old conflict in which nothing is new but the stage setting. It has been fought under other climes and under even more sinister skies.

Stripped of its outward trappings, it is the same old conflict between the animal consciousness in man, and the awakening consciousness of true manhood; between the man of flesh and the man of spirit; between the beast in him, and the god in his heart. And whoever attempts to parade this conflict in the peacock feathers of some attractive “ism”, is either a selfish demagogue or an ignorant fool.

It is easy to befuddle the mentality of people with high-sounding platitudes, and when its elemental urges and selfish propensities are somewhat understood and played upon, to stir the mob to emotional frenzy. It is equally easy to blind people’s vision with skillful word-weaving and promises of the good life, of peace and wealth. It is far more difficult, however, to make people think for themselves, to arouse in them the slumbering desire to know, and to teach them to help themselves and to become inwardly strong. The demagogue, whether of the political or the psychic kind, is unable to do this, and his alluring promises of knowledge and power, of prosperity and contentment, are of no avail in that field.

From East to West, and all over the world, the disparity which exists between our pretensions and our practices, both as individuals and as a collective whole, is accentuated today and emphasized in bold relief.

While vociferous orators and editors of yellow journalism are warning the people of impending catastrophes, and are pointing to the terrible dangers from outward enemies, corruption of public morals, and the steady degeneration of ethical integrity go on unabated, from one end of the earth to the other, undermining the very foundations of society and bringing the badly moth-eaten fabric of the State to the very brink of total ruin.

The survival of what we have come to call “civilization” is at stake; but not from the presence in our midst of atomic bombs or nuclear fission in general; rather on account of the sad fact that the ethical fabric of human relations has been allowed to deteriorate beyond the point of safety.

The era of divided nationalities, tribes, or ethnic groups is over. History, with its unchallenged logic, has brought an end to that. The world is moving with the rapidity of a cataclysm towards a unification and a wholeness which recorded history (an insignificant section of total history) has never witnessed before. Life on separate continents, or in segregated nations and groups, has become an utter impossibility in an age when peoples’ thoughts, ideas, actions, and hopes, are sent with the velocity of light to all parts of this ever-shrinking world.

To think in terms of a nation, even to cogitate in terms of one continent, is today old-fashioned and puerile. It discloses a limited vision which has not become attuned to the meaning of the moment we live in, and has refused to broaden to the requirement of a karmic necessity that is imperative and beyond human control. It depicts a man who is afraid of the future, and is hiding himself in the old, comfortable mental rut, which, if deepened enough, will assuredly become his final grave.

To become a Citizen of the World - and no national citizenship will suffice today - it is necessary to integrate love for one’s own country in the pattern of a greater love - the love of the world as a whole.

To become an intelligent denizen of the World of Tomorrow - for which the chaotic World of Today is but an entrance hall - it is imperative to broaden and expand one’s sympathies, until they include the whole of mankind, and to loosen one’s mental shackles until they allow the mind to escape into realms of speculation and hope, of vision and aspiration, where no narrow nationalism, or constricting sectarianism, can affect it any longer.

We are in urgent need of men and women who can picture to themselves the whole world as their home, and the entire globe as their field of action. We require individuals whose sense of the fitness of things, and whose intense moral values, make them think, feel and act as integrated humans, whose range of vision and sphere of consciousness includes all men.

That such men and women are with us - and in ever-increasing number - there can be no doubt whatsoever. It is only a question as to how much weight their ideas may have at the present moment to counter-balance, and in due time to silence, the mad-house of chaotic thinking which has temporarily eclipsed the sane judgment of so many people the world over.

While it is foolish to imagine that mass psychology can ever accept in our age and time the more technical teachings of the Ancient Wisdom, it is conceivable that the twin doctrines of reincarnation and karman may well become vastly more popular and better understood than they have been to date. There are indications of this all over the Occidental world.

Needless to say that if these teachings, in their most rudimentary form, could once become rooted in the minds of progressive thinkers who have the eye and ear of the populace, and are called upon to rule and guide various segments of mankind, a totally different order of society would be the outcome; and such a change of structure, far from being a dream for a distant golden age, could be accomplished within a relatively short time. This for two main reasons: one is that modern science gives us the opportunity and the know-how to reach the masses overnight, and the other, that all human beings have within themselves spiritual potentialities, which, when presented to their thinking by means which appeal to their imagination and stir their higher emotions into action, they often recognize.

From the depths beneath the confused thinking of the race, and from the distant and remote background of human mentality, there arises today a new Continent of Thought, whose dim outlines can even now be discerned on the horizon of the collective mentality of the people. Upon that Continent there will be reared a new type of mankind, whose minds will think in terms of an integrated Humanity, and whose hearts, dedicated to peace and knowledge, will wipe the poisonous weeds of war and strife from the face of the Earth.

Each one of us can be a Builder of that new Temple. Its deep foundations are being laid today. And a call has gone out for masons and carpenters and toolmakers, to speed the global task. Are you among the Builders?

“The heretic has always been the glowing point in society. When he is repressed by force, society stagnates. A virile society follows its true prophets and has better ways of dealing with error than the club, the noose or the stake ... The capacity of just plain folks for dissent is important. It is today an expression of the kind of courage upon which the very life of democracy depends ... Our danger is not from the honest dissenter but from the passions of the mob and those who manipulate it in the struggle for profit and power ... Our democracy is in desperate need of intelligent and constructive dissenters.” – Norman Thomas. (November 20, 1884 – December 19, 1968) was an American Presbyterian minister who achieved fame as a socialist, pacifist, and six-time presidential candidate for the Socialist Party of America.

We have 49 guests and no members online