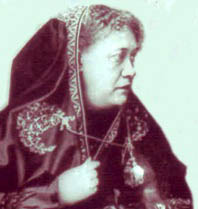 To close this first Instruction let me say that those who have honored me with their confidence by taking the pledge must in all necessity be separated into two broad divisions; those who have not quite rid themselves of the usual sceptical doubts, but who long to ascertain how much truth there may be in the claims of the Occultist; and those others who, having freed themselves from the trammels of materialism and relativity, feel that true and real bliss must be sought only in the knowledge and personal experience of that which the Hindu philosopher calls the Brahma-Vidyā , and the Buddhist Arhat the realization of Ā di-budha, the primeval Wisdom.

Let the former pick out and study from the Instructions only those explanations of the phenomena of life which profane science is unable to give them. Even with such limitations, they will find by the end of a year or two that they will have learned more than all their universities and colleges can teach them. As to the sincere believers, they will be rewarded by seeing their faith transformed into knowledge. True knowledge is of Spirit and in Spirit alone, and cannot be acquired in any other way except through the reign of the higher mind, the only plane from which we can penetrate the depths of the all-pervading Absoluteness. He who carries out only those laws established by human minds, who lives that life which is prescribed by the code of mortals and their fallible legislation, chooses as his guiding star a beacon which shines on the ocean of Mā yā , or temporary delusions, and lasts for but one incarnation. These laws are necessary for the life and welfare of physical man alone. He has chosen a pilot who directs him through the shoals of one existence, a master who parts with him, however, on the threshold of death. How much happier that man who, while strictly performing on the temporary objective plane the duties of daily life, carrying out each and every law of his country, and rendering, in short, to Caesar what is Caesar’s, leads in reality a spiritual and permanent existence, a life with no breaks of continuity, no gaps, no interludes, not even those periods which are the halting places of the long pilgrimage of purely spiritual life. All the phenomena of the lower human mind disappear like the curtain of a proscenium, allowing him to live in the region beyond it, the plane of the noumenal, the one reality. If man by suppressing, if not destroying, his selfishness and personality, only succeeds in knowing himself as he is behind the veil of physical Mā yā , he will soon stand beyond all pain, all misery, and beyond all the wear and tear of change, which is the chief originator of pain. Such a man will be physically of matter, he will move surrounded by matter, and yet he will live beyond and outside it. His body will be subject to change, but he himself will be entirely without it, and will experience everlasting life even while in temporary bodies of short duration. All this may be achieved by the development of unselfish universal love of Humanity, and the suppression of personality, or selfishness, which is the cause of all sin, and consequently of all human sorrow.