The Rising Tide Of Change 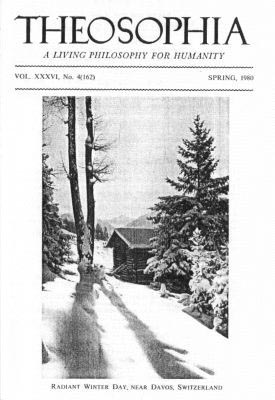 In the midst of the mighty struggle that is taking place in the outer world between right and wrong, between the call of a noble duty to mankind and the lure of selfishness and greed, perennial ideals of the spiritual life stand out in ever greater glory when projected against the somber clouds of hatred, callous cruelty and violence.

Let us not mistake the symptoms so abundantly seen on all sides. The tremendous inrush of dynamic spiritual and intellectual forces from their ever-living source is lashing the opposing powers of materialism into a desperate last-ditch stand, all along the line of human thought and endeavor. The rising tide of spiritual thought uproots human superstitions, stirs the stagnant pools of indifference, and brings to light the hidden things of darkness.

We face today, not a world of confusion and chaos, in which everything is falling apart, as some believe, but a world in reconstruction, in which a global adjustment is taking place, as the human framework, social and individual, is attempting to broaden its structure so as to become a fit vehicle for a greater consciousness, a deeper insight, a more encompassing vision.

As students of the ageless Esoteric Philosophy, Guardians on the battlements of the Spirit, it is our bounden duty to strengthen every effort directed towards the liberation of human thought the world over from slavery to the lower senses; to think and feel and act constructively and from the deepest depths of ourselves, at a time when the future of the human race is in the balance, and millions of men and women are longing for precisely that spiritual solution to their problems which is offered by Theosophy.

Evil is but the absence of good, and its presence stands out in contrast to whatever is good on the stage setting of the world. It is the darkness made manifest whenever light is thrown to illumine the scene. Evil must be fought with courage and daring, but the best way to fight it is by exemplifying the good, and by throwing light unto the things of darkness. Then we have the powers of light to back our efforts, and the solar forces as our allies.

In the compassionate spirit of the Great Ones who are born at the Winter Solstice from the ever-immaculate depths of their own Inner Selfhood, let us rededicate our lives to the noble service of all that lives, to the supreme Cause of Light and Truth, and the reverence for things felt but unseen!

The stark realities of a world in turmoil cannot affect our noblest dream. It is a living thing, pulsating, beating with its own heart-beat, brooding over the imperfections of men and their present confusion. Out of that dream were born all the noble reforms of centuries gone by; all the selfless deeds of valor; all the visions of the future and the solace of the current day. Out of that ageless dream of human perfectibility came the mighty thoughts which have shaped new civilizations and raised men and women to new heights of achievements. It is more vivid today than ever before - for that dream, though intangible and seemingly distant, endures from age to age and can never die!