[The magazine Vidya (http://www.theosophysb.org/site/publications.html , edited by associates of the United Lodge of Theosophists in Santa Barbara, USA, published the following article in its winter 2013 issue; here slightly revised.] 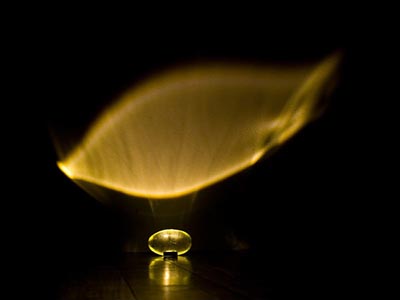 An effort to understand buddhias a reflection of atmanrequires us to consider the second principle of human nature in Theosophical teaching. In the sevenfold scheme of human evolution and the human principles, the first principle, atman, is the universal Self, the true undifferentiated Self of everyone. The light of that Self is reflected in the second principle, buddhi, the first of the principles in the plane of what we might call some form of primordial matter. If we look at the field of material existence and the knower of the field, as they are called in the Bhagavad Gita, all of the principles below atman are part of the field. Asbuddhi is the first principle below atman, we could consider it as being closest to the central Reality and best able to reflect what is true about the universal spirit. Buddhiis called the spiritual soul, the highest intellection. It is considered to be the principle that ideally, in the course of human evolution, will be the guiding principle for all our decisions when we eventually become highly evolved enough. As manas, the third principle, becomes wedded to buddhi, in a mystic marriage, we understand that the intellectual capacities of the mind to discriminate and to use reason, to understand the field, would be illuminated by a sense of wisdom and guidance from above. Spiritual intuition is that buddhic principle.

Of course, we may wonder how we could become more buddhic. It sounds like something wonderful. It sounds like something we need! It is really not a case of needing to develop more light. The analogy given by William Q. Judge is that of a seeker who wants to give more light to the world, which is covered by clouds. He points out that there is plenty of light above the clouds. What is needed is a vortex of mental energy and a focused and concentrated effort on the plane of the clouds to dissipate the clouds and allow the sunlight to shine down to the earth where there is the darkness of ignorance. We can see this similarly with the principle of buddhi. There is plenty of light from the atman. There is no need to feel as if we need to generate light. Instead, greater porosity is needed, more permeability. In The Secret Doctrine, H. P. Blavatsky mentions that it is part of the evolutionary plan that matter is even now becoming more porous.

What does that mean for us as individuals, to have our principles below the level of buddhi, namely manasand then the lower quaternary, become more porous? It would allow in life that peace which passeth all understanding to be incarnated in all instances. Porosity involves an opening up, a lightening, being less materialistic, to having less deadweight, less concentration on oneself, a letting-go. Psychologically, if one were thinking, feeling, meditating on the idea of porosity to the higher light, one’s mind would become less wrapped up around the personal self. One’s mind would allow a sense of not being completely married to one’s own opinions. One might be more open to listening to great teachers. One might also be open to listening to the deeper heart. It is the inner light of buddhi, which is the talisman for attaining any kind of truth. We cannot recognise the truth outside ourselves if we do not have within ourselves some criterion, some touchstone with which to recognise that truth. Buddhiis that light of truth within us.

We can become more aware of that light of wisdom in the quiet moments of the day, in the morning, in the evening, in the twilight, if we meditate in a way such that we allow ourselves to open up and free that personal sense of false egoity and re-identify ourselves with what is greater. Using the time cycles of the day can be useful to allow a greater awareness of the spiritual intuition. Also, we can use the symbols that have been given to us throughout history through various religious traditions and also myths, symbols of the infinite. For example, we can contemplate the ocean, meditating upon it, just thinking about, existing on the shoreline and realising that across that infinite expanse there a depth that is unfathomable. Yet we can approach the ocean with a relative feeling of safety. We can get our feet wet in that ocean of wisdom and know that there is much deeper wisdom beyond. We can feel a sense of identity to that which is greater and more fundamentally real than anything we have, in our personal lives, been able to understand. If we look at the idea of reflection itself, that too is an image of spiritual intuition. The sun reflecting off the water is also an image of the wisdom of buddhi. We could think about what causes the reflection. On the material plane, that would be an alignment of atoms such that, when electromagnetic radiation shines on the atom, the electrons can be spurred to higher energy levels and then be released back down to lower energy levels, thus emitting corresponding photons of light. This reflection and mirroring on the physical plane is an analogy to spiritual intuition because it only works when light couples with matter. If electromagnetic radiation of light does not interact with the reflective surface, there will be no reflection. Similarly buddhimust interact with atman. There must be something about it that recognises the atmanand is able to transmit the light down to lower planes. It is an interesting analogy. Scientists understand that not everything interacts with electromagnetism. What does that mean in the material world and the cosmic world? What does it mean “not to interact?” They call it “dark matter” or “dark energy.” If we look at the image of the sun reflecting off the ocean, we realise that this is deep interaction. The light is completely reflecting off the ocean surface, especially when the ocean is calm.

We could calm ourselves. We could allow that serene and placid surface of the unruffled mind to reflect the visions of the infinite. Buddhiis something we can use in our lives in terms of using that wisdom in our daily interaction with others. If we feel deep within us, deep within our hearts, that we might have inside us an understanding of what is going on within another person, what is going on within ourselves and feel as if we know to act about it, we may have a touchstone to test whether such feel is from a deeper source, or perhaps just a passing phase, and we may be able to universalize intuition. We could say: “If this attitude is coming from a place of truth, then if it were applied universally, it would still be true.” This feeling toward others is not based in the personality, but is based in the sense of an abstract principle of human beings existing as incarnated monads on earth, not “me” as a person and “that” as another person. Being able to abstract, seeing our intuitions as being able to benefit all, is to see principles, not personalities. There is a good test that Gandhi gave. He said to recall the face of the poorest man we have ever known and ask if the action we are contemplating would be of any use to him. Compassion is a talisman of buddhic intuition. If there a deep compassion for others that is truly selfless, that reflects buddhi.

There is a suggestion in the Bhagavad Gita(chapter 2) which is the idea of mental devotion. This is a very powerful way of developing a useful life where one’s highest principles are evolving in a greater understanding of themselves through material nature. Mental devotion towards that which is highest within us is a very powerful mode of spiritual practice. That mental devotion can only come through dedicating oneself to one’s highest principle. As H. P. Blavatsky says of mystical Christianity, it teaches self-redemption through one’s highest principle, the liberated paratman. Redemption, or saving ourselves, paying our debts to the Self that we have forgotten, and to redeem the self that is lost and to bring it back in alignment with that which is highest, can happen through a deep sense of humility, letting go of all intention of personal progress, letting go of any concern with selfhood, considering only what is of benefit for all and using the benefit of all as one’s motive.