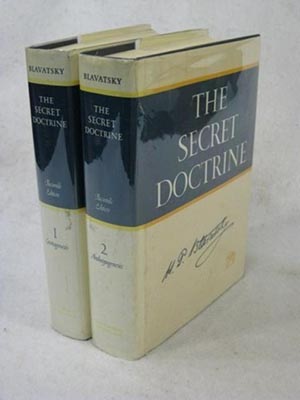 The Secret Doctrine, H. P. Blavatsky’s master work, is a remarkable and marvelous book. Like all works that come to us through human hands, it is not free from error. It is not a sacred text nor infallible, but it is certainly a book worth reading “wholly, and with diligence and attention” because it is the foundation of modern Theosophy. In this book (2:443), H.P.B. quotes Francis Bacon as saying, “In contemplation, … if a man begin with certainties, he shall end in doubts; but if he will be content to begin with doubts, he shall end in certainties.” That observation echoes the motto of the Theosophical Society, “There is no religion higher than truth.” Religious faith begins with certainties; the search for truth must begin with doubts.

Many readers, even devoted Theosophists, have found the book to be difficult of access. Blavatsky responded to such complaints by replying that “a work which compares several dozens of philosophies and over half-a-dozen of world-religions, a work which has to unveil the roots with the greatest precautions, as it can only hint at the secret blossoms here and there — cannot be comprehended at a first reading, nor even after several, unless the reader elaborates for himself a system for it (“Mistaken Notions on the ‘Secret Doctrine’,” Lucifer 6 [June 1890]: 334).

That is a profound observation, applicable not to The Secret Doctrine alone, but to all reading material. Every text actually has two types of authors: the writer, of course, but also the reader. Readers bring to a text their own background, knowledge, and expectations. So no two readers read exactly the same text. Reading is a process of interpretation, and interpretation determines the meaning of the text. Thus, although The Secret Doctrine is one book in a physical sense, in meaning it is as many books as it has readers. So you and I, in reading that book are really co-authoring it for ourselves.

Readers must not look for a ready-made system in The Secret Doctrine, but instead each of us must elaborate for ourselves a system out of it. The process of jñāna yoga is to try to understand the workings of the cosmos and one’s own place in it. To do this, we construct theories or “mental pictures.” The word theory comes from a Greek root meaning “to look or view,” and so a theory is a way of viewing things — a mental picture. The danger is always that we will mistake the picture for the reality, that we will become so enthralled by the elegance and consistency and accuracy of the picture that we no longer notice the reality but gaze at the picture of it instead. But fortunately we are saved from losing ourselves in our theories by the fact that theories are always flawed. As we contemplate our mental pictures, we discover inaccuracies and errors in them. That discovery can evoke either of two responses.

True Believers say the inaccuracies do not exist, or are not important, and continue to contemplate their mental pictures long after the flaws are obvious. But genuine students will tolerate a certain number of flaws, at least for a while. However, as flaws accumulate, genuine students will decide that the mental picture they have constructed is inadequate. Then they construct a new, larger, and better picture that corrects the flaws of the old one. In time, of course, flaws in the new picture require that it be modified. So mental picture succeeds mental picture, each correcting the flaws of its predecessor, but introducing new ones. That, as Thomas Kuhn has shown in The Structure of Scientific Revolutions, is also the way science evolves. And that is the way the esoteric student, following the path of jñāna yoga progresses as well.

If jnana yogis are successfully following that path, however, they do not just go on substituting one flawed picture for another indefinitely. Instead, eventually they come to the realization that “no picture will ever represent the Truth.” The process of substituting one picture, one theory, for another goes on “until at last the mind and its pictures are transcended and the learner enters and dwells in the World of no form, but of which all forms are narrowed reflections.” The purpose of the picture of the cosmos and of humanity that we find in The Secret Doctrine is to lead us to realize that no such picture can ever be adequate to the Truth that it represents. The purpose of The Secret Doctrine is to help us to realize that The Secret Doctrine is inadequate — indeed, that all theories, all mental pictures are inadequate. Jñāna yoga uses the mind to lead us beyond the mind. We study The Secret Doctrine in order to go beyond The Secret Doctrine. Truth is not in charts and tables and lists, not in chains and rounds and races. Truth is in the recognition that no book, formulation, or statement can ever adequately represent the way reality is. Truth is in the recognition that there is no higher doctrine than Truth. That is Theosophy. That is the Secret Doctrine.

Although The Secret Doctrine is the basic source book of modern Theosophy and deserves respect for its great learning and deep insights, we should never treat it as a “sacred book” — an infallible or final authority on Theosophy. The very composition of the book — including the process of its writing, the organization of its contents, and even the substance of its thought — is such as to make its treatment as an authoritative text inappropriate.

Despite any reservation about its authority, The Secret Doctrine is not a work that is to be merely tasted or sampled. Nor is it a work to be swallowed whole and indiscriminately. It is rather a work to be chewed upon — that is, to be read and reread in order to arrive at the sustaining essence of its message. It is a work to be digested: that is, to be incorporated, not just into our minds but also into our sensibilities and spirits. It is one of those very rare books that are not to be read only in parts, nor out of idle curiosity. It is rather a book to be read with diligence and attention — to be read wholly.

As an approach to reading The Secret Doctrine wholly, one might start with selected passages that collectively encapsulate the essence of the book. Here are some of those passages, beginning with the Bowen notes:

The Secret Doctrine and Its Study, notes by P. G. B. Bowen

No matter what one may study in the S.D. let the mind hold fast, as the basis of its ideation to the following ideas:

(a) The Fundamental Unity of All Existence. This unity is a thing altogether different from the common notion of unity — as when we say that a nation or an army is united; or that this planet is united to that by lines of magnetic force or the like. The teaching is not that. It is that existence is One Thing, not any collection of things linked together. Fundamentally there is One Being. This Being has two aspects, positive and negative. The positive is Spirit, or Consciousness. The negative is Substance, the subject of consciousness. This Being is the Absolute in its primary manifestation. Being absolute there is nothing outside it. It is All-Being. It is indivisible, else it would not be absolute. If a portion could be separated, that remaining could not be absolute, because there would at once arise the question of comparison between it and the separated part. Comparison is incompatible with any idea of absoluteness. Therefore it is clear that this fundamental One Existence, or Absolute Being must be the Reality in every form there is.

I said that though this was clear to me I did not think that many in the Lodges would grasp it. “Theosophy,” she said, “is for those who can think, or for those who can drive themselves to think, not mental sluggards.” H.P.B. has grown very mild of late. “Dumskulls!” used to be her name for the average student.

The Atom, the Man, the God (she says) are each separately, as well as all collectively, Absolute Being in their last analysis, that is their Real Individuality. It is this idea which must be held always in the background of the mind to form the basis for every conception that arises from study of the S.D. The moment one lets it go (and it is most easy to do so when engaged in any of the many intricate aspects of the Esoteric Philosophy) the idea of Separation supervenes, and the study loses its value.

(b) The second idea to hold fast to is that There is no Dead Matter. Every last atom is alive. It cannot be otherwise since every atom is itself fundamentally Absolute Being. Therefore there is no such thing as “spaces” of Ether, or Akasha, or call it what you like, in which angels and elementals disport themselves like trout in water. That’s the common idea. The true idea shows every atom of substance no matter of what plane to be in itself a Life.

(c) The third basic idea to be held is that Man is the Microcosm. As he is so, then all the Hierarchies of the Heavens exist within him. But in truth there is neither Macrocosm nor Microcosm but One Existence. Great and small are such only as viewed by a limited consciousness.

(d) Fourth and last basic idea to be held is that expressed in the Great Hermetic Axiom. It really sums up and synthesises all the others: “As is the Inner, so is the Outer; as is the Great so is the Small; as it is above, so it is below; there is but One Life and Law; and he that worketh it is One. Nothing is Inner, nothing is Outer; nothing is Great, nothing is Small; nothing is High, nothing is Low, in the Divine Economy.”

No matter what one takes as study in the S.D. one must correlate it with those basic ideas.

In addition to the Bowen notes, other passages are useful entrees to the study of H.P.B.’s major work. They are identified here by title or first and last words, by volume and page numbers in the standard edition (Collected Writings Edition. 3 vols. Adyar, Madras: Theosophical Publishing House, 1978-1979), and by the number of lines in the passage in parentheses when the passage is short:

“Preliminary Notes on the Archaic Stanzas and the Four Prehistoric Continents.” 2:1-12.

We have 515 guests and no members online