To understand Baum’s connection with Theosophy, in addition to being aware of the Theosophical Society and its founders, one must obviously also be cognizant of what the Society stands for, that is, of what Theosophy is. 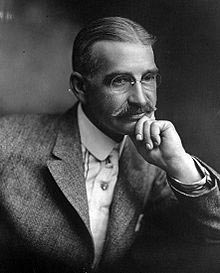 The Theosophical Society has no requirement of belief other than sympathy with its three objects: (1) to form a nucleus of the universal brotherhood of humanity, without distinction of race, creed, sex, caste, or color; (2) to encourage the study of comparative religion, philosophy, and science; and (3) to investigate unexplained laws of nature and the powers latent in man. Those objects rest on certain assumptions, namely that (1) a single ultimate reality underlies all existence, including all of us; (2) we attempt to understand that reality by our various modes of knowing, namely religion, philosophy, and science; and (3) the aim of human life is to form an understanding of the world around us and of ourselves and our place in the world. The last rests on the assumption that we have greater potential abilities and powers than we are normally aware of.

Concerning Theosophy itself, some “big” questions of life are these: Who am I really? Why is the world the way it is? Where did I come from? What am I doing here? What comes next? When will I find out all these things? If you have ever wondered about these or other such apparently unanswerable questions, your ability to wonder in that way proves you are human. We human beings are curious about ourselves and the world around us. That curiosity appears especially in little children, who are continually asking “what?” and “why?” As we grow older, we may learn to live with our unknowing and stop asking such questions — at least overtly. But, being human, we have a passion for knowing the meaning of things, and that passion cannot be wholly suppressed.

The human passion for understanding ourselves and the world around us puts us on a quest for self-discovery. The human species has various names to identify itself. We are, in the technical language of biologists, Homo sapiens “the intelligent human.” We might most appropriately be called Homo quaeritans “the questing human” or “the human who is on a search.”

Over the ages, humans have developed several approaches to answering their own questions — for pursuing their search. Three of the most important of such approaches are science, philosophy, and religion, each of which starts from its own assumptions and forms its answers in its own way. Because of those differences, however, science, philosophy, and religion may occasionally seem to contradict one another. But because they are all trying to answer the “big” questions, the right answers to those questions cannot really be contradictory. Instead, it behooves us to understand what causes the differences and how we can find the truth in common to the various approaches. [Much of the foregoing is paraphrased from the book Theosophy: An Introductory Study Course by John Algeo, 4th ed. (Wheaton, IL: Theosophical Publishing House , 1968).]

A basic teaching of Theosophy is that the universe is sevenfold in nature. The lists of the seven universal and human principles vary somewhat, so their specification is less certain than their number, but typical listings are the following:

In the Esoteric Instructions, which state that “the Human principles have No numbers per se” but are, with their corresponding colors and planets: (7) auric envelope, blue, Jupiter; (6) buddhi, “Spiritual soul, or Atmic Ray: vehicle of Atman,” yellow, Mercury; (5) manas, “the Higher Mind, or Human Soul,” indigo, Venus; (4) prana or jiva “Life,” orange, Sun; (3) kama manas, “the Lower Mind, or Animal Soul,” green, Saturn; (2) kama rupa, “the vehicle or seat of the Animal Instincts and Passions,” red, Mars; and (1) linga sharira, “the Astral Double of Man, the Parent of the Physical Man,” violet, Moon.

Consciousness + Energy produces Will (Buddhi = intellect, discrimination, reason, will; Intuition), the vehicle or expression of Self (Atma) + Kundalini. 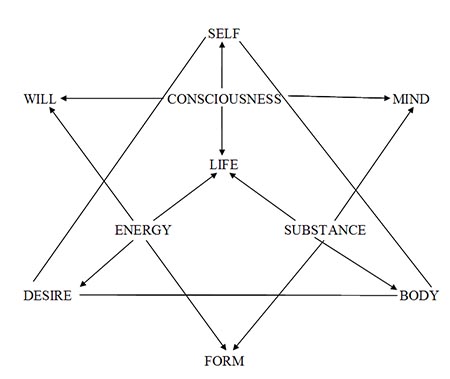