Some Words on Daily Life, by an unnamed Master of the Wisdom 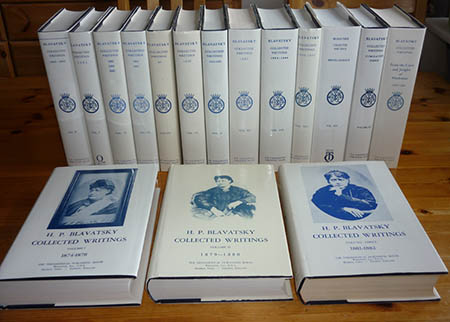 It is divine philosophy alone, the spiritual and psychic blending of man with nature, which, by revealing the fundamental truths that lie hidden under the objects of sense and perception, can promote a spirit of unity and harmony in spite of the great diversities of conflicting creeds. Theosophy, therefore, expects and demands from the Fellows of the Society a great mutual toleration and charity for each other’s shortcomings, ungrudging mutual help in the search for truths in every department of nature — moral and physical. And this ethical standard must be unflinchingly applied to daily life.

Theosophy should not represent merely a collection of moral verities, a bundle of metaphysical ethics, epitomized in theoretical dissertations. Theosophy must be made practical; and it has, therefore, to be disencumbered of useless digressions, in the sense of desultory orations and fine talk. Let every Theosophist only do his duty, that which he can and ought to do, and very soon the sum of human misery, within and around the areas of every Branch of your Society, will be found visibly diminished. Forget SELF in working for others — and the task will become an easy and a light one for you . . . . .

Do not set your pride in the appreciation and acknowledgment of that work by others. Why should any member of the Theosophical Society, striving to become a Theosophist, put any value upon his neighbours’ good or bad opinion of himself and his work, so long as he himself knows it to be useful and beneficent to other people? Human praise and enthusiasm are short-lived at best; the laugh of the scoffer and the condemnation of the indifferent looker-on are sure to follow, and generally to out-weigh the admiring praise of the friendly. Do not despise the opinion of the world, nor provoke it uselessly to unjust criticism. Remain rather as indifferent to the abuse as to the praise of those who can never know you as you really are, and who ought, therefore, to find you unmoved by either, and ever placing the approval or condemnation of your own InnerSelf higher than that of the multitudes.

Those of you who would know yourselves in the spirit of truth, learn to live alone even amidst the great crowds which may sometimes surround you. Seek communion and intercourse only with the God within your own soul; heed only the praise or blame of that deity which can never be separated from your true self, as it is verily that God itself: called the HIGHER CONSCIOUSNESS. Put without delay your good intentions into practice, never leaving a single one to remain only an intention — expecting, meanwhile, neither reward nor even acknowledgment for the good you may have done. Reward and acknowledgment are in yourself and inseparable from you, as it is your Inner Self alone which can appreciate them at their true degree and value. For each one of you contains within the precincts of his inner tabernacle the Supreme Court — prosecutor, defence, jury and judge — whose sentence is the only one without appeal; since none can know you better than you do yourself, when once you have learned to judge that Self by the never wavering light of the inner divinity — your higher Consciousness. Let, therefore, the masses, which can never know your true selves, condemn your outer selves according to their own false lights . . . .

The majority of the public Areopagus is generally composed of self-appointed judges, who have never made a permanent deity of any idol save their own personalities — their lower selves; for those who try in their walk in life, to follow their inner light will never be found judging, far less condemning, those weaker than themselves. What does it matter then, whether the former condemn or praise, whether they humble you or exalt you on a pinnacle? They will never comprehend you one way or the other. They may make an idol of you, so long as they imagine you a faithful mirror of themselves on the pedestal or altar which they have reared for you, and while you amuse or benefit them. You cannot expect to be anything for them but a temporary fetish, succeeding another fetish just overthrown, and followed in your turn by another idol. Let, therefore, those who have created that idol destroy it whenever they like, casting it down with as little cause as they had for setting it up. Your Western Society can no more live without its Khalif of an hour than it can worship one for any longer period; and whenever it breaks an idol and then besmears it with mud, it is not the model, but the disfigured image created by its own foul fancy and which it has endowed with its own vices, that Society dethrones and breaks.

Theosophy can only find objective expression in an all-embracing code of life, thoroughly impregnated with the spirit of mutual tolerance, charity, and brotherly love. Its Society, as a body, has a task before it which, unless performed with the utmost discretion, will cause the world of the indifferent and the selfish to rise up in arms against it. Theosophy has to fight intolerance, prejudice, ignorance and selfishness, hidden under the mantle of hypocrisy. It has to throw all the light it can from the torch of Truth, with which its servants are entrusted. It must do this without fear or hesitation, dreading neither reproof nor condemnation. Theosophy, through its mouthpiece, the Society, has to tell the TRUTH to the very face of LIE; to beard the tiger in its den, without thought or fear of evil consequences, and to set at defiance calumny and threats. As an Association, it has not only the right, but the duty to uncloak vice and do its best to redress wrongs, whether through the voice of its chosen lecturers or the printed word of its journals and publications — making its accusations, however, as impersonal as possible. But its Fellows, or Members, have individually no such right. Its followers have, first of all, to set the example of a firmly outlined and as firmly applied morality, before they obtain the right to point out, even in a spirit of kindness, the absence of a like ethic unity and singleness of purpose in other associations or individuals. No Theosophist should blame a brother, whether within or outside of the association; neither may he throw a slur upon another’s actions or denounce him, lest he himself lose the right to be considered as a Theosophist. For, as such, he has to turn away his gaze from the imperfections of his neighbour, and centre rather his attention upon his own shortcomings, in order to correct them and become wiser. Let him not show the disparity between claim and action in another, but, whether in the case of a brother, a neighbour, or simply a fellow man, let him rather ever help one weaker than himself on the arduous walk of life.

The problem of true Theosophy and its great mission are, first, the working out of clear unequivocal conceptions of ethic ideas and duties, such as shall best and most fully satisfy the right and altruistic feelings in men; and second, the modelling of these conceptions for their adaptation into such forms of daily life, as shall offer a field where they may be applied with most equitableness.

Such is the common work placed before all who are willing to act on these principles. It is a laborious task, and will require strenuous and persevering exertion; but it must lead you insensibly to progress, and leave you no room for any selfish aspirations outside the limits traced . . . . Do not indulge personally in unbrotherly comparison between the task accomplished by yourself and the work left undone by your neighbours or brothers. In the fields of Theosophy none is held to weed out a larger plot of ground than his strength and capacity will permit him. Do not be too severe on the merits or demerits of one who seeks admission among your ranks, as the truth about the actual state of the inner man can only be known to Karma, and can be dealt with justly by that all-seeing LAW alone. Even the simple presence amidst you of a well-intentioned and sympathising individual may help you magnetically. . . . . You are the free volunteer workers on the fields of Truth, and as such must leave no obstruction on the paths leading to that field.

The degree of success or failure are the landmarks the masters have to follow, as they will constitute the barriers placed with your own hands between yourselves and those whom you have asked to be your teachers. The nearer your approach to the goal contemplated — the shorter the distance between the student and the Master.

We have 536 guests and no members online