[Originally printed in Vidya, a magazine edited by associates of the United Lodge of Theosophists in Santa Barbara, CA, in its autumn 2013 issue, and posted on the Website www.theosophysb.org/site/publications.html ] 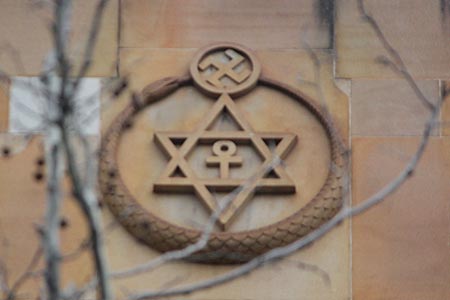 “There is no Religion higher than Truth” (Motto of the Maharajah of Benares).

According to H. P. Blavatsky and her teachers, one of the greatest sources of human divisiveness and one of the fundamental factors working against the purely natural feelings of brotherhood and solidarity between peoples, nations, and races is what is commonly called religion. We see examples throughout history of how institutionalised religions can misinterpret, mistranslate, and even invert the original teachings of their founders, while at the same time demanding rigid and unthinking adherence. For those who dogmatically cling to religious doctrine with fanatical, blind belief, even minor religious differences can provoke intolerance and condemnation. To this day, we find distorted creeds actively feeding distrust, oppression, and hatred towards others of differing views, even leading to terrorism and war. In addition, religious doctrines that perpetuate a belief in the separation between humanity and nature help to justify the rampant destruction and abuse of the natural environment that has reached a critical stage. Therefore, if we wish to affirm, as H. P. Blavatsky taught, that Theosophy is not a religion, but is religion itself, we must be extremely careful to understand and examine what her statement means.

We can begin with definitions. The word religion is derived from Latin re+legere,“to gather, to be united,” or relegare,“to be bound fast together.” It is the opposite of divisiveness and separateness. In an article entitled “Theosophy as Religion” H. P. Blavatsky defined the essence of religion as “that which binds not only all MEN, but also all BEINGS and all things in the entire Universe into one grand whole.” If we accept that definition as our starting point, it would seem that to whatever extent a doctrine encourages a sense of disunity, even at the level of thought, that doctrine is violating the fundamental meaning and purpose of religion.

In the same article, H.P.B. refers to Thomas Carlyle, the 18th-century Scottish writer who described the Protestant religion of his day as a kind of “working for divine wages.” That comment aptly characterises a dominant theme of much contemporary religiosity. He called Protestantism “a prudential feeling, grounded on mere calculation, a matter of expediency and utility . . . whereby some smaller quantum of earthly enjoyment may be exchanged for a far larger quantum of celestial enjoyment.” The widely held dogma that a new soul is created with each human birth and that the eternal destiny of that soul is determined by the actions of a single life may help to foster religious self-interest. According to H. P. Blavatsky, such dubious metaphysical assumptions undermine a sense of responsibility for our circumstances and pervert our ideas of right and wrong while justifying selfishness instead of encouraging true morality. She quotes James Miller, the 18th-century English playwright’s description of religion: “true Religion is always mild, propitious and humble; Plays not the tyrant, plants no faith in blood, Nor bears destruction on her chariot wheels; But stoops to polish, succour and redress,

And builds her grandeur on the public good.”

This, said H. P. Blavatsky, is what true Theosophy is or ought to be: “the service of humanity” and “the alleviation of human suffering in all its forms, but especially the mental and spiritual.” It is a search for the universally true and good, not so that we may advance, but so that we may properly accompany and guide others — not just our friends and those who are kind to us, but also our so-called enemies, those who hate and revile us, and especially the outcast and the forgotten. Theosophical teaching unconditionally affirms our responsibility for all humanity and all of nature. It offers sublime morality articulated in the Sermon on the Mount, which is not merely the truly Christian way, but a universal code of ethics preached also by Buddha, Confucius, Krishna, and a long line of great Sages reaching back thousands of years before the time of Christ, as well as by true teachers of humanity ever since.

Theosophy offers no new dogma or creed and purports to bring no new revelations. Rather, it attempts to uncover the timeless truths underlying and uniting all the great religious traditions of humankind affirming that “Truth is one, its expressions are many.” The aim to give at least partial expression to inexpressible spiritual realities, appropriate to the language, time and race of those to whom truth is being delivered is the aim of all great teachers and enlightened exemplars. In time, the overgrowth of interpretation, tradition, ritual, and misuse obscures the intended original meaning. The chief aim of H. P. Blavatsky’s Secret Doctrine was to show that, “however divergent the respective doctrines and systems of old may seem on their external or objective side, the agreement between all becomes perfect, so soon as the esoteric or inner side of these beliefs and their symbology is carefully compared and examined.” This hidden root teaching is called the Wisdom-Religion, at one time a universally accepted doctrine common to the entire human race, binding all into one family.

The first principle of the Wisdom Religion and the center around which all else revolves, is absolute unity. All of manifestation, seen and unseen, spiritual and material, is the periodical emanation by a single causeless cause — a boundless, immutable, and eternal essence. Given many names in many different traditions, this ever-present, unconditioned spiritual Reality is not different from our true Self, the Self of all. Each human soul is a ray of this spiritual sun, a constituent drop in the boundless ocean of eternal light and life, and in every aspect is inseparably bound to all other beings and to the whole. It is the working of the law of karma that maintains this unity in balance and harmony over vast cycles of time in a complex universe of seeming multiplicity and diversity. Every selfish thought or self-seeking act transgresses the divine reality of our radical interdependence, which is complete at every level. Selfishness goes against the ways of nature and will produce its corresponding reaction. Each thought — like a pebble thrown into the pond of life — will, sooner or later, set in motion every single drop of water therein. While the entire human race and all the kingdoms of nature are collectively involved in a vast, interdependent cycle of involution and evolution, each of us is also directly and ultimately responsible for our own actions. Under karma, we each have our own unique path to forge. Soul evolution requires that we learn to listen and respond to the dictates of our conscience, the god within.

The journey homeward is a steep path that leads back to self-conscious re-union with the One. According to Theosophy, the course of many lives will lead each of us to a “direct beholding” of all the eternal verities as witnessed and confirmed by mystics and seers throughout the ages. To attain this experience will require the complete transmutation of the personal, self-centered tendencies of human nature, as well as the progressive awakening of the highest noetic faculties of perception, reason, and intuition. Each will thus learn to pierce the illusions of the senses, to see through and transcend the many veils of nature and “see into the heart of things.” Plato and Pythagoras depicted this seeing and knowing as the culmination of the philosophical quest. It is a quest for knowledge of the laws and principles governing every plane and form of existence and cannot be separated from true science as conceived by the ancients and, increasingly, by wise contemporary thinkers.

A scholar of Islamic teaching, Seyyed Hossein Nasr, in his Religion and the Order of Nature (pp. 6-7) wrote: “The environmental crisis requires not simply rhetoric or cosmetic solutions but a death and rebirth of modern man and his worldview . . . . There must be the rebirth of the religious knowledge of nature, the traditional cosmologies and sacred sciences still preserved in many of the non-Western areas of the world . . . . Without the rediscovery of this sacred science of the order of nature and the ethics of the environment, there is no doubt that what remains of order in the natural and human worlds will turn into further chaos . . . that can destroy all human life on Earth. To preserve the sanctity of life requires the re-sacralisation of nature, not in the sense of bestowing sacredness upon nature, which is beyond the power of man, but of lifting aside the veils of ignorance and pride that have hidden the sacredness of nature from the view of a whole segment of humanity.”

Not in a facile manner, but by a radical return to their original and ancient meanings religion, philosophy, and science can unite to give us the knowledge and wisdom designed to serve every human need, solve many human problems, and promote the highest progress and felicity of all beings. In order for such an awakening to be in accord with the greatest possible good, it must be achieved on behalf of all. Only then will it lead to complete gnosis, Brahma Vidya, “god-knowledge” otherwise known as Theosophia, the “wisdom of the Divine.” This is true religion, declared H. P. Blavatsky, “the Beacon Light of truth towards which in all ages the imprisoned human soul has struggled.” Thereby, H.P.B indicates: “He who gets there must have ceased to be a number, and have become all numbers. He must have forgotten the illusion of separation, and accept only the truth of collective individuality.”

The drop must re-become the ocean and live by it, in it, and for it.