[This article was first published in the Friend’s Review of March 1992.]

She was the woman with the magic eyes. Piercingly blue, those eyes looked, not just at, but completely through, anyone she fixed upon. She seemed to see through the surface persona right to the innermost secrets of heart and soul. 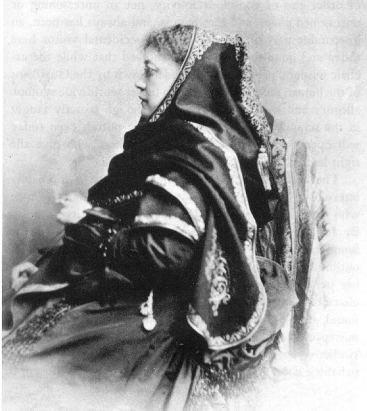 Those magic eyes were set in a puffy face crowned with frizzy hair, atop the corpulent body of Helena Petrovna Blavatsky, perhaps the most remarkable and influential woman of the last century. Descended on her maternal side from Russian nobility, she had a grandmother who was famous as a natural scientist and a novel-writing mother who was called the George Sand of Russia.

When she was a little girl, the family serfs believed she had power to command nature spirits and household hobgoblins. Throughout her life, she was surrounded by amazing phenomena: bell sounds from the empty air, materialized objects, the ability to read sealed messages, astral projections, and more. She impatiently dismissed the belief that spiritualistic communications came from the dead, and claimed that they were the result of natural forces that anyone could learn to control.

Imperiously self-willed, when she was eighteen on a dare she married a man of her father’s generation — but refused to consummate the wedding. Instead, she left home and homeland to wander over the world — Europe, the Near East, India, the Far East, North Africa, and America. In the course of those travels, she met remarkable teachers and learned the rationale behind the marvelous-seeming phenomena that followed her everywhere.

In 1873 she was sent to the United States to found an organization to carry on the mission of spreading the ideas she had learned. Two years later in New York city she started such a group in cooperation with several other persons, notably Henry Steel Olcott, a former Colonel in the Union Army who had spent the Civil War exposing government corruption and had been one of three investigators into the assassination of President Lincoln and William Quan Judge, a promising young, New York-based lawyer. They called their new organization the Theosophical Society.

After the publication of her two-volume book Isis Unveiled (an extended argument that the ancients knew more than the moderns do about the mysteries of life), Blavatsky and Olcott-­the Theosophical Twins — went to India, where they established the international headquarters of their Society at Adyar, Madras,(now Chennai) on the southeastern shore of the subcontinent. Ever the subject of controversy and the object of missionary churchmen’s enmity, Blavatsky left India in 1885, eventually to settle in London, where she completed her masterwork, The Secret Doctrine: The synthesis of Science, Religion, and Philosophy.

Blavatsky died in 1891, 123 years ago, but her influence lives on. Her voluminous writings — they fill more than twenty volumes, with several volumes of her letters still being edited — are the source of most modern esoteric ideas. She and her followers popularized in the Western world such Eastern ideas as karma, reincarnation, the subtle body, inner planes, spiritual evolution, evolved human mahatmas or masters, and initiation into a cosmic hierarchy of adepts. Long before Aldous Huxley, she taught the existence of a Perennial Philosophy, an Ancient Wisdom that has existed all over the world since the childhood of humanity, usually in secret form.

That Ancient Wisdom, as she interpreted it, emphasizes the unity of all human beings and indeed of all life on our planet and throughout the universe. It says that life and evolution have a goal, which is increasing awareness, fuller being, and productive joy. It proclaims the ability and responsibility of all persons to determine their own futures, to be their own saviors. At the same time, it stresses the interconnectedness of all people — we suffer one another’s pains and benefit from one another’s strengths. The ethical keynote of her teaching was altruism—the recognition that the best way to help ourselves is to forget ourselves in helping others.

Helena Blavatsky was no saint. Her emotional ups and downs, her expectation that others would work as tirelessly and unstintingly as she did, her sharp and plain tongue, her skill in managing others, and the demands she put on them — all of those characteristics must have made her a difficult woman to live with. But her esoteric knowledge, her inspiring vision, her great heart, and her startling blue eyes made her a woman that no one could ignore.

The artists and intelligentsia of her time flocked to her. The poet William Butler Yeats was a student of hers. The painters Kandinsky and Mondrian found inspiration in her teaching. Thomas Alva Edison was a member of her Society, as were the legendary founder of baseball, Abner Doubleday, and Frank Baum, the author of The Wonderful Wizard of Oz. All of them in their several ways — and many others too — reflected her influence.

Blavatsky’s work is still carried on by the organization she founded. For more information about her and Theosophy, write to:

The Theosophical Society in America:

We have 621 guests and no members online