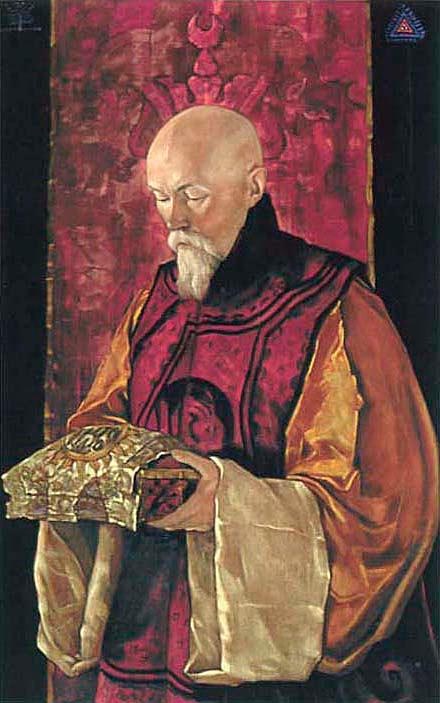 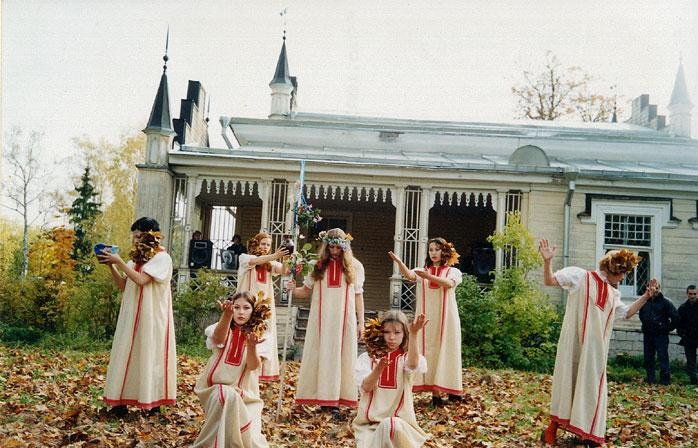 Nicholas Roerich had a happy and stimulating childhood in both the urban culture of St. Petersburg, as well as the natural beauty of the rural countryside. In 1872, Nicholas’s father purchased a 3000-acre estate, Isvara, outside of St. Petersburg.

Isvara was a magical place for Nicholas, who spent many happy summers exploring the vast wilderness around the estate and gaining a deep love and respect for nature. Nicholas loved to lie in the grassy fields at Isvara and look up at the clouds, seeing fantastic pictures appearing across the sky. He would also spend lovely hours in the evening, curled up in a chair reading books about faraway lands and imagining what those places were like. A family friend who was an archaeologist used to take Nicholas on digs near the estate and through these experiences, Nicholas developed a great love for archaeology and discovering hidden treasures of the world. It was also at Isvara that Nicholas became fascinated with a painting that hung in the living room of the estate. The painting was of a huge snow covered mountain illuminated with the setting sun. This mountain was the sacred Himalayan peak, Kanchenjunga, and was prophetic of what were to be great influences in Nicholas’s life: painting and eastern mysticism. 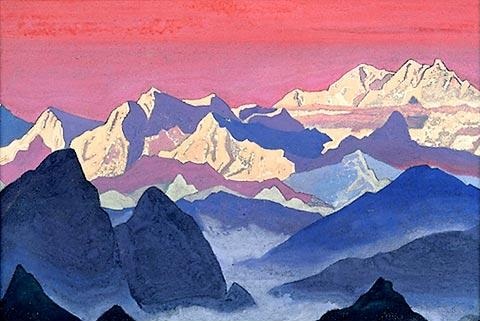 As a young man, Nicholas became increasingly interested in drawing and painting and decided that he wanted to pursue an education in art; however his father had his sights set on his son’s following in his footsteps and taking over the family law business. The conflict was solved when Nicholas made a commitment to pursue his education in both law and art. It was perhaps these years of intensive scholarly dedication that gave Nicholas Roerich his ceaseless work ethic and allowed him to accomplish vast achievements throughout his lifetime, which included the completion of more than 7000 paintings from The Messenger: Tribe Against Tribe (1897), his graduation painting, which first gained him notoriety as an artist, to his final work, Command of The Master (1947). 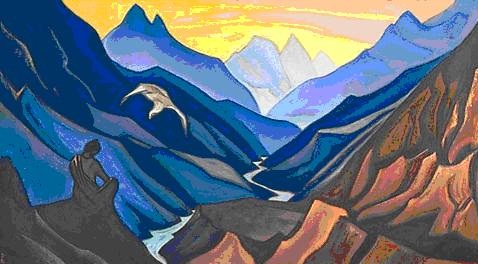 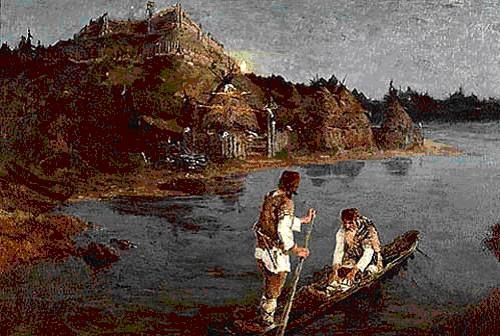 Roerich’s earlier works were influenced by Symbolism, perhaps suggesting his fascination and curiosity as a child with his grandfather’s collection of Masonic symbols. As Roerich’s life became increasingly immersed in the study of Eastern mysticism, Theosophy, and the search for spiritual truth throughout his many journeys, his paintings gave way to a more abstracted approach, much like the processes Kandinsky and other painters experienced as they delved deeper into spirituality. 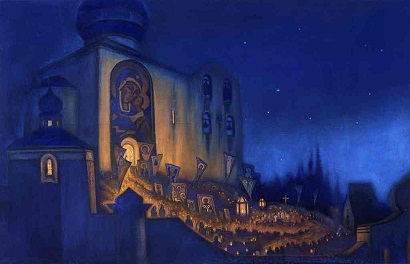 For Roerich, expressing spiritual concepts in his painting required an approach beyond realism, much like the Theosophical teachings of Blavatsky, who claimed that the words of our language are not fully capable of describing the enlightened realms beyond our knowing. For Roerich, like other spiritually inspired painters such as Wassily Kandinsky and Lawren Harris, the difficulty in expressing “otherworldly” concepts caused him to evolve toward a simplicity in his work that relied more on color, and less on the accurate portrayal of form, to express the imagery of the great spiritual realms that he explored. 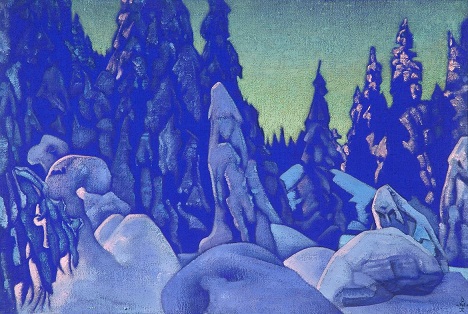 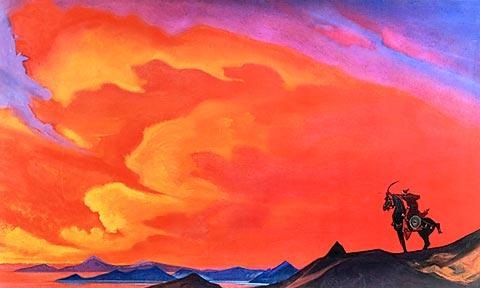 As Roerich’s interest in Eastern mysticism and Theosophy grew, it compelled him to embark on a five-year trek through northern India, central Asia, and the Altai Mountains. Accompanied by his wife, Helena, and his two sons, Roerich set out to “trace the origins of all Eurasian religious traditions and prove their common source (McCannon, 2000, p. 292)” which Roerich believed was Shambhala, the mystical land hidden in the Himalayas. Roerich documented his travels through the many paintings he completed along the way. These Asian landscapes provided “symbols for his inner visions and spiritual convictions” (McCannon, 2000, p. 271) and these landscapes were an “idealized geographical region [he used] as a prism through which to perceive the spiritual plane he sought in his art” (McCannon, 2000, p. 292). 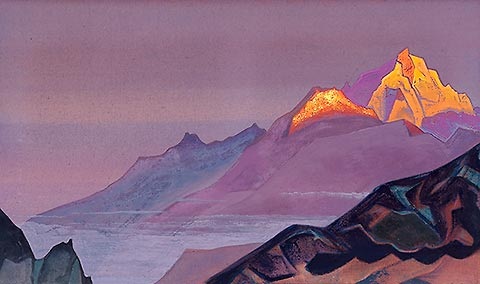 To interpret the works that map his spiritual journey, Roerich provided us with The Flowers of Morya, a collection of his poetic works that are rich in verbal imagery and provide keys to “…understanding the underlying significances of his paintings” (Decter, 1989, p. 108):

Divergent trails suggest disorientation. Mountains are symbolic of spiritual ascent. Gates or doors denote either spiritual progress, if the seeker has succeeded in crossing the threshold; or a spiritual barrier if the gate is closed. Messengers are transmitters of God’s wisdom. Water in general stands for purification and renewal, and rivers, which flow in a specific direction, suggest transition and movement toward a goal. (Decter, 1989, p. 108)

Roerich came to believe, “…that his works portrayed the heavens and earth as they were when human life first sprang into existence. He intended his landscapes to be windows that looked into a bygone realm that suspended between physical reality and an otherworldly anywhere, an arena for vast cosmic struggles, as well as a birthplace for humanity that, in its newness, was bursting with spiritual vitality, freshness and purity” (McCannon, 2000, p. 273).

Through his spiritual journeys into the Himalayas, Roerich also developed a deep sense of the role that the feminine principle had in the evolvement of humanity. Several of his paintings depict this importance, particularly, The Mother of the World. The Letters of Helena Roerich, written by his wife, explains the importance of this work: “The ‘Mother of the World’ is at the head of the Great Hierarchy of Light of our planet. Read in the Cryptograms of the East the narrative about the Mother of the World, and accept it as the highest reality” (1.)
Helena Roerich further explains the inspiration for the painting, “The star of the Mother of the World is the planet Venus. In 1924 this planet for a short time came unusually near to the Earth. Its rays were poured on Earth, and this created many new powerful and sacred combinations which will yield great results. Many feminine movements were kindled by these powerful rays” (2.) 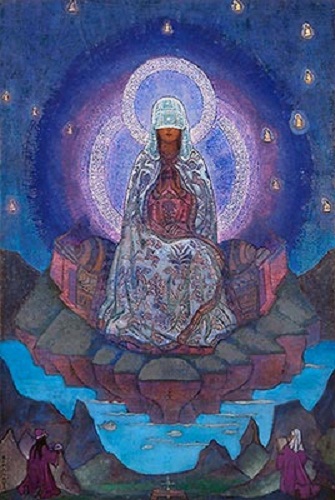 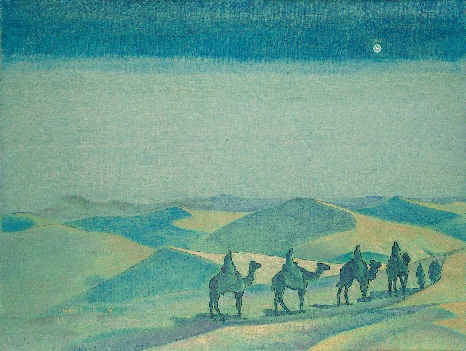 Another powerful result of the Roerich expedition throughout northern India and Tibet, was the discovery of the sacred fire, or Agni Yoga. One evening, while in her tent, Helena Roerich, witnessed a flame that erupted seemingly out of nowhere in front of her eyes. To her amazement, the flame was not hot, merely warm. It was a strange electrical force that occurred high up in the Himalayan Mountains and led the Roerichs to contemplate the great forces of the earth that lay dormant. Agni Yoga became a metaphor for this power, that the Roerichs believed is in us all, and can be developed. 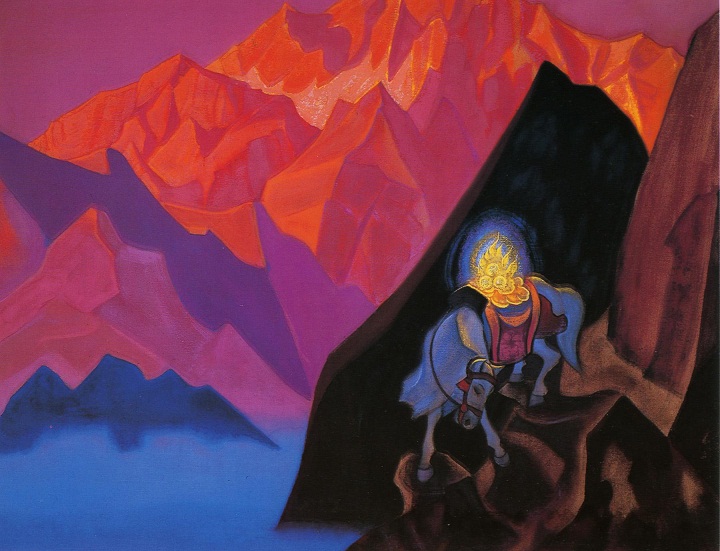 This great discovery led Nicholas and his wife Helen to establish the Agni Yoga society, a nonprofit educational society that is still active today:

Agni Yoga is a path not of physical disciplines, meditation, or asceticism—but of practice in daily life. It is the yoga of fiery energy, of consciousness, of responsible, directed thought. It teaches that the evolution of the planetary consciousness is a pressing necessity and that, through individual striving, it is an attainable aspiration for mankind. It affirms the existence of the Hierarchy of Light and the center of the Heart as the link with the Hierarchy and with the far-off worlds. Though not systematized in an ordinary sense, Agni Yoga is a Teaching that helps the discerning student to discover moral and spiritual guide-posts by which to learn to govern his or her life and thus contribute to the Common Good. For this reason Agni Yoga has been called a ‘living ethic’(3.)

Roerich’s travels also inspired him to establish the Roerich pact, a treaty on preserving and protecting the culture of the world, in both war and peace. His deep appreciation and study of religious and cultural symbols of the world that he infused within many of his paintings led him to believe that it was possible to create peace through art and beauty, and that these symbols, icons of spirituality, needed protecting. Roerich created the Banner of Peace to identify cultural landmarks and stated, “When the whole earth will be covered by the Banner of Peace, protecting cultural treasures, there will be no field for war.” The Roerich Pact was signed in the White House on April 15, 1935, with twenty-one nations of the Americas signing it and has become international law agreed upon by many nations. For his work on this treaty, Roerich was nominated for a Nobel Peace prize. 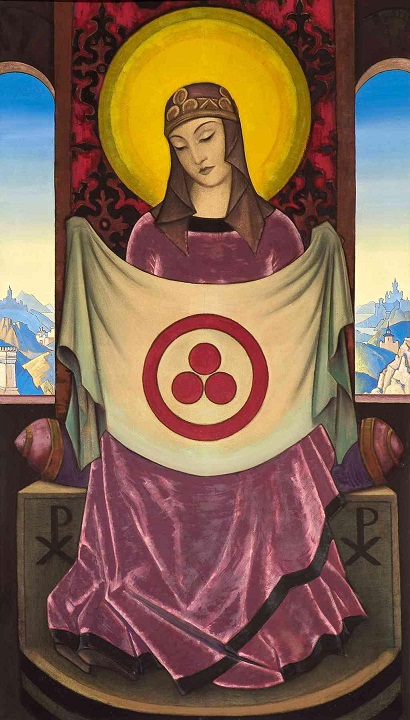 Nicholas Roerich spent much of his life seeking hidden treasures within the landscapes of the earth and within his own being. The paintings he left us are the maps to these sacred places and are there for us to use as we seek our own spiritual pathway. 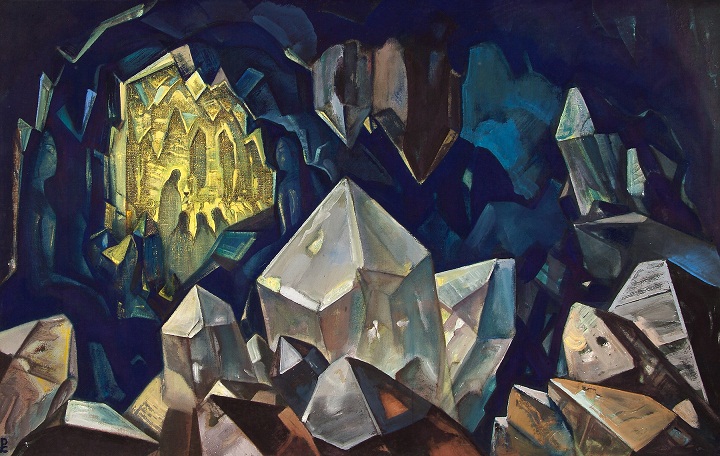 He also left us the teachings of Agni Yoga, a living ethic that is a practical guide to developing awareness of the fiery energy of our hearts and the heart of the universe, through consciously directed thought in our daily lives. Roerich believed that art and beauty provide a gateway for humanity to enter into higher spiritual realms, and should be created, preserved, and accessible so that all people of the earth can contemplate the higher truths by being given the opportunity to observe the signposts along the path of enlightenment.

In 1947, Nicolas Roerich ended his journey on earth and began another perhaps in a realm into which he provided us with insights through his many paintings. He was in a sense a messenger providing for us his works to explore and contemplate; paintings that are rich in color and symbolism, providing us with messages regarding the essence of what he knew and was compelled to share with humanity…the gift of art and beauty; the pathway to the divine. 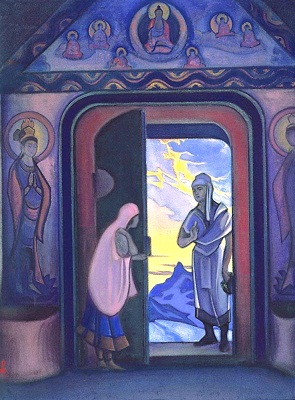 Jacqueline Decter, Nicholas Roerich, The Life and Art of a Russian Master
(London: Thames and Hudson, 1989).

Note from the editor: this article was proviously publsihed on Theosophy Forward in September 2011

We have 405 guests and no members online