[Based on the article in the Theosophical Encyclopedia, by Vic Hao Chin]

Systems of mystical initiation in the Graeco-Roman world flourished for about two thousand years up to the fourth century. Many great persons of antiquity were known to be initiates of such schools, such as Plato, Pythagoras, Plutarch, Cicero, Iamblichus, and Porphyry, as well as Christian Fathers such as Clement of Alexandria, Origen, and Ammonius Saccas. The Mysteries were sanctioned and publicly protected by the Greek states, and later by the Roman Empire, but declined and became prohibited when Christianity became the official religion of the Roman Empire in the fourth century CE under the Emperors Constantine and Theodosius. 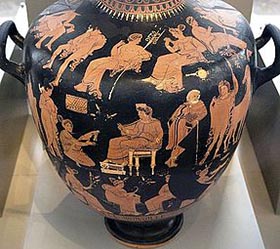 The name mystery originated from the Greek word myein, which means “to close.” It refers to the closing of the lips to maintain secrecy of the initiatory rites. Violation of the pledge of secrecy was punishable by death. This injunction not to divulge had been so effectively carried out that today there are no known writings left behind about the inner rites of the Mystery schools. However, some have writen of the fruits of such initiation. Plato, for example, quotes Socrates as saying that one who is initiated into the Mysteries becomes truly perfect (Phaedrus). Clement of Alexandria speaks thus of the Mysteries: “Here ends all teaching. One sees Nature and all things.”

Helena P. Blavatsky wrote that “the Mysteries were in every country a series of dramatic performances, in which the mysteries of cosmogony and nature, in general, were personified by the priests and neophytes, who enacted the part of various gods and goddesses, repeating supposed scenes (allegories) from their respective lives. These were explained in their hidden meaning, to the candidates for initiation, and incorporated into philosophical doctrines” (The Theosophical Glossary, “Mysteries”).

The initiates of the rites are called the mystēs. They should know how to speak Greek and had not shed any blood (or who had been subsequently purified). They are introduced by an official called the mystagōgos. The ceremony is presided by a hierophant, and the initiates undergo multiple stages of instruction.

The Mysteries were scattered in various places in the Mediterranean states. The earliest was that of Samothrace, but the most well-known was the one performed at Eleusis. Others were found in Thebes, Byblus, Cyprus, Crete, and Tyre. There were several kinds of schools: Eleusinian, Orphic, Bacchic, and Mithraic. The Egyptians also had Mysteries of Isis and Osiris. In the Middle East, the Jews had their Mystery schools, particularly among the Essenes and the Druzes.

Christianity was profoundly influenced by the Mysteries. Dean William Inge wrote that Catholicism owed to the Mysteries “the notions of secrecy, of symbolism, of mystical brotherhood, of sacramental grace, and, above all, of the three stages in the spiritual life: ascetic purification, illumination, and epopteia as the crown” (S. Angus, The Mystery-Religions). Several statements of St. Paul similarly suggest that he too was an initiate of the Mysteries. In his letter to the Corinthians, he wrote: “But we speak the wisdom of God in a mystery, even the hidden wisdom, which God ordained before the world unto our glory” (Corinthians 2:7). To the Ephesians, he also stated: “And to enlighten all as to what is the fellowship of the mystery, which has been hidden from the ages in God” (Ephesians 3:8-9).

Freemasonry is a descendant of the Mysteries, although its mystical content is often lost sight of in modern Masonic organizations. Its essential link with the Mysteries is repeatedly affirmed in Albert Pike’s magnum opus, Morals and Dogma, a primary source of Masonic tenets.

Origins. The origins of the Greek Mysteries are shrouded in myths and legends connected with Greek gods and goddesses such as Dionysius (god of fruitfulness), Demeter (god of grain), and Orpheus. Other writers suggest that the Mysteries came from Egypt and India.

The Eleusinian Mysteries were associated with the Homeric myth in which Hades, the god of the underworld, took the daughter of Demeter, Kore, into his world. Demeter was so distraught that she refused to make grains grow. Zeus then commanded Hades to return Kore to her mother. Kore, however, had eaten of the pomegranate seed, which bound her to the underworld. Thus, it was agreed that she would stay with Hades for one-third of every year. Demeter acquiesced and allowed the grains to grow again. She also taught the Mysteries to the people of Eleusis, which she visited during her search for Kore.

Herodotus states that the Mysteries came from Orpheus, the son of Apollo, whose seven-stringed lyre is said to represent the seven degrees of initiation. Mythology relates that when Zeus destroyed the Titans with lightning, the ashes of the latter rose up to become dual-natured humanity: having the divine qualities of Dionysius, and the evil qualities of the Titans. The Orphic Mysteries were instituted to help human beings rise from their baser nature to their divine qualities. The rites emphasize asceticism, vegetarianism, and a strict ethical life.

Degrees. The degrees of the Mysteries are variously reported as three or five. Proclus identified them as (1) telete, (2) muesis, and (3) epopteia. Telete, which means “to make perfect,” consists of dromena or “things acted,” the legomena or “things said,” and the deiknymena or “things shown.” The dromena may have been the drama about Demeter and Persephone. Muesis refers to the initiation itself, in which the initiate undergoes trials. Epopteia allows the initiate to “see the divine light” or visions of divinity.

In addition to the third epopteia stage, two more are added by other writers. Theon of Smyrna described these stages as follows:

“And the fourth, which is the end and design of the revelation, is [the investiture] the binding of the head and fixing of the crowns . . . whether, after this, he [the initiated person] becomes a torchbearer, or an hierophant of the Mysteries, or fills some other part of the sacerdotal office. But the fifth, which is produced from all these, is friendship and interior communion with God” (quoted in Collected Writings 14:275-276).

Eleusinian Mysteries. The most important Greek Mystery school was the one in Eleusis in Attica. It was celebrated every year in the month of Boedromion (September-October), or around the autumnal equinox. It was preceded by purificatory rites in Agrae called the Lesser Mysteries, which took place in the month of Anthesterion (February-March). The Eleusinian Mysteries were held for nine days and are considered the Greater Mysteries. After the opening, the initiates went to the sea carrying a piglet for purification and sacrifice. Then they entered the inner sanctum of the Temple, the Telesterion, inside of which was another sanctuary called the Anaktoron, into which only the Hierophant was allowed to enter. What transpired inside is not known except that the initiates received revelations. Plato and Proclus allude to theophany or the appearance of gods or immortal spirits during the revelatory parts of the rites. The last day closed with the rites called Plemochoai, the name of the two earthen dishes that the initiates used while they recited a mystical formula.

Other Mystery Traditions. From a Theosophical viewpoint, the initiations practiced in the Mystery schools are traditions that could be found in many other cultures such as India, Egypt, and other parts of the Middle East. Herodotus stated that the Mysteries came from India through Orpheus. They used to be open and unveiled when human selfishness was not yet so marked. H. P. Blavatsky wrote that the Mysteries originated in the fourth root race, and the hieroglyphics were developed out of the need to preserve their secrets. As human selfishness proliferated, religion became divided into the esoteric Mysteries and the exoteric religious traditions. In addition to the Mysteries found among Egyptians, Greeks, Romans, and Chaldeans, writers also consider that there were similar initiatory traditions among the Druids, the Druzes, the Essenes, and the Kabbalists. In essence, if not in methods, we may refer to the many mystical traditions of modern times, such as those of mystical Christianity and Tibetan Buddhism, as the continuation of the Mystery system of initiation.

We have 948 guests and no members online