[Based on the article in the Theosophical Encyclopedia, by Richard W. Brooks and Jay G. Williams]

Theravāda Buddhism is sometimes referred to as “Southern Buddhism” because it is the form of Buddhism found mainly in Sri Lanka, Burma, and Southeast Asia. Actually, the term theravada (Sankrit sthaviravada, literally “the doctrine of the elders”) was used by only one of the sects of early Buddhism, However, modern usage now lumps those different sects together and considers the others to be offshoots of Theravada. The Mahayana (“Greater Vehicle”) Buddhists, often referred to as “Northern Buddhists” because they are found mainly in Tibet, China, inner Asia, and Japan (as well as north Vietnam), considered the Theravadins to be an inferior form of Buddhism and referred to them as “Hinayana” (i.e., “the lesser vehicle”). Some Theravādins actually accepted that pejorative name, considering it an indication of humility, an important Buddhist virtue. 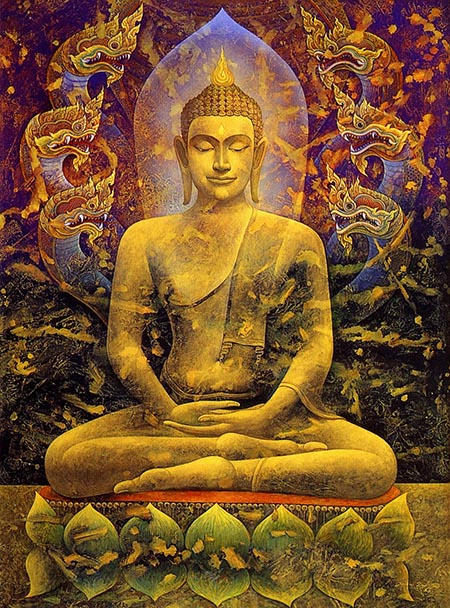 The Mauryan Emperor Asoka, who convened the third council of Buddhists in the mid-third century BCE after converting to that religion, promulgated Buddhism throughout his empire (which included all of north and central India as well as part of what is now Afghanistan and had suzerainty relations over south India as well) by setting up pillar and rock edicts throughout his empire proclaiming his policy and urging a Buddhist moral code, by sending his son Mahendra to Sri Lanka to convert that island nation to Buddhism, by sending monks along with traders to southeast Asia, and by sending missionaries to the Middle East (Cyrene, Ephesus, Syria, Macedonia, and Egypt are specifically mentioned in his edicts). Helena P. Blavatsky states that these missionaries influenced the Gnostics (CW V:221 fn), Essenes, and Therapeuts (CW X:67). She quotes favorably an article by a French orientalist, M. Émile Burnouf, that the Jews “derived their doctrine of a messiah” from these Buddhist missionaries and that the “Manichaeans were originally Samanas or Sramanas, Buddhist ascetics whose presence at Rome in the third century is recorded by St. Hyppolitus” (Collected Writings 10:67). Furthermore, Burnouf adds, their influence can be traced to the Albigenses (Collected Writings 10:68), a Manichaen sect of southern France during the Middle Ages exterminated by the Inquisition in the thirteenth century. Blavatsky further claims that the “first Gospels, once as canonical as any of the present four, contain pages taken almost entire from Buddhistical narratives, . . . that the whole Christian scheme emanated from the other [i.e., Buddhism]” (Isis Unveiled 2:504), and that, after appropriating Buddhist ideas and attributing them to Jesus, they then appropriated Buddha himself as one of their saints, calling him “Josaphat” (Isis Unveiled 2:579). That there could have been Buddhist, presumably Theravada, influence on Judaism and early Christianity is certainly plausible in light of historical evidence.

Theravadins claim theirs to be the authentic teaching of the Buddha, based on the Pali suttas. In those scriptures there is a clear statement, attributed to the Buddha, that he did not teach “with a closed fist,” i.e., that he denied having an esoteric doctrine. Nevertheless, Theosophical sources staunchly maintain that there was such a teaching. For further information in this subject, see the article on “Esoteric Buddhism.” Since Buddha’s sermons were not written down until after his death, there is no way to be sure that he actually made such a claim. But unlike the Mahayana Buddhists who wrote a number of texts long after the Buddha’s death, Theravada emphasizes the Pali texts and various commentaries on them. Two important exceptions to this are the Dhammapada, a collection of verses composed by several different monks, but based firmly on the ideas in the Tipitaka (Sankrit Tripitaka, literally “three baskets,” named after the manner in which the early scriptures were stored), and the Milindapañha (“Questions of King Milinda [Gk. Menander]”). The latter records questions that the second-century Bactrian king in northwest India put to the Buddhist monk Nagasena and the latter’s answers, certainly one of the best introductions to ancient Theravada — and Buddhism in general. Another important work is the Visuddhimagga (“Path of Purification”) written in the fifth century CE by Buddhagosha. It is more detailed and complex than the Milindapañha and describes with great care the psychology of the Buddhist life beginning with a discussion of virtue, proceeding with a long discussion of concentration, and concluding with an analysis of understanding.

According to all Buddhist sects, the essential problem people face is ignorance that causes their suffering (for development of this concept, see “Buddhism”). Since ignorance is something one can only eliminate for oneself, the Theravada way is essentially an individualistic way. Of course, monks live together in a vihara as part of a community (sangha) and must obey the moral rules set down in the Vinaya. And older monks assist younger monks with advice in understanding the principles of Buddhism. But, in the final analysis, each monk (bhikkhu, literally “beggar”) must apply the code and meditative techniques himself in order to attain nirvana. In Buddhism, there is no concept of “vicarious atonement,” a view with which Theosophy concurs.

One of the most frustrating features of all Indian religion and philosophy, including Buddhism, is the lack of any sense of history. Very few personalities shine through their works — and even fewer are established in terms of dates. Most welcome, therefore, are the Dipavamsa (“Island Chronicle,” literally “Lineage of Luminaries”), Mahavamsa (“Great Chronicle”), and Culavamsa (“Lesser Chronicle,” literally “Lineage of the Tonsured”), which record in verse the history of Sri Lanka up to the eighth century from the point of view of the elders of the Mahavihara (“Great Monastery”) school of Theravada. Even though they certainly do not constitute an objective history, these three works do give us some sense of Buddhist chronology and accomplishments in Sri Lanka unavailable elsewhere.

In the first centuries of the common era, Theravada Buddhism was strongest in Sri Lanka and Tamilnadu (southern India) as well as Southeast Asia. Gradually Mahayana grew in strength and older forms of Buddhism went into decline. By the seventh century, Tantric Buddhism had gained adherents, particularly in Bengal, Bhutan, and Sikkhim. When popular (especially Puranic) Hinduism had a revival during the Gupta Dynasty (fourth-fifth centuries), Buddhism went into decline in India and finally died out when Islam came into India starting in the eleventh century with the Ghaznis and ending with the Moghul Empire (1526-1857).

Christian missionaries, supported by the British rulers in Indian and Sri Lanka, during Britain’s Imperial Period, made considerable inroads into the Buddhist community as well. In fact, it was the Theosophist Henry S. Olcott who spearheaded a reversal of that trend, aided later by other members of the Theosophical Society. After Olcott and Blavatsky left England in January 1879, landing in Bombay on February 17, they took an 1880 side trip to Sri Lanka, where, on May 25, they both took pansil (i.e., accepted the five vows of Buddhism which formally admits one to the religion). Although Blavatsky never became a vegetarian and did little to advance the cause of Buddhism, Olcott did change his diet and became a champion of Buddhism, establishing Buddhist schools as well as Buddhist branches of the Theosophical Society on the island. In order to assist in unifying the Buddhists, he wrote and distributed a Buddhist Catechism (still in print). One of his converts (a Christian whose family had originally been Buddhists) was Anagarika Dharmapala, later to be the founder of the Mahabodhi Society, which helped restore important Buddhist sites in India and has had some small success in reintroducing Buddhism to that country. Olcott was called “the white Buddhist” by his Singhalese admirers and his birthday, August 2, is now celebrated as a national holiday in Sri Lanka.

Even though Zen Buddhism and Tibetan Buddhism are better known and have more adherents in the West, there are Western centers of Theravada Buddhism as well. The Theravada form of meditation — vipassana — is practiced by some people, in part due to the writings of the monks Dhiravamsa, e.g., The Way of Non-Attachment: The Practice of Insight Meditation (Schocken Books, 1975; Turnstone, 1984; Crucible, 1989); or The Dynamic Way of Meditation: The Release and Cure of Pain and Suffering through Vipassana Meditative Techniques (Turnstone, 1982; Crucible, 1989) and Tich-Nath-Hanh, Miracle of Mindfulness: A Manual on Meditation, translated from Vietnamese by Mobi Ho (Boston: Beacon Press, 1975, 1976; revised edition, 1987); or The Sun My Heart: From Mindfulness to Insight Comtemplation, translated from Vietnamese by Anh Huong Nguyen, Elin Saud, and Annabel Laity (Berkeley: Parallax Press, 1988).