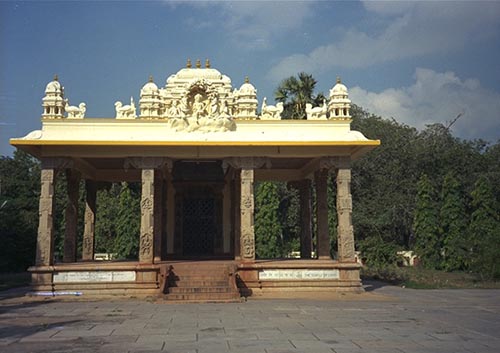 Hindu Temple at the Adyar Estate

The word Hindu derives from a Sanskrit word sindhu, “river,” which was applied to the first large river, now called the Indus, which the Aryans encountered upon their migration into the northwest area of the subcontinent. When the Greeks invaded, they modified the word to its present form and identified the people of the area as Hindus, i.e., “People of the River.” Annie Besant, as well as many Hindus, preferred the term Sanatana Dharma (literally “ancient law” or “eternal religion”) for the religion of the Hindus, although some scholars consider this more a description than a proper name. Manu, the ancient law-giver, seems to have used the term “arsa-dharma,” i.e., “the way of behavior given by the Rishis [ancient sages].”

The most ancient scriptures of Hinduism are found in the Vedic hymns, called suktas, which are attributed to various sages called Rishis, such as Kutsa, Atri, Rebha, Agastya, Kuśika, and Vaśistha. To the collection of hymns was appended, over a period of time, liturgical texts termed Brahmanas, texts presumably written by priests who had retired into the forest, whose texts were called Aranyakas (literally “forest treatises”), and philosophical treatises known as Upanisads (literally “sit-down-near” texts) probably because they were originally a secret wisdom (guhya vidya or gupta vidya) taught to pupils seated near the teacher. Each of the four Vedas — Rig, Sama, Yajur, and Atharva — have these parts to them.This entire corpus of literature was called sruti, literally “heard,” and was considered too sacred to be written down, hence was memorized by the priests (usually anglicized as brahmins). It was transcribed only in the eighteenth century, hence its continuity through the centuries is the most amazing feat of memory in world history. To this corpus of religious literature was added a series of texts called vedangas, “limbs or appendages of the Veda.” These included texts on liturgics (kalpa), the proper pronunciation of the hymns (śiksa), metrics (chanda), etymology of terms (nirukta), grammar (vyakarana), and astronomy (jyotisa). Later, according to scholars (though not to some Theosophists), stories about the various deities (devas), especially the principal ones, Siva and Viśnu, were written in a large corpus of literature known as Puranas, literally “ancient texts”). Also important were two long epic poems, Mahabharata and Ramayana, the former containing the Bhagavad-Gita. These latter texts are known as “remembered” (smriti), that is, traditional, although the Bhagavad-Gita has gained such popularity that its status is practically the same as sruti. In later ages, the religious writings of various saints were added. In other words, Hinduism has an enormous corpus of scriptural literature, which has given rise to a proliferation of various sects of Hinduism, some of which have very little in common with others.

The early Aryans identified their land as Bharata Varsa, “The Land [literally rainy land, varsa] of the Descendants of King Bharata [the progenitor of the people memorialized in the epic poem Mahabharata].” It is the only land where Hinduism, with all its developed stages, came into existence. Its boundaries have been mentioned in the later Puranas and its three regions — Aryavarta, Madhyadeśa, and Brahmarisideśa — have been praised as seats of dharma. Originally these religions lay only in the north, but over time Hinduism spread southward until it encompassed the whole of the subcontinent.

No date can be determined for the emergence of the religion. Hindus generally assume a much more ancient beginning than do modern Western scholars. Since Hinduism does not allow proselytization, except for the modern sect sometimes known as Hari Krishna (or the Krishna Consciousness Movement), one must be born into the religion. When Hinduism spread to some countries in southeast Asia (especially Thailand, Indonesia, Borneo, and Malaysia), those areas were sometimes called Greater India. Later Buddhism and Islam overlaid and largely supplanted Hinduism in most of those areas, as well as Sri Lanka and the islands of Indonesia, except for Bali, which remains predominantly Hindu.