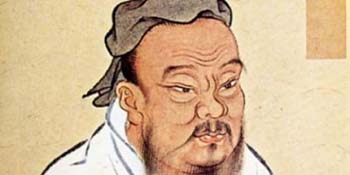 Confucius was one of the most important philosophers of ancient China, and one of only two whose names have been Latinized (the other being the post-Confucian philosopher Mencius or Meng K’e, later called Meng Tzu). He was born K’ung Ch’iu (Kong Chiu in the modern pinyin system of transliteration) in the state of Lu in 551 BCE during the gradual decline of the Chou (Zhou) Dynasty (1122-771 BCE). Tradition identifies his family as formerly part of the aristocracy, but by his time it had declined both in social and economic status. His father died when he was three, and he was raised by his mother. He obviously received an education in ancient literature, for he was very familiar with it and is said to have written commentaries on some of it. He married and had at least one son and one daughter.

At some undetermined point in his early adult life, Confucius decided to devote his entire time to teaching. He is the first person in Chinese history to do so. The texts that he chose for his students, along with the collection of his sayings (Lun Yu, literally “discussions and conversations,” usually translated “Analects”), have become known as Confucian Classics, and in later centuries formed the basis for the Chinese educational system. In addition to teaching, he traveled widely, attempting to convince heads of the various states to adopt his ideas for governing. He died in 479 at the age of 73, having failed in that attempt. It was not until centuries later that his philosophy was adopted and he was given the title of “Grand Master K’ung” or K’ung fu-tzu (Kong fu-zi). He is the only Chinese philosopher to have fu (“grand” or “great”) added to his honorific title tzu.

Confucius (along with Plato) is identified in Theosophical literature as a fifth-round man, which means that he was considerably in advance of the average person in morality and intellect. He is also mentioned ten times in Helena P. Blavatsky’s master work, The Secret Doctrine, and three times in her earlier Isis Unveiled. Despite those references, Theosophists have generally neglected both Confucius and his ideas.

Confucius’s method (tao or dao in Pinyin) for proper administration and overcoming the suffering of common people was to educate them for character rather than for vocation — to develop what he called a chun-tzu (zhunzi), usually translated “gentleman.” Although Confucius claimed not to be an innovator (Analects 7:1), in effect by reanimating (imparting fresh vigour, energy, or activity) the classics (Analects 2:11), he did make significant modifications, most importantly to the idea of a gentleman. In ancient China the term had been reserved for the aristocracy. In effect, Confucius democratized the idea to make it refer to a moral aristocracy, irrespective of one’s parents’ social status. He identified several characteristics of such a gentleman, including moral qualities like courtesy, honesty, humility, and impartiality, which are common to most other moral systems in the world. Important also was filiality (hsiao, xiao), sometimes translated “filial piety” (Analects 1:2 and 2:7). To Confucius it meant not only taking care of your parents, but honoring and respecting them while they were alive and paying homage to their memory in the ancestral rites after they died. It also extended to having proper respect for all elders (especially one’s older brother), for one’s emperor, and for those holding political office. Another important quality was promise-keeping (shin, sometimes translated “trust,” “trustworthiness,” or “good faith”). Confucius identified it as essential not only for interpersonal relations, but especially for government officials. His point was that good government depends upon the trust of the people in their rulers; when that trust is lost, people become cynical; and when the people are cynical, morality declines.

An extremely important aspect of gentlemanly behavior for Confucius was li, often translated “ritual” or “rites,” but implying appropriate action whether in lofty state ceremonies or in daily interpersonal behavior. It involved propriety and good manners. It distinguished a cultured person from a socially crude person. It civilized one’s behavior. In fact, li is somewhat similar in its range of meanings to the Hindu concept of dharma (in its social, not philosophical, use). To Confucius, however, it was not enough just to know the appropriate way to act in all social circumstances; one’s actions should also be motivated by sincerity (Analects 17:9 or 17:11). And he felt that if the upper classes behaved sincerely in socially appropriate ways, this would have a socializing effect on the lower classes as well (Analects 14:41 or 14:44).

Central to all Confucian moral philosophy was shu, usually translated “reciprocity,” sometimes “consideration” or “altruism.” It appears in the Confucian Golden Rule: “[The disciple] Tzu-kung asked, ‘Is there a single word which can act as a guide throughout one’s life?’ The Master said, ‘Perhaps shu: Do not do to others what you would not like them to do to you’ (Analects 15:23 or 15:24).”

As D. C. Lau points out in the introduction to his translation of the Analects, shu or reciprocity is only the negative half of the Golden Rule. The other half is what Confucius called chung (jong), sometimes translated “conscientiousness” or “doing one’s best.” Neither translation adequately captures its meaning. Chung really involves the full development of one’s own heart. In other words, as Lau puts it, “shu is the method of discovering what other people wish or do not wish done to them” by analogy with how one would like to treated in similar circumstances; and chung is putting into practice, to the best of one’s ability, what one had realized through shu. That, indeed, amounts to doing unto others what one would have them do unto you — the Golden Rule.

Finally, and most importantly, becoming truly human for Confucius meant becoming humane (jen or ren, pronounced something like “zrun”). It was such a lofty ideal for Confucius that he claimed he had never met anyone who completely exemplified it, and declined to claim the virtue for himself (Analects 7:33 or 7:34). Yet he also felt this quality was within anyone’s grasp, if one would just make the effort to cultivate it (Analects 7:29 or 7:30). At the present stage of human evolution, we are driven more by desire than by either thought or wisdom. We do not allow our attitudes and opinions to be governed by an impersonal intelligence; that will not come, according to Theosophical theory, until some time in what is termed the fifth round. Yet the potential for dispassionate thought is inherent in us right now — is “right here,” as Confucius put it in Analects 7:29 (or 7:30). So, although virtue is its own reward for Confucius, it also humanizes us, makes us more fully human beings, less like animals driven purely by instinct and desire.

Confucius also made a distinction between what he termed “learning” (hsueh, xueh) and what he termed “thinking” (ssu). In Chinese, hsueh implies a change in one’s behavior, whereas ssu is purely theoretical, abstract thinking, divorced from any change. D. C. Lau states that “hsueh enables a man to become a better man morally. Thus morals, in the Confucian view, are akin to a skill.” This skill had more than just a superficial, behavioral effect on oneself and others. It could have an almost magical transformative effect as well. That appears in Confucius’s discussion of te (de, pronounced something like “teh”), usually translated “virtue,” but implying a sort of power, more like “moral force.” It is in his discussion of te that Confucius comes closest to any metaphysical ideas. While at times he speaks as if te were purely behavioral (Analects 4.25), at other times he seems to impart a magical or occult effect to it: “The nature of the gentleman is like the wind, while the nature of the small man is like grass. When the wind blows over the grass it cannot help but bend” (Analects 12.19, 3.11, and 15.3 or 15.4).

However one understands this power of a moral person, it was the capstone of one’s human development, the quality toward which every ruler of every state should aspire. It was something which only a Sage had in its fullness, though a gentleman had it to a lesser degree. Confucius felt he had developed a Way (tao) which would enable us to attain this quality, which would make us not only more moral but also more humane, therefore more truly human. All of this makes Confucius worthy of study by Theosophists.

The foregoing is the Confucius known to scholars. H. P. Blavatsky, however, seems to be speaking about quite a different person in most of her Secret Doctrine references. Three times she mentions a “Great Extreme” and “straws” to which, she says, Confucius referred and never explained publicly. Confucius is credited with having arranged the hexagrams of the I Ching (Yi Jing) and commenting on them; perhaps “straws” refers to the yarrow stalks generally used in consulting it, and the “Great Extreme” refers to its concept of a “great primal beginning” (t’ai chi or taiji) or to the hexagram Ta Kuo (Da Guo), “Preponderance of the Great.” Blavatsky further claims that Confucius practiced divination, which could be true if he commented on the I Ching, and that he taught the sphericity of the earth and the heliocentric system (Secret Doctrine 1:441), for which we have no confirming evidence at all.

If Confucius has been generally neglected by Theosophists, the post-Confucian philosophers have been ignored completely, although Mencius especially ought to be of interest. Blavatsky’s only comment about them is that they were said not to believe in “Spirits.” Certainly that is true of the early third-century BCE philosopher Hsun Tzu (Xunzi) who was a strict naturalist. It is less obviously true of Mencius (circa 371-289 BCE). But that is a relatively unimportant aspect of post-Confucian philosophy, in which the debate centered on whether human nature was inherently evil (as Hsun Tzu claimed) or inherently good (as Mencius claimed). Mencius offers an intriguing argument in support of his position. It is sometimes called “the child at the well” (Mencius 2.A.6). Paraphrasing it: suppose you were to come “suddenly” — that is, unexpectedly, quite without warning — upon a child about to fall into a well, your involuntary reaction would be to gasp in consternation. And that would be true whether the child was known to you or was a complete stranger. This proves, Mencius argued, that you have innately a “heart of compassion.” And that is true even if you decide immediately after your involuntary reaction not to get involved in saving the child. It is this “heart of compassion” — along with a “heart of shame,” “heart of propriety,” and “heart (or sense) of right and wrong” — which can be nurtured by moral education into the Confucian virtues of humaneness (jen), righteousness or dutifulness (i), propriety (li), and wisdom (chih). It is a compelling argument, apparently based on Mencius’s personal experience and observation of the behavior of others. It is an optimistic view of human nature, much in line with that of Theosophy.

We have 562 guests and no members online