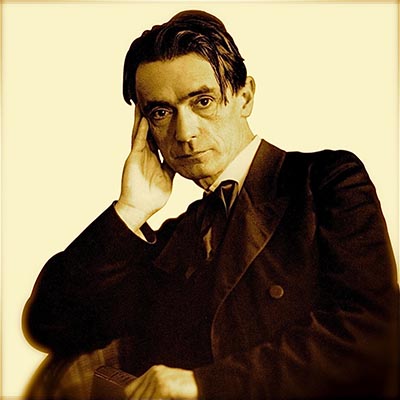 Steiner was born in Kraljevic, Upper Austria on February 27, 1861. As a fifteen-year-old youth he made the acquaintance of a herbalist who not only knew the species, families, and life of plants, but also their secret virtues. That herbalist had the ability to see the etheric form of plants and could contact the elementals associated with them. This acquaintanceship stimulated Steiner’s latent psychic abilities so that later Steiner claimed that the herbalist was a messenger from a Master of the Wisdom. From the age of eighteen Steiner had what he described as “a direct and involuntary seeing of things.”

At university in his late teens, Steiner studied Kant, Fichte, and Schelling. He also studied mathematics, chemistry, mineralogy, botany, and zoology. “These studies,” he said, “afford a surer basis for the construction of a spiritual system of the universe than history and literature.” Steiner outlined his intellectual mission as “To re-unite science and religion. To bring back God into Science and Nature into Religion.”

Steiner earned the degree of Doctor of Philosophy in Vienna, with a thesis entitled Truth and Science, and wrote a number of articles on zoology, geology, and the theory of colors which included Theosophical ideas. He was editor of a weekly journal called the Deutsche Wochenschrift (German Weekly). In 1890 Steiner asked to superintend the re-editing of Goethe’s scientific works (at Weimar) and shortly afterwards he published two works, Truth and Science and The Philosophy of Liberty.

Steiner joined the Theosophical Society in 1902 in Berlin, entering not as a student of the Eastern tradition, but as an initiate of Rosicrucian esotericism who recognized the significance of Hindu philosophy. He was convinced that his work lay in the endeavor to unite Eastern and Western traditions and was assisted in that work by Marie von Sivers, a Russian by birth with a command of English, Russian, French and German languages. When he was appointed General Secretary of the German Theosophical Section, von Sivers became his assistant. In 1908 he published a work with a foreword by Annie Besant, dealing with the attainment of knowledge of higher worlds.

In about 1912 a problem arose in the German Section. Under the auspices of Annie Besant and Charles Leadbeater an organization was formed called the Order of the Star to promote the work of J. Krishnamurti. The German Section ruled that members of that Order were not eligible to join the Theosophical Society in Germany. Since that contravened the rules of the Theosophical Society, it caused considerable dissension, and Besant was directed by the Council at Adyar to write Steiner. When Steiner did not reply to that letter, the Council canceled the charter of the German Section.

Steiner consequently decided to form his own organization, which he called the Anthroposophical Society. Steiner’s reputation and charisma ensured the success of the new society, which eventually spread around the world. It advocated an esoteric approach to many activities, particularly in health and education. Steiner Schools, called Waldorf Schools, still operate in many countries. Steiner believed that humanity originally participated in the spiritual processes of the world through a dreamlike consciousness out of which the more limited but awake consciousness of today evolved. He believed that it was possible for humans to regain awareness of their essential spirituality through right training.

Steiner died at Dornach, Switzerland, on March 30, 1925. His published writings include The Philosophy of Spiritual Activity (1894); Theosophy (1904); The Way of Initiation (1908, foreword by Annie Besant); Knowledge of Higher Worlds and Its Attainment (1909); OccultScience, an Outline (1913); Christianity as Mystical Fact (and the Mysteries of Antiquity) (1914); ARoad to Self-Knowledge (1918); Story of My Life (1924); and numerous articles in The Theosophist journal while Steiner was still a member of the Theosophical Society.

We have 421 guests and no members online