Burnier, Radha (née Sri Ram) (1923-2013) was the seventh International President of the Theosophical Society (Adyar). Radha Sri Ram was born on November 15, 1923, on the estate of the Theosophical Society in Adyar, Madras (now called Chennai), India, where she spent her childhood. Her father, Nilakanta Sri Ram, a life-long Theosophical worker and a collaborator of Annie Besant’s, was the fifth International President of the Society. Her mother, Srimati Bhagirathi, was also an active member. The family was Brahmin, but, as Theosophists, they did not observe the rules of segregation from other castes prevalent at the time. In 1951 she married Raymond Burnier, a Swiss citizen, and thereby became a Swiss national. 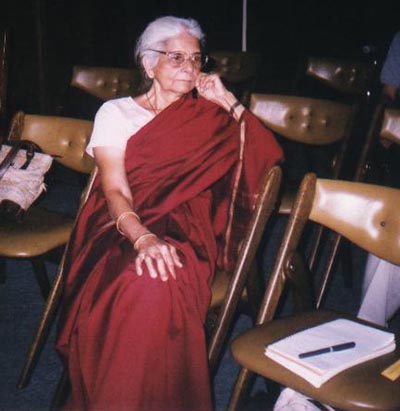 Coming from a Theosophical family, Radha early developed an interest in philosophical and spiritual questions as well as a sense of values and concern for the underprivileged. A childhood spent in the beautiful Adyar estate fostered a love for Nature and a sensitivity to its beauties. Having met during her childhood many people from various parts of the world, promoting harmony and cooperation among all peoples was, practically from the beginning, a way of life for her.

She received most of her basic education at Theosophical schools and, in 1942, was the first student to graduate in classical dancing (Bharata Natya) from the international art academy of Kalakshetra in Madras, founded by her aunt Rukmini Devi Arundale. She subsequently gave dance recitals in many cities in India and Europe and played a major role, with dancing, in the film The River (1951), directed by Jean Renoir. That film has been critically regarded as one of the greatest color films.

Radha also pursued an academic career and obtained an M.A. degree in Sanskrit from Benares Hindu University, earning first place in the examination. In 1984 she was awarded an honorary degree of Doctor of Letters by Nagarjuna University in recognition of her “distinguished contribution to the advancement of learning and the promotion of human values.”

Radha joined the Theosophical Society in 1935 and was President of youth and adult lodges in Adyar and Benares for several years. She worked as Librarian and in other capacities at the Indian Section headquarters from 1945 to 1951. Repeatedly elected General Secretary of the Indian Section of the Theosophical Society, she held that office from 1960 to 1978. She served as President of the Madras Theosophical Federation from 1959 to 1963. She was Director of the Adyar Library and Research Center from 1954 to 1980, being also the general editor of its oriental publications as well as its journal Brahmavidya. She herself translated from Sanskrit the Hathayogapradipika, the dance chapter from the Samgita Ratnakara, one of the most important Indian musicological texts.

Burnier was a member of the Society’s General Council from 1960 onward and also served for many years on the Society’s Executive Committee as well as the Finance Committee and the Theosophical Publishing House Council. She was elected seventh International President of the Theosophical Society in 1980 and re-elected in 1987, 1994, 2001 and 2008. In addition to being President of the Society, she held the following offices: Head of the Krotona Institute of Theosophy in Ojai, California, and of the Manor Foundation in Sydney, Australia; President of the International Theosophical Center in Naarden, Holland; Chairman of the Olcott Education Society (OES), whose concern was the education and welfare of children from the poorer classes and which administered the Olcott Memorial School, the HPB Hostel for the underprivileged, and the Social Welfare Center at the Society’s headquarters. Radha was also chair of the Besant Education Fellowship, sponsoring several schools in India; founder and President of the New Life for India Movement, which has been working since 1968 for the promotion of right citizenship, right values, and the use of right means among Indians, especially through its journal Wake Up, India; and president of the Environmental Society, Madras.

From 1960 onward, Radha lectured throughout India and the world to members and the public on Theosophical, philosophical, environmental, and social issues. She was the guest speaker at many Theosophical conventions, congresses, and summer schools. She also spoke in universities and on the radio. As president of the Society, she was the editor of its international magazine, The Theosophist. Her editorials, called “On the Watch-Tower,” treated topical themes with great insight and were frequently translated into other languages. Radha was the author of several books: No Other Path to Go; Truth, Beauty and Goodness; The Way of Self-Knowledge; The Universal Yoga Tradition; and Human Regeneration; as well as many articles in The Theosophist and were reprinted or translated in other Theosophical journals around the world.

Soon after Radha’s election as Theosophical Society president, J. Krishnamurti accepted her invitation to visit the Adyar estate, after an interval of almost half a century. Thereafter, when in Madras, he was a frequent visitor to the estate. Burnier had known him since childhood and had a friendly relationship with him. Under her inspiration, many members of the Society recognized that Krishnamurti’s teachings are fundamentally Theosophical, especially in their uncompromising openness to what is.

Burnier’s aim was to invest the Theosophical Society with a renewed sense of purpose, social and ecological awareness, and a deeper spiritual insight. Consequently, she stressed social values and resistance to any form of corruption. She was committed to ecology, animal welfare and support for the downtrodden. Her life was thus one of applied Theosophy.

We have 368 guests and no members online