Druidism was the religion of the Celts of ancient Gaul and the British Isles. Description of their religion is difficult since very few authentic written records exist; those that do exist are not first-hand. According to the Stoic philosopher Poseidonius, the main tenets of the Druids were that the soul of man is immortal and that the universe is indestructible, although it was periodically consumed by fire or water.

The word “Druid” comes from an ancient Celtic source referring to a tree. An early reference to Druids was by Julius Caesar, about 50 BCE. Caesar wrote of the Druids, “They hold aloof from war and do not pay war taxes; they are excused from military service and exempt from all liabilities. Many young men are tempted by these advantages and come to the Order to receive training that lasts about twenty years.” The popular idea of Druids performing rituals at Stonehenge and gathering mistletoe with golden sickles lacks any documentary foundation, but has persisted in oral tradition. 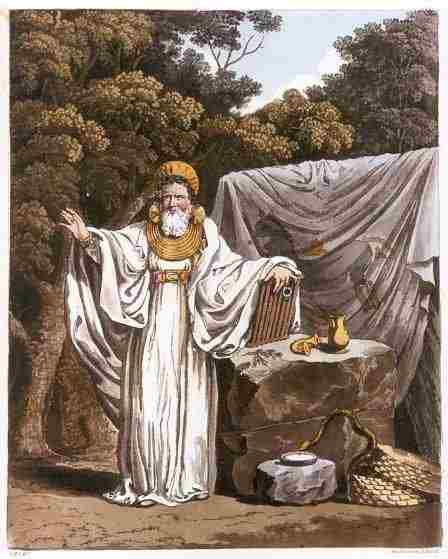 Helena P. Blavatsky wrote about Druids in positive terms, as in The SecretDoctrine (2:756): “The mystery veiling the origin and the religion of the Druids is as great as that of their supposed fanes [temples] is to the modern Symbologist, but not to the initiated Occultists. Their priests were the descendants of the last Atlanteans, and what is known of them is sufficient to allow the inference that they were eastern priests akin to the Chaldeans and Indians, though little more. It may be inferred that they symbolized their deity as the Hindus do their Vishnu, as the Egyptians did their Mystery God, and as the builders of the Ohio great serpent mound worshipped theirs — namely under the form of the “Mighty Serpent,” the emblem of the eternal deity TIME (the Hindu Kala). Pliny called them the “Magi of the Gauls and Britons.” But they were more than that. The author of IndianAntiquities [Thomas Maurice] finds much affinity between the Druids and Brahmins of India. Dr. Borlase points to a close analogy between them and the Magi of Persia; others will see an identity between them and the Orphic priesthood of Thrace — simply because they were connected, in their esoteric teachings, with the universal Wisdom Religion, and thus presented affinities with the exoteric worship of all.

Like the Hindus, the Greeks and Romans (we speak of the Initiates), the Chaldees and the Egyptians, the Druids believed in the doctrine of a succession of worlds, as also in that of seven “creations” (of new continents) and transformations of the face of the earth, and in a sevenfold night and day for each earth or globe.” In the same work (2:760), Blavatsky wrote, “The Druids believed in the rebirth of man . . . in a series of reincarnations in this same world; for as Diodorus says, they declared that the souls of men, after determinate periods, would pass into other bodies.”