I. K. Taimni (1898-1978) was born in Lucknow, India, in a Kashmiri Brahman family. His father was Pandit Prem Kishen Taimni. Taimni’s mother died early, and he was brought up by his grandmother, who, a devotee of Lord Rama, lovingly called him “Sri Ram.” With only a younger sister and an affectionate but reserved father, his childhood was lonely. 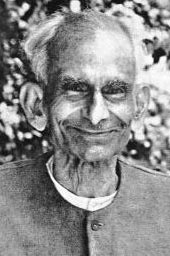 The family moved to Allahabad, where Taimni studied in a government college and earned an M.Sc. in chemistry. He had a brilliant academic record and joined the teaching staff at the University. In 1928 he earned a Ph.D. in inorganic chemistry from London University and continued to work at the Allahabad University until his retirement.

Taimni was instrumental in constructing the building of the Anand Lodge in 1935, and he contributed his own library to the Besant Memorial Library located in the Lodge. He worked as Secretary of the Lodge and later as President. He established the Anand Publishing House for the publication of Theosophical literature. A person of warm and affectionate nature, humility and unassuming ways, he avoided publicity and did not like being photographed. He died at Lucknow on June 7, 1976.

Taimni’s main contribution to Theosophy was through his books, some of which were translated into several languages. His writings combine deep insight into Eastern wisdom, knowledge of occult philosophy, and an understanding of physical sciences. He published a number of translations of Kashmir Saivism texts.

Taimni’s principal publications by the Theosophical Publishing House are