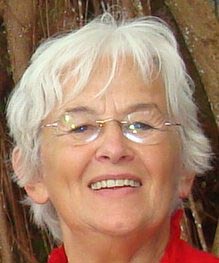 My husband Wouter and I have had a rich and very active Theosophical life. Nowadays we might be a little less active, but still visit various lodges and events, such as the last held ITC conference in Naarden which was a tremendous experience.

In 1957 I came in contact with vegetarianism and was introduced to Theosophy for the first time, thanks to the Van Beers family; my husband’s family. In those early years we organized regular study-evenings at our home in the city of Utrecht. The YT was an autonomous organization and also held symposiums. Eventually the YT was dissolved, but I would wish that younger people would join the TS again.

Over the years Wouter and I organized every summertime art exhibitions at the International Theosophical Centre in Naarden, seminars in collaboration with the School for Parapsychology, but also classical concerts with young and talented musicians who had just graduated. Next to all this we were also involved in the yearly Summer Schools organized by the Dutch Section.

In 1976 I joined the board of the Dutch Section and served 6 years as its vice-General Secretary together with Arend Heijbroek who was the General Secretary. After this period I had a valuable experience as editor-in-chief of the magazine Theosofia, the Section’s periodical. Furthermore I had the opportunity to give talks in various Lodges all over The Netherlands and abroad.

Theosophy has broadened my outlook on religion, people and on the world.

As a child, I couldn’t agree with the teacher at my school whose prayers were only meant for the children of Christians. I thought all creatures are children of God and not only those who belonged to the Christian faith. My desire was to become a teacher at a school without distinction of race, religion or colour.

Thanks to Theosophy I came to realize the deeper meaning of life more and more. Even my approach to teaching and education changed; more relaxed and focussed on the individual pupil. During one of the annual sessions of the School of the Wisdom in Adyar, I gave an official talk on that subject. I participated in that particular session of the School for the period of two months.

Theosophy opens windows towards religion, philosophy, politics and last but not least compassion for the earth and all living beings.

5.What is your favourite Theosophical book and why?

Well, it isn’t easy to say which Theosophical book would be my favourite, but my first and most precious one is At the feet of the Master by Alcyone. I had that little gem in my possession even before I became a TS member. The Secret Doctrine and The Voice of the Silence are also favourites. I just like to read the Stanza’s ofDzyan for their poetical sound and deep wisdom that goes beyond my thinking.

The biggest challenge is to make clear how important it is that there is UNITY of Life, and to find ways of cooperation with organizations who have similar or matching interests. The Theosophical movement should become more visible as a serious and unsectarian stream, making it clear that there is freedom of thought.

I wish for the future of the Theosophical Society that there will be more dialogues with modern scientists in the field of philosophy, art, physics, biology and environment. The initiative should come from the TS. How to accomplish this? Well, that remains an open question.

Now I am older I realize how much Theosophy, the Ancient Wisdom, is part of my life. It is not only the study, nor the theory, but the inner Guidance that helped me to become aware of the Unity of Life with all its implications.