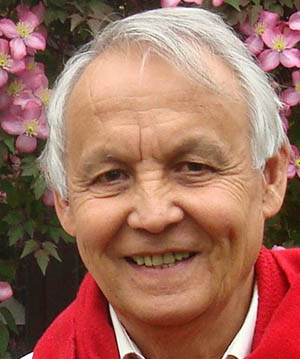 My wife Nell might have given a similar answer in her interview. We have been very active for many years accomplishing many objectives and holding various positions. Now, a little older, we still visit some Lodges and participate in events of interest.

While still in the Dutch East-Indies, my grandparents and my mother were active Theosophists and after the war, upon arrival in The Netherlands, we picked up the threads again. First I joined the International Order of the Round Table, founded by the Theosophist Herbert White. The ceremonies of the order and all further activities were held on the premises of the International Theosophical Centre in Naarden.

In 1961/1962, I joined the Young Theosophists (YT). This very active group often came to our home in Utrecht for study courses and lectures. In February 1967 I became a member of the TS-Adyar. In due course I took the position of chairman of the Bilthoven Lodge until I got involved with the work for the Utrecht Lodge. Later I was active as the chairman of the Utrecht Lodge as well, and I still am a member of the Theosofia Foundation.

I am particularly and deeply connected with that splendid International Theosophical Centre in Naarden, were I served for more than 30 years on the board. It was possible for me to initiate a great number of diverse activities. One of the many highlights was the opening of the newly built Besant Hall in 1970 in the presence of Rukmini Devi who was the head of the Centre.

My aim was to introduce people to Theosophists and Theosophy and since, though my regular work, I dealt with art and artists of all kinds, for a number of years I was able to organize art expositions with the assistance of a team of young Theosophists. The theme we used for those displays was “Art creates communication.” In collaboration with my wife Nell we also arranged classical concerts with young and talented musicians, as well as seminars dealing with occidental studies in conjunction with the renowned Institute for Para-Psychology in Utrecht.

I can be very brief: Theosophy encourages me to live in balance and harmony with nature as a whole. Theosophy made me aware of the fact that there is unity. The teachings of H. P. B and the Masters gave me insight and above all trust in life.

Actually, I must admit that I don’t have a special or favorite book. The Voice of the Silence inspires me to live a real Theosophical life, while H. P. B.’s The Secret Doctrine is a great source of knowledge and wisdom.

The challenge of the TS Adyar, and in that respect the challenge for all the other Theosophical traditions, is to make very clear that there is Unity, there is but one Life, and that all is interconnected!

“It is time that Theosophy should enter the arena!”

May the TS exist till the “objectives “are fulfilled and beyond.