Science and Spirit – The Electric Universe and your Body

For the past four years I have led an internet group called the Oakland Consciousness Meet-Up group. Eight to twenty people meet monthly in my home. Our focus is on science and the paranormal. We also delve into Kabala, I-Ching, prayer healing, reincarnation, mental telepathy, Near-Death Experiences, etc. Most meetings include light refreshments and meditation. 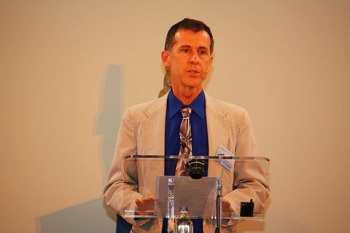 Garrett Riegg giving a talk in The Netherlands

This is a way to encourage spiritual pursuits and to introduce people to Theosophy and the Occult. Several MeetUp members now study The Secret Doctrine with our lodge. The following are notes from our most recent MeetUp on “The Electric Universe and Your Body”:

Nine of us gathered to study the nature of the universe and how our bodies relate to “strange forces” which are largely ignored by our popular culture.
Our knowledge of the universe is comparable to Columbus discovering America before he realized that it was a new and different continent. Science has lots of data but it is searching for a comprehensive and consistent picture of the universe that would include quantum mechanics, Einstein’s relativity and new evidence of psychic and spiritual realities. 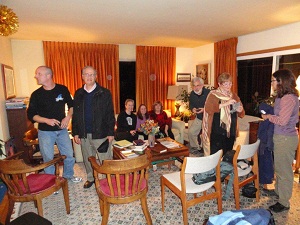 The End of Materialism

Garrett passed out excerpts from The Bond by Lynn McTaggert. Quantum mechanics has liberated all of the other sciences, including psychology, to look again at what used to be considered impossible events such as mental telepathy, heart waves, faith healing, and remote viewing. Physics now provides a theoretical model in the subatomic realm where probability, waves and energy govern.

In line with Einstein’s famous equation (E=MC2), many physicists now think of matter as condensed energy. Others see energy itself as an expression of Consciousness related to the Akashic Field. Sometimes this invisible field is referred to as the Living Matrix (as in the film) or the  morphic field, particularly as coined by Rupert Sheldrake.

We discussed some promising studies of earth’s electromagnetic field and how it interacts with human beings.  Random event generators (REG) around the world reliably register emotional events affecting millions of people such as a Royal Wedding, the 9-11 destruction and New Year’s Eve celebrations.

The eleven-year cycle of sunspots and occasional solar storms is well known to disrupt earth’s atmosphere and potentially destroy electrical and electronic systems, including computers. 2012 is a prime year for solar storms. Did the Mayans foresee this, too?

We are grateful that science is beginning to study telepathy, meditation, Reiki and similar “non-physical” modalities. Since 1970, a German physicist, Fritz Popp, and others have measured bio-photons or small particles of light given off by your fingertips and other parts of the body. (The Bond, page sixty three)  He and his colleagues have discovered that we all have photons streaming from our hands but healers have many more photons coming out of their hands and particularly the dominant hand when they are doing healings. There is also considerable light coming out of the belly which is what would be predicted by Qigong, which refers to that area as the dan tien.

These photon emissions have patterns of activity matching sunspots and other solar influences.

Other studies cited by McTaggart show that healers dramatically change the electromagnetic field around their bellies during healings. The question is, is it the electromagnetism or the light, or what, that is actually transmitting the healing?  Or are these other things just side effects that go along with healing?  Theosophy would say that there is something even deeper than electromagnetism and physical light. Ancient wisdom called it the akasha or the astral.

We briefly reviewed the findings of HeartMath with regard to how heart rate variability becomes very smooth and steady when we have thoughts of appreciation, kindness or love. Otherwise the space between our heartbeats is totally variable or volatile like the stock market.

HeartMath described the unconscious impact we have on each other where our heart waves influence the brain waves of those around us up to at least twelve feet. We can also measure the correlation of brain waves between people who hold hands or even touch their legs together. This kind of entrainment is the same way that the heart gets all the other organs in the body to be in rhythm, so to speak, when we are in a good mood.

In our brains, mirror neurons experience and act out whatever we see is happening to other people around us. It is as if our brain is experiencing the same feelings or activities, even though we do not move and may not even be aware of our own feelings. According to the researchers, these effects are automatic and cannot be stopped. But most of them are in our subconscious (ibid., page sixty).

We watched several of the videos from the Theosophy Watch web article on “The Astral Virgin.” The first one dealt with random event generators and was moderated by Dean Raden. Another one involved an electric man in Serbia who could handle six hundred volts which is normally fatal. Putting a rod near him would produce a large spark. He demonstrated how he could light fluorescent tubes just by holding them. These anomalies are unexplained by current scientific ideas.

S. shared an experience that moved her deeply. She awoke one night after a vivid dream. She felt totally energized. She woke up her partner, telling her that she felt like she could do anything now. She looked around the room and spotted a small space heater. Without much thought she began concentrating on the heater and it suddenly surprised them both by levitating about two feet in the air and turning itself on. After a few seconds she realized what was happening, felt a twinge of concern and at that moment the heater fell back down to the floor. The experience was quite unnerving for her and she has not had a similar experience of psychokinesis.

We were most fascinated by two videos on kirlian photography showing auras of different colors around people’s fingers and other body parts. The colors of the auras would change with the emotions of the person being photographed. This kind of photography has been by psychologists to determine the state of the client’s emotions and the reaction of a couple to their therapy. It has also been used in matchmaking to determine a couple’s compatibility.

One of the most striking things about kirlian photography is how it will continue to photograph an aura even after a portion of a leaf or flower has been cut off. There is something still there even when the physical body has been partially dismembered. This may also be true of amputees and may explain why amputees often feel the missing limb for days or weeks after it has been amputated.

Some members shared their own experiences with kirlian photography. Alia’s son, when he was in grade school, actually experimented with a camera that was able to produce kirlian-type photographs. Sue and Akash had also studied this type of photography and passed around an excellent book on the subject.

It is becoming well known that lifestyle and emotions have an impact on our bodies. Fifty years ago most doctors and scientists felt that the body was an independent physical organism that was not affected by emotions or thoughts. Now even the “main stream” knows better. For example, most heart doctors and big hospitals like Kaiser are touting attitudinal and lifestyle changes for health.

In our discussion of Reiki healing Cathy shared about an urgent healing during a backwoods hike when medical care was far away. The healing was probably the most dramatic we had ever heard of, involving the closure of a gaping wound. She felt the support of the group all around her and did it with another healer. Group intention can be very strong.

In speaking about Reiki healings we contrasted that with a secular approach to hands-on healing that was developed by a psychic and then tested by William Bengston. Although he has his Ph.D. in sociology or a similar field he worked with many doctors and hospitals to test his system of healing.

His primary experiment has been done over ten times with consistent success. He has twelve mice injected with a form of breast cancer which is always fatal within twenty eight days. No mouse was ever known to survive longer.

He trained four students, most of whom were skeptical and unbelieving, to learn to concentrate on imagining positive, happy outcomes to twenty different life goals chosen by each one. They learned to review these like a slide show in their minds as they held their hands around the cage of six of the mice. They did this for one hour each day. At the end of two or three weeks the mice had developed huge cancerous ulcers but then the ulcers turned black and were sucked back into the body. Suddenly all six mice were completely free of cancer. Even if they were injected with more deadly cancer cells, they had immunity for their entire two-year lifespan. The control group all died with a few telling exceptions.

We explored other ramifications of this experiment. The first tests were done with coordination of the biology department at St. Joseph College in New York. Similar tests were done at ten other institutions. All were successful!

It appears that even non-believing humans have the ability to heal other living beings, provided their minds have a positive outlook.

Another experiment at the Institute of HeartMath showed that a group trained to bring up positive images were able to use their own mental intention to tell DNA in a separate control room to wind up tighter. This simple test is easy to run and quite reliable in its results. The experiment was written up in a peer reviewed Scientific Journal.

Our discussion also went back to page seventy six of The Bond to consider how stress and Western ideas of ambition and success can be very hard on the body. Studies of Japanese men who have migrated to California show that what they ate did not apparently increase their rate of heart disease but their change in lifestyle with fewer friends, family and community was a huge factor in their lifespan.

On the next page she mentions a study in Alameda County showing that those who felt lonely or socially isolated were two or three times more likely to die from heart disease and other causes than those who felt more connected. The biological fight or flight mechanism is subdued when we have a companion present or when we even think about someone else who we believe would support us emotionally. Having a pet gives a similar protection and often results in lower blood pressure.

The best way that has been demonstrated to prevent negative thoughts and influences coming to us from others (voodoo) is to focus on your own path or higher goals in your life. By tuning into your own gifts and what you can do for your community, you somehow become immune to the negativity around you.

Akash compared this effect to the way that doctors can treat hundreds of sick patients during an epidemic and yet they do not get sick themselves. Perhaps their immune system works better because they are caring and giving to others. On that high note we ended the meeting.

To see our past class notes (51) and learn about MeetUps, here is the link: