Our Unity - Some thoughts about the phenomena of Brotherhood

Addition by the author:

ITC is really trying to make steps towards unity among Theosophists. As a young and naive Theosophist I very much respect and support the activities of ITC. I don’t believe that Theosophist of all Paths should constitutionally merge, because that I think would be a loss. We should however, demonstrate in practice that we willfully can cooperate with one another, inspired by the same source, and willfully understand and “try” to respect the different approaches, positions and preferences of others, while at the same time our “small” personalities should never get in the way.

It is so much easier to love the neighbor of someone else, instead of loving our own neighbor. Our presentation of brotherhood is sometimes really exotic. We can philosophize about our union with other groups, religions and traditions which have no direct connection with us and are so different, so distant from our own background. We so very easily show respect through invitations, visits, being present at their very different rituals and spiritual practices. We feel the brotherly chain, talking about it and enjoying our brotherly input and connection with humanity.

But when those differences become really miniscule, when there is almost no distinction between traditions, the real challenge is revealed. For our personalities those differences are mountains, but for our souls they are just petty molehills.

Would it be possible to show respect for those who left us, those who thought that something had to be changed, and only changed their view a bit, but were outlawed? For the younger who think that they know it all, and also for the older, who also think they know it all?

Let the famous Emo Phillips joke from “the Guardian” speak for itself:

So, dear brothers and sisters, let's not push each other over:)

“Lift thy head, oh Lanoo; dost thou see one, or countless lights above thee, burning in the dark midnight sky?”

“I sense one Flame, oh Gurudeva, I see countless undetached sparks shining in it.”

“Thou sayest well. And now look around and into thyself. That light which burns inside thee, dost thou feel it different in anywise from the light that shines in thy Brother-men?”

“It is in no way different, though the prisoner is held in bondage by Karma, and though its outer garments delude the ignorant into saying, ‘Thy Soul and My Soul.’ ”

Freshly inspired from International Theosophy Conference and the International Theosophical Centre in Naarden, I will try to put into words some reflections on Unity. We were directing our thinking to the far, but not so far, future of 100 years from now. What would become of Theosophy, where will the unity be, what would the religion be, will it be ... ? If you are sincere in your thinking, concentrating with an open, attentive, and quiet mind and with fairly quiet preconceptions (also the right Theosophical ones), you can catch a glimpse of devachan on Earth.

In 100 years there will be no Theosophy as it is today. There will be only Theo-Sophia, divine wisdom, real, present, unfiltered, undogmatic, non-superstious, poured directly from the source and “undividedly” manifested in countless aspects and ways. Knowing the one and understanding the many will be present. The gap between the higher and lower will be built, humanity’s Antahkarana will reach the point of no return. That is in fact already happening today, we are just lacking the inclusiveness of the soul and are still dwelling on the exlusivity of the personality.

One work that inspires the many and not the many who all want to be the only!

There will only be one religion and that is the religion of the one and the many, millions of approaches and none more right nor wrong than the next. So colorful, so joyful, full of life, authenthicity and sincerity. Because beauty is not uniform, everybody will know that there is only one: one source, one divine Mother, one divine Father, one Absolute. Not even the slightest doubt will exist about that because of the viveka of whole humanity. And so ... not even the slightest disrespect for different traditions, ways or approaches.

Dr. I. K. Taimni used a beautiful and such a simple picture representing the one and the many: 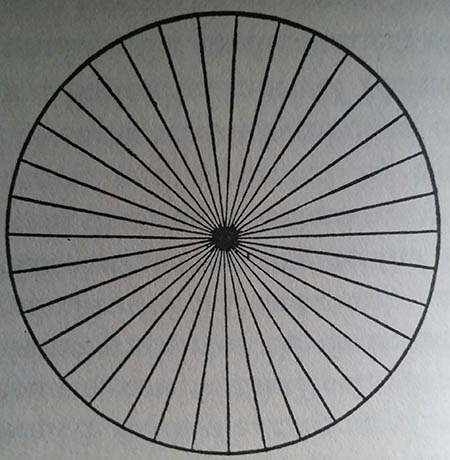 The One and the many in TAIMNI - Men, god and the Universe

Physical world is the expression of the one in many – unity in diversity. And that is, I think, its beauty.

I haven’t yet touched on the subject of the brotherhood of all because, at least among the Theosophists, brotherhood should not be just a beautiful doctrine or dogma but a living fact. We are getting there, but I think we should speed the pace up a bit if we look at the world.

I’m not alone in thinking that in the next ten years we can anchor the truth of brotherhood so deep into the fibre of humanity on the manifestational level, that it will stay and facilitate the next 100 years to come. And so, looking from this viewpoint, prepared to work, for growth, changing and staying firm where needed, open for cooperation, trying to understand each other and sincerely finding and showing respect for others, others’ work and sincere effort, we have such a beautiful responsibility to fulfill. And that is good and can make us really happy.

We have 322 guests and no members online