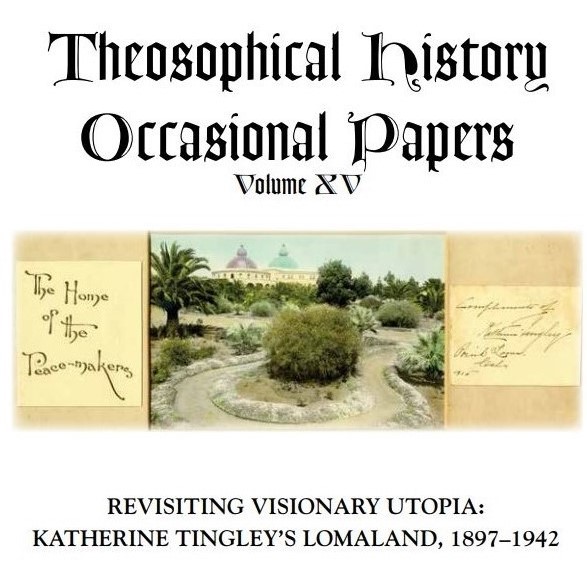 Revisiting Visionary Utopia, Katherine Tingley’s Lomaland 1897-1942, is an overview of the Lomaland exhibit at San Diego State University on the cultural aspects of the Theosophy based Lomaland community in San Diego from 1897-1942.

The publisher, James Santucci[i], writes in his foreword:

In 1898, the Society was renamed the Universal Brotherhood and Theosophical Society with Mrs. Tingley serving as its “Leader and Official Head.” The direction that she took reflected her activism in applying Theosophical principles, principal of which was the advancement of an educational program known as “Raja Yoga,” which in turn emphasized an integration of physical, mental, and spiritual training. Those who resided in the community were expected to acquire proficiency in various areas of the sciences and arts. Most were expected to engage in more practical pursuits required by the community’s needs, such as agriculture and horticulture, in addition to engaging in community outreach programs that reflected Theosophical principles, notably dramatic and musical productions. As to be expected, publication of the community’s Theosophical teachings and activities occurred principally through its written tracts and ongoing research. The range of activities is quite impressive as illustrative in Greenwalt’s California Utopia. What follows in the present volume is a confirmation of the contributions of an extraordinarily talented community not only to the local environs of San Diego but also to the nation.

While there are many publications that highlight various aspects of the Theosophical community in Point Loma, this work attempts to offer a more comprehensive and extensive overview of its contributions to the arts, education, music, and drama among other pursuits. Many of the images were displayed at San Diego State University, Special Collections Library from September, 2016 to March 2020, under the title “Revisiting Visionary Utopia: Katherine Tingley’s Lomaland: 1898–1942.”[ii] 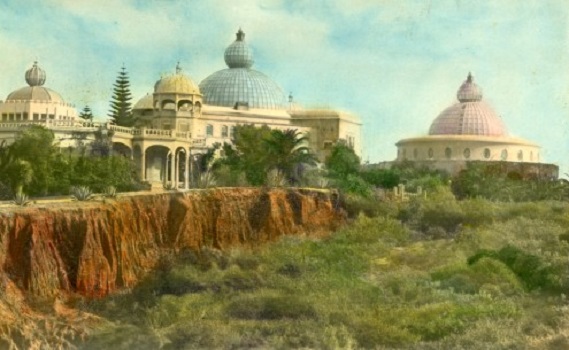 The Raja Yoga Academy and Temple of Peace - Lomaland c1918

The following introduction by co-curators Robert Ray (director of SDSU special collections during the exhibit) and Kenneth Small give an overview:

Katherine Tingley’s Lomaland community flourished in San Diego on Point Loma from its inception in 1897 until 1942. Inspired by the ideals found in late 19th century Theosophy and the New England Transcendentalism of her childhood, Tingley’s charismatic personality and vision drew together participants from more than twenty countries into a vibrant community experiment based on Universalist ethics and ideals. She established the “School of Antiquity” and the “Raja-Yoga School,” embracing creative dramatic productions, music, art, and literature. Reaching its peak of nearly 500 residents by 1920, Lomaland’s drama and creative arts became the cultural and educational hub of a growing San Diego.

“Do well the smallest duty, and when the day is done there will be no regrets, no time wasted, then joy will come. Let us not forget that we are gathered together here at Lomaland for the purpose of serving humanity and bringing to it the knowledge that it needs: that this is not a commercial effort, nor simply an ordinary educational effort but that it is a spiritual effort in the highest sense; and for that reason we must be spiritually endowed with those qualities that make for true nobility.”

Although music and drama were the most central arts at Lomaland, creative artwork found expression in the symbolic themes pervading the architecture of the buildings and grounds. These motifs, derived from world religions, myths, and cultures were filled with sacred meaning from the writings of various Theosophical authors. Lotus design elements pervaded the interior of many buildings, with symbolic motifs derived from ancient Egypt, India, and Greece integrated with ideas of natural harmonics derived from Greek, Pythagorean, and Asian sources. Within the Lomaland community, there were several unusually creative and gifted artists, including Leonard Lester, Marian Plummer Lester, Edith White, Reginald Machell, and Grace Betts. Lomaland Theosophist Maurice Braun, who became the most well-known of the Theosophical artists, resided with his family just a few blocks from Lomaland. Their respective artistic expressions were diverse, ranging from Machell’s “symbolist” style to Braun’s plein air “nature impressionism” to Leonard Lester’s “nature mysticism.” Yet this varied group of Lomaland artists viewed through their understanding of Theosophy, a common internal thread of meaning that unified their unique creative differences into a deeper inner spiritualized view of art.

Reginald Machell, who was mentored by Blavatsky in London and artist resident at the Lomaland community, gives his theosophic view of art:

“Beauty appears to be a quality of Nature, of which man only perceives so much as his mind can assimilate. For beauty does not exist apart from the perceiver. Yet it rather seems to me that beauty is really a state of mind. The senses only register vibrations, which are translated by the mind into colour, form, sound, etc.; and then the mind discovers, by the aid of these qualities, a harmony which it calls beauty, and attributes as a quality to the object of perception, but which really seems to be the result of harmonious relations between mind and object. It would be more true perhaps to say that beauty is in both observer and observed, but not in one apart from the other.”

This cultural view of the Lomaland theosophical community is a highly illustrated 260 page book, with original photographs, art works and images from the Lomaland collection and will be available in a print only limited edition in September 2022.

For information on ordering and book availability contact James Santucci: This email address is being protected from spambots. You need JavaScript enabled to view it.

[i] Editor of The Theosophical History Journal