The Doctrine of Vibration . An Analysis of the Doctrines and Practices of Kashmir Shaivism, Mark S.G. Dyczkowski. The Suny Series I the Shaiva Traditions of Kashmir - Editor: Harvey P. Alper-State University of New York Press. For more info click HERE 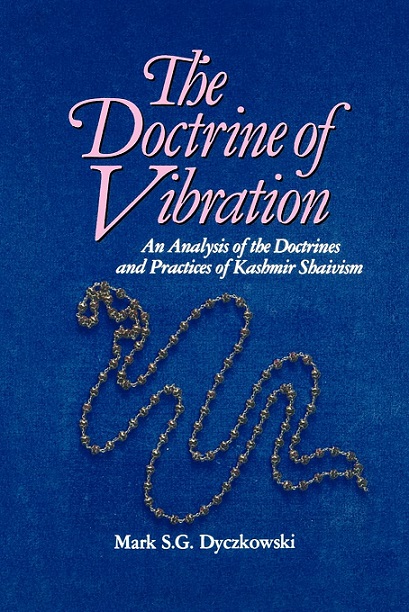 The Doctrine of Vibration is a well written work that provides clarity concerning some of the essential ideas of Kashmir Śhaivism. The author gives an overview of the different Śhaiva groups that held the Śhaiva Tantras, or Āgamas as an authority source. From this source and their teachers, disciples acquired understanding concerning the wisdom of life, and the practices necessary to reach a non-dual union with the state of the Absolute. Having reached that state, words and explanations were no longer necessary.  The authors exposition through the world of Kashmiri Śhaivism begins with a brief review of some of the differences between it and Advaita Vedānta, with an emphasis on integral Monism of Kashmir Śhaivism. A major difference being related to Maya as a power of consciousness, and not illusion. We are then introduced into the Śhaivistic world of consciousness, and its two aspects of Light or Prakāśa, and the creative reflective Awareness, called vimarśa. It is an awareness that is able to be aware, or understand and know itself as such.  From here the nature of Spanda is revealed. It is that inherent subtle vibration that is one with the reality of life itself, and manifest itself so to say as the activity of that “Absolute Consciousness” in of and through all things.

With this background, the author introduces us to the powers of unity. Related to manifestation they are Śiva and Śakti. Yet they are not seen as a typical duality, but as an intimately bound, perhaps androgynous state of power and its possessor.

As the work continues to unfold, we obtain a closer look at Śakti with its “Wheel of Energies” or circles of power. From the state of the absolute void, through that of the energies of the subject, through those of antahkarana or inner organs, then through those of the senses, and finally the objects. There is a correlation of these from the perspective of the supreme, to that of the cosmic. Then, the cosmic energies are revealed and all is presented in a way that works with analogy and correspondence, as well as above and below, regarding an understanding of the relations of all things. We get a glimpse of how the universal is one with the particular.

Continuing, we get a vision of the nature of “The Divine Body and Sacred Circle of the Senses.” For those familiar with sections of cosmogenesis regarding The Secret Doctrine, this chapter both clarifies certain elements, but also fits well into the cosmic scheme for further understanding and application of our theosophic doctrine.

The author completes his work by presenting the various paths and means which the practitioner of Kashmir Śhaivism can use, to reach a self-reflective and conscious realization of the Divine, that gives liberation while living life in the world, yet perhaps being not of the world.

This work is clear, informative, metaphysical, occult in its own way, yet practical in its understanding of the Kashmir Śhaivistic knowledge and path. It’s reading and study will be rewarding.

This edition of Notable Books was compiled by Eugene Jennings