Anecdotes about conductors – One 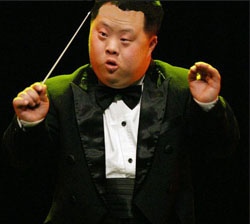 A community orchestra was plagued by attendance problems. Several musicians were absent at each rehearsal. As a matter of fact, every player in the orchestra had missed several rehearsals, except for one very faithful oboe player. Finally, as the dress rehearsal drew to a close, the conductor took a moment to thank the oboist for her faithful attendance. She, of course, humbly responded “It's the least I could do, since I won't be at the performance.”