Anecdotes about Pablo Picasso – One 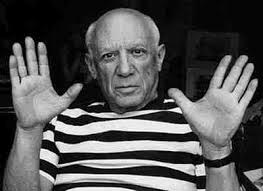 A poor artist owned a supposed Picasso. He sent it via a friend for the master to authenticate it. Picasso: “It's false.”

From a different source the friend brought another and another Picasso-painting. Each time Picasso disowned them. Yet the third time the man said, “But I saw you paint this one with my own eyes.”

“I can paint false Picassos as well as anyone,” retorted Picasso. Then he bought the first painting for a sum four times as high as the owner had originally hoped it would fetch.

We have 921 guests and no members online