What are Words Worth? 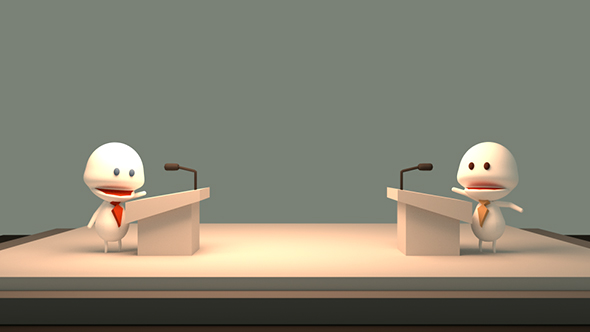 Let’s face it, no matter what some might say, in many parts of the world political debates have entirely deteriorated. They have turned like going into combat – the gladiators are ready to fight, looking for any and every way to find flaws in the opponent’s argument, while minds are not open to the opponent’s beliefs. This type of debate, whereby the main objective is to destroy the opponent’s character and status. leads to mud throwing, insults and under the belt, personal attacks. Instead of elucidating debaters’ standpoint through utilizing rhetorical eloquence, the level of the deliberations has sunk so miserably low that watching such a confrontation has become the worst thinkable nightmare.

Conclusion: nowadays most political debates are unbrotherly and absolutely useless.

When conversations are considered to be dialogues, understanding is a common goal between everyone involved. Participants take the challenge of the conversation as a learning opportunity. They work together to find strengths in each other’s views and work toward finding solutions to an issue. In this case communicators are open-minded in this type of conversation, and look for the best options that will benefit everyone involved. Instead of just one party feeling like a victor, everyone walks away satisfied with the outcome of the conversation. 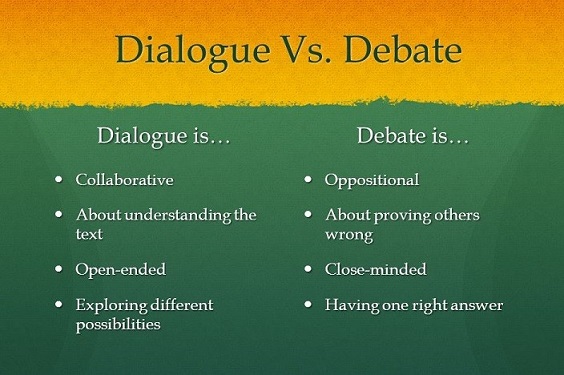 Conclusion: a dialogue is Brotherhood in progress.

To express opinions with the aim to do good and when the intentions are pure, and what is said is true, is the path all women and men should follow. Remember: words are thoughts with sound. Words have energy and power with the ability to help, to heal, to love, but also to hinder, to hurt, to harm and to humiliate

Empty words, as we hear them constantly in the hollowed out political debates cause painful dissonances on the astral plane and are out of tune with the universe, resulting in the destruction and conflict.

WHAT ARE WORDS WORTH?

Since this brief write up was published on Theosophy Forward, more thoughts came to my mind.

Nowadays it is hard, actually quite impossible, not to get involved with all that is politically going on in the world around us. In many countries those active on the political arenas are suffering from a pandemic-like disease caused by fargoing creed and selfishness. As Theosophists, seekers for Truth, we know that discord through verbal abuse, as this often occurs in current debates. creates a disturbing unbalance on the Astral plane.

Let us define what VERBAL ABUSE is:

Verbal abuse (also verbal attack or verbal assault) is the act of forcefully criticizing, insulting, or denouncing another person.[1] Characterized by underlying anger and hostility, it is a destructive form of communication intended to harm the self-concept of the other person and produce negative emotions. Verbal abuse is a maladaptive mechanism that anyone can display occasionally, such as during times of high stress or physical discomfort. For some people, it is a pattern of behaviors used intentionally to control or manipulate others or to get revenge.

If a debate is meant to draw contrasts between the opinions of two or more speakers, and if indeed it is about the sincere conviction the debaters have, whereby at all times mutual respect for an “opponent” is demonstrated, there could be a path forward, but in all honesty, where do we still see those type of debates?

Opposition research is undertaken in order to fully demolish an opponent’s image, personality and complete being, whereby the honest truth, the reality, is simply shuffled under a thick carpet.

Someone once said: “When they go low, we go high.” I fully underscore the intention, but in a confrontational setting as described above, going high would need to be explored.

As in music, or better even, as with musical instruments, people, in order to speak with one another need to be tuned. Being in tune does not automatically mean that there is an agreement. In tune means that there is to be willingness to listen to each other's point view, and that there is comprehension about the energies words, as I wrote earlier, thoughts with sound, cause on our plane.

Just imagine two debaters. One of them is operating influenced by egotism, narcissism and voracity thus representing a dark force, fully determined to obliterate everything his opponent is and stands for. The other one, number 2, is sincere and at least attempts to be fair, truthful and transparent. If these are the facts, the debate itself has already hopelessly failed beforehand. The number 2 debater should not be pulled down entering the "lower energy" fields, because it is a trap, a zone where he or she cannot succeed.

Conclusion: If someone goes low, the only way to go high is TOTAL SILENCE.