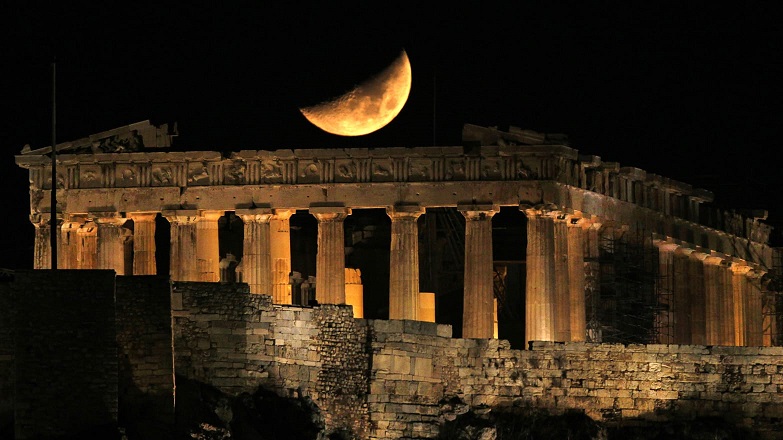 Was Stonehenge built for profit? Was the Parthenon meant to yield a reliable income stream for a pension fund? Was Machu Picchu part of a wider commercial enterprise? Was the Great Pyramid part of an international property portfolio? The answers are respectively no, no, no and no.

These mighty structures were part of something which has almost entirely vanished from human endeavour – the construction of sacred buildings. The world doesn’t do sacred any more and hasn’t for quite some time. With exception of a few new religious buildings of one kind or another, the remaining ninety-nine per cent of new structures are exclusively about money. (And it is possibly questionable whether even some of these religious structures are truly sacred.)

Materialism has eaten away the sacred until there is nothing left. The universal mantram from Algeria to Zambia is ‘If it doesn’t make a profit, don’t build it.’ And to hell with what it looks like.

In the distant past most buildings were sacred. Even individuals’ homes. In all cultures many natural locations such as mountains, glens, caves, forests and rivers were all regarded as sacred places and revered as such. We still visit these places often in such large numbers that they have extinguished all natural energies which would have made these places special in the first place.

Many fine structures were built using strict proportion and sacred geometry such as phi Φ, the golden section of the Pythagorean tradition. Simply put, this means dividing a line in perfect proportion so that one part is 1.6180339 and the other 0.6180339. This is widely used in the modern world and is still reflected in the size of such mundane objects as credit cards and A4 sheets of paper. Admittedly, sacred geography can be a headache for the mathematically challenged but its effects are profound.

Proportion – and the underlying mathematical secrets of the universe – are vital in ensuring harmonious structures. The ancients knew this. We have forgotten it. Sacred architecture has to be re-discovered and revived.

However, under present conditions this is about as likely as the world’s politicians suddenly taking up honesty as a vocation.

Architecture is one of the most critical factors in influencing and sustaining well-being – or its opposite. Le Corbusier’s brutal and soul-less cities in the sky have triumphed in every land – with consequent catastrophic results. These steel and glass mega-structures are the most effective means yet devised for divorcing humans completely from their natural environment. They make us feel small and insignificant. Is this what they are meant to do?

Architecture needs to reflect deeper truths. It needs to nurture. It should start with human need not the bottom line of a balance sheet.

Many of the world’s cities across all continents have become open wounds, cauldrons of conflict and sink-holes of depravity fissured by violence and alienation. Few cities can currently be described as high-points of civilization. A great many display all the signs of a decaying and collapsing civilization – not one of harmony, vigour or cultural excellence.

For more than two centuries most cities have largely become over-heated gulags for the exploitative economics and social control required by global capitalism and its driving dynamic of over-consumption. Over recent decades the majority of cities have witnessed a visible decline in the well-being and confidence of their populations despite continuous physical, economic and sometimes cultural regeneration measures. City planners always talk about physical regeneration of buildings not the regeneration of the local population. People always come second.

Cities need to be transformed from homogenised monoliths and reverse-engineered into the separate, individualised but connected villages many of them once were. Preserving a sense of individual community and pride of place is massively important. And yet this is diametrically opposed to the way cities actually work.

Why are cities often such lonely places? Why do many people not know those the neighbours they have lived next to for years? Why do cities engender such fear and suspicion? Are they natural and suitable environments for human beings to live in? Have they become too big? Why do people across the world avoid eye contact on public transportation systems in cities? Why do people in cities feel morally, economically and often politically superior to those who live in towns and villages?

In every country of the world without exception we have produced some truly horrible and disease-inducing eyesores – especially over the past century. Buildings make us ill. Scientists discovered ‘sick building syndrome’ decades ago but eye-jarring structures continue to erupt from the earth. Virtually every modern building is cynical in its execution and intention. Profit always prevails over aesthetics. Imagination is usually entirely absent.

We should remember that every building is an individual just the same as we are. Although connected to other buildings and the wider environment, buildings are not clones. And neither are we.

This is why we need to re-discover the secrets of constructing harmonious buildings with an underlying sacred proportion and purpose. The re-discovery and re-implementation of sacred geometry should make our architecture divine – just the way that we are (although most do not know it).

Place is also paramount as the respected feng shui tradition of China proved centuries ago by locating buildings in the correct places and thereby integrating them into the landscape without causing disharmony. They knew that a wrongly-designed building in the wrong place would not only never work but would severely hamper all other activity in the vicinity. It was one of the reasons behind the Boxer Rebellion against the British in the early twentieth-century.

We could have created a paradise on earth and we still could. Instead we slavishly worship the ugliness and hollow utility of what we have created. We will continue to do this until we understand that we ourselves are sacred spiritual beings and that we need homes and other buildings to reflect this. And only with this realisation will emerge an economic system which allows buildings to have a sacred as well as a practical design and purpose.

In the shorter term we must become more critical of the ugliness imposed on us in the name of necessity. We are finally realising that it is wrong to pollute our atmosphere with car emissions and greenhouse gases and our environments with plastic and toxic waste.

Now is the time to realise that it is equally wrong to visually pollute our environment with any ugly structure be it a power station, factory, office or one-person dwelling. Buildings not only need to be functional and sustainably constructed but also beautiful – and sacred.

We have 593 guests and no members online