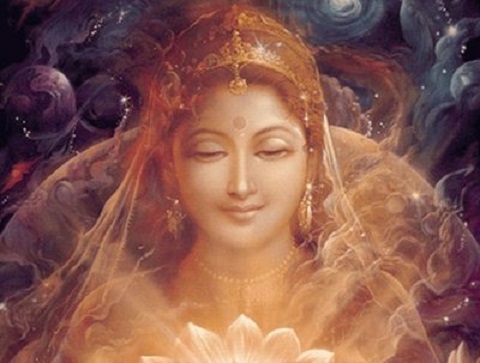 The fact is, our life in this physical realm begins from a being in the form of a woman. It is the first introduction we have to life and often if it does not go well, it can create a pattern of difficult relationships either with mother figures or women in general. This seems like an overreaching statement, but in our daily life, we live by name and form. Everything we come into contact with has a form and with that form come thoughts about what that form is, how it is labeled in our mind, and what that label means to us emotionally. With that emotion comes past experiences, viewed in a positive or negative light. At the root of this, is the woman who gave us life. Given this, is it possible to go beyond the name and form of the word Mother in order to explore this archetype from a deeper or more spiritual aspect?

The Mother archetype is often depicted as having such virtues as compassion, nurturing, kindness, protection, and sacrifice. Various cultures revere these qualities in a person of a community and many religions have a female figure (or several) who is/are considered the embodiment of such attributes; such beings are worshipped and supplicated to in times of need. We see this with the Virgin Mary, Quan Yin or Tara, and Durga, just to name a few. When viewing ancient civilizations, cave drawings and figurines show the pregnant female form was honored or worshipped because women’s ability to give birth meant survival for the community. And in some communities, women have found solace in the belief that a mothering deity will protect and guide them as they themselves become mothers.

In ancient thought, the power to create is considered a feminine trait. The Sanskrit root “śakt” or “shak” means “potential” or “to be able” while “śakti” or “shakti” gives it the feminine noun form according to New World Encyclopedia. In Hindu thought, shakti is the creative force behind manifestation; nothing can manifest without it. It is considered the cosmic force that surrounds us, constantly creating, maintaining, and transforming. When looked at from this perspective, it is understandable how this force, in reality without any gender, was embodied as a woman. The womb of the woman is where life in the manifested world is created, maintained, and transformed. Of course, when we step back from this perspective for a wider view, potential is in every living thing, it is just a matter of whether the right forces come together to help that potential manifest. Shakti surrounds everything seen and unseen. Shakti is what moves things forward. Therefore, death is not the end of life, but just transformation of form. And karma, which means “action,” seems take on a different meaning. There is always potential in action, it is just a matter as to whether all the right forces come together for that action to manifest. In the material world, our awareness and discipline determine the outcome of an action. Even if we do not act, we are still acting. (Sadly, this is all too vast a topic to explore here.)

In Theosophical writings, H.P. Blavatsky (HPB) mentions in the footnotes of the Voice of the Silence that “The inner chamber of the Heart, called in Sanskrit Brahma poori. The ‘fiery power’ is Kundalini.” She continues, “The ‘Power’ and the ‘World-mother’ are names given to Kundalini—one of the mystic ‘Yogi powers.’ It is Buddhi considered as an active instead of a passive principle…” This statement when deconstructed gives us a clearer idea of the power behind the Mother archetype.

HPB mentions Brahmapuri, the home or abode of Brahma, to be the inner chamber of the Heart, the place where purity, love, harmony and all that progress relies upon, lives. But this abode is for the World Mother, that force or power that continues life in all realms, also known as Shakti. (It is due to Shakti that Brahma, Vishu, and Shiva even exist!) In the human form, we call it kundalini, but this power is everywhere waiting to be discovered. It is believed that when the kundalini is awakened in the human body, we resonate with the life force that surrounds us. Bliss envelopes us and we are no longer estranged from the Mother. We live in divine love.

This may help explain the desire some people have to connect with this Divine principle through the practice of kundalini yoga or other methods. However, these practices can be dangerous to an extent if not done in the right light. The seeker should be aware of shortcut methods to enlightenment. Sadly, the new age movement of today focuses too much on surface-level spirituality and not enough on the work needed to create a solid foundation for the mind/body/spirit component.

In reality, the energy of the Mother archetype can only be obtained through a complete letting go and a complete lack of ego. A surrender of our would/should/could talk, of right and wrong, of categories and logicality, and of our shame/blame beliefs, is necessary. It is easy to believe we are beyond this, but like the coiled serpent under the rock, such beliefs rise to the surface when we haven’t dealt with them. A lovely exercise to help the wounded child within ourselves is to call on the Mother to help soothe these wounds. The Mother does not have to have a form. It is more about envisioning the energy and using the energy to heal oneself. The more we heal, the more we are able to connect to that creative force.

To reconnect with the Mother of All that Is, we must become like vulnerable small children again and allow ourselves to just Be. It is a process where our logical mind is turned off, our heart and ears are open. (As mentioned, this can be trying for anyone who has been wounded by a parent.) Nature follows no clock. With a steady practice of quieting ourselves through nature, we may find we become like small children—smelling flowers in a garden, watching the magic of a butterfly or being fascinated by the vastness of a full moon. It is in this state that we are comforted by “Nature’s wordless voice,” the Divine Mother.

We have 157 guests and no members online