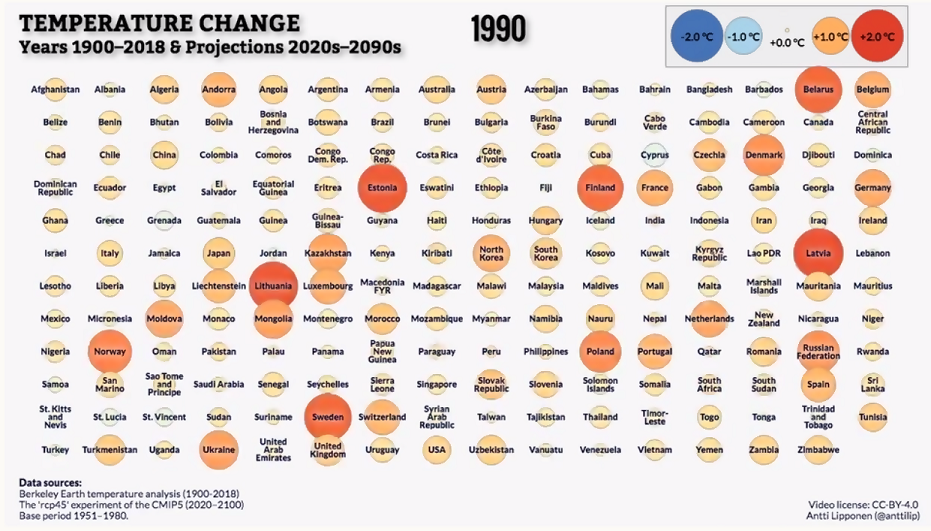 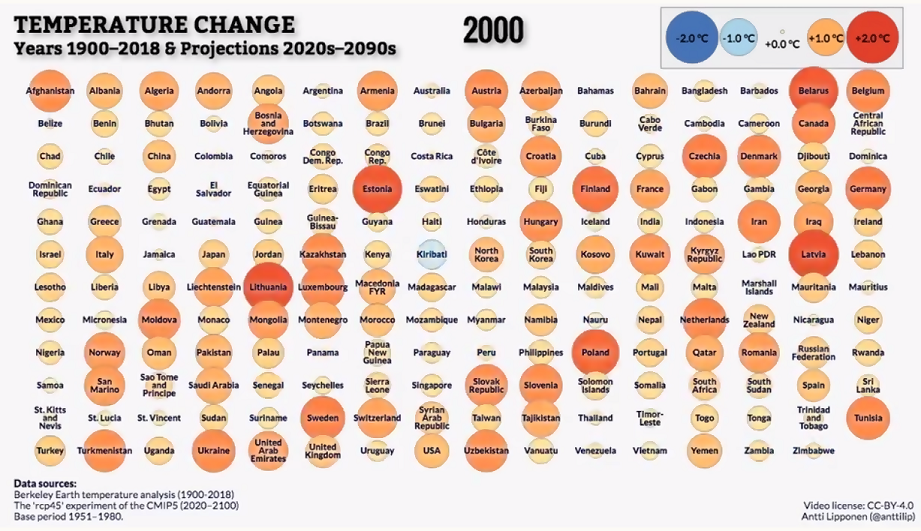 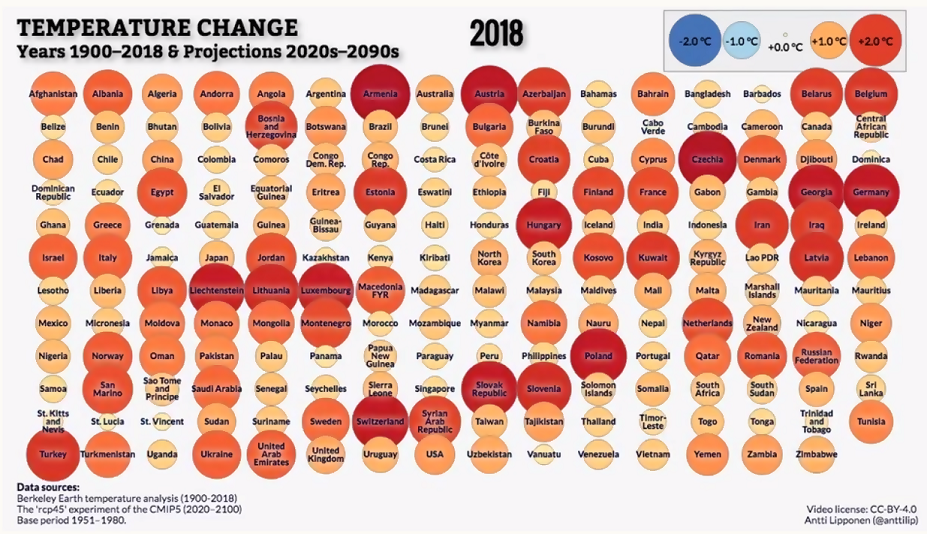 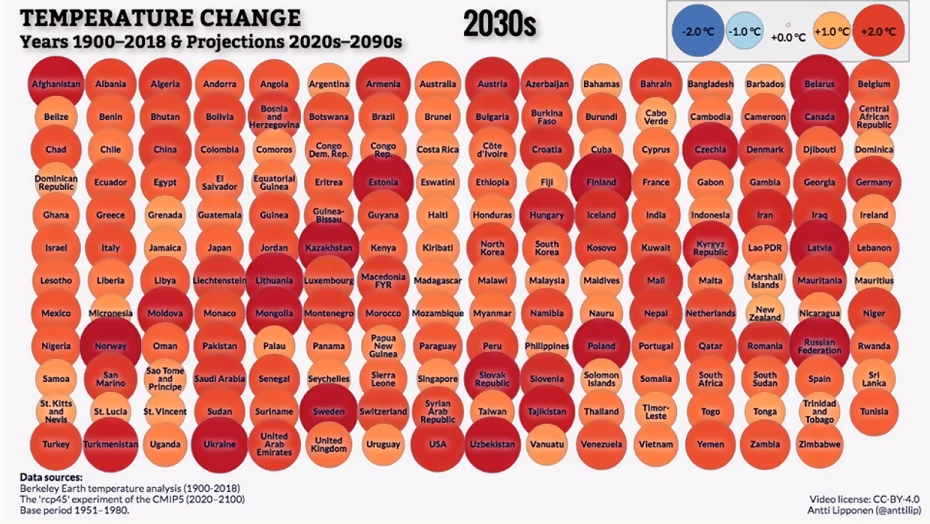 The European Environment Agency (EEA) writes about the climate in Europe in its four-yearly report (2). "More heat waves and problems due to warm nights in the city, not only around the Mediterranean Sea but also in and around the Netherlands and other Northern European cities."

From the past decades it can be concluded that global warming leads to increased risks of heat waves and dry episodes. In addition, the temperature on the hottest days and nights in the scenarios also rises more than the average warming. Because the temperature in cities is often several degrees higher than in rural areas (also called Urban Heat Island), the impact of these hot and dry days in cities is much greater. It is assumed that this effect means an extra 4 degrees Celsius. Measurements taken in Rotterdam during the heat wave in 2015 (3) showed that the temperatures measured in the city were up to 9.9 degrees higher than the surrounding green areas. 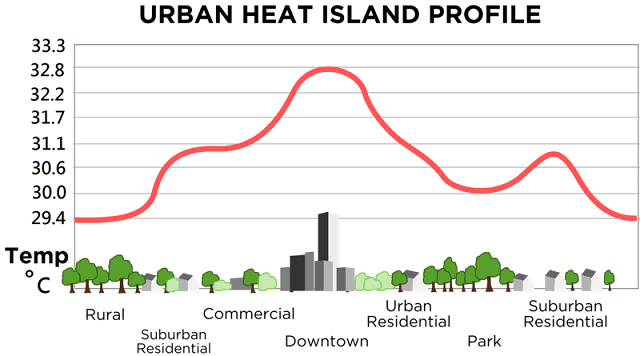 The south of Europe has in recent years increasingly had to deal with large wildfires. The rain season is mostly in winter there. So, if there is little rainfall, nature dries out due to the warming Earth in the course of spring. This change in climate around the Mediterranean Sea leads to a further drying out and an increasing risk of major forest fires. That was painfully clear again during the summer of 2017. Vast forest fires in southern Europe, especially in France, Spain, Portugal, Montenegro and Greece. In 2019, we also see an increase in forest fires in unexpected places in the northern hemisphere. Siberia, Canada and Alaska are areas where forest fires occur regularly. Forest fires cause ecological and economic damage every year in an area the size of the European Union, which is not small.

Fortunately, in southern Europe and even worldwide, the total number of forest and heathland fires and the area of ​​the burnt area has decreased in recent decades, although there are major regional differences. How can this be explained?

By giving more attention to the prevention of natural fires and increasing knowledge about how these natural fires originate and how to control or prevent them, we learn to prepare for this natural phenomenon. Partly thanks to satellite observations, we can respond faster. But also because nomads travel less and settle more often in permanent places, less nature is burned down. 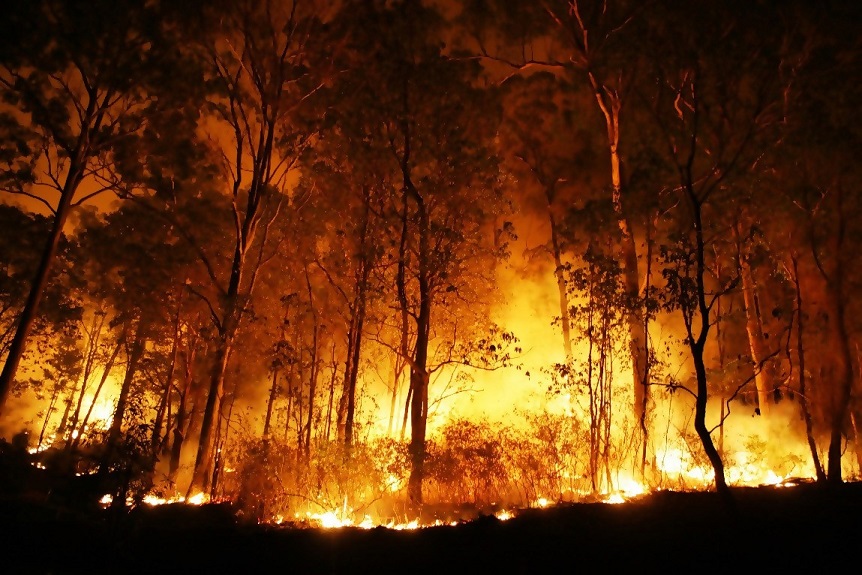 Forest fires in southern Europe and also in Siberia and Canada cause great damage and even deaths (photo: Peter J. Wilson on Shutterstock)

Due to the warming Earth and especially the warmer seawater, which is the engine of the showers, we more often face more extreme weather. Meteorologist Jennifer Faber from Buienradar (4) says: "If global warming continues, weather events will become more and more extreme. Not only for Europe but also for the Netherlands. We must bear in mind that we will get heavier or more showers."

In recent years, we have noticed that showers can be more intense, more precipitation in a shorter time, often locally, accompanied by strong winds and gusts of wind. Hailstorms can hit suddenly, with large hailstones. In particular, heavy rainfall within a short time is increasing with around 12 percent per degree of warming and that is already noticeable.

Due to the increasing rainfall and urbanisation with associated canalisation of rivers and the pavement of surfaces, rivers have had a harder time draining all the water properly. For the Netherlands as a delta country, our large rivers, such as the Rhine, have to drain more rainwater in the winter, while less melt water in the summer due to further evaporation. The expectation is that the Rhine, now a combined rain and melt water river, will become more like a rain river. A rain river has high drainage in the winter and low drainage in the summer. The Maas has always been a rain river. For both rivers, high water levels are not only more frequent, but they also have higher water levels. The Netherlands has already prepared for this situation by creating extra space in the river floodplains. Many other countries have not yet taken these precautions. 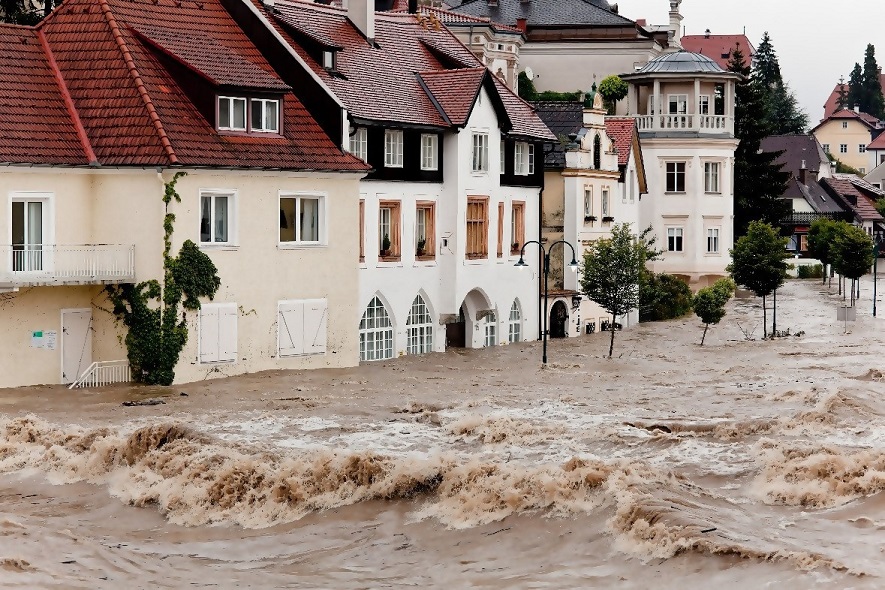 A flooded river due to heavy rainfall (source: Lisa S. via Shutterstock)

There is much talk about a sea level rise. But what exactly does that mean?

An absolute rise in sea level is caused by changes in the total amount of water in the oceans (for example due to melting of glaciers or land ice) and in the change in volume due to temperature changes. Hot water expands, cold water shrinks. The largest contribution is currently made by the increase in volume due to the temperature rise of the ocean water.

Sea level off the Dutch coast has risen steadily in 125 years by around 23 cm, or a change of 1.9 mm per year. This corresponds broadly to the worldwide rise in sea level of around 22 cm over the same period. Since 1993, the global sea level rise has been accelerating. 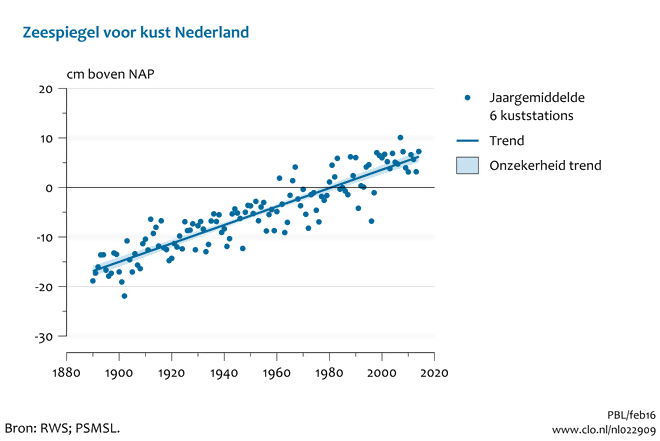 Our part of Europe is also sometimes drier than normal, although that is not yet certainly due to climate change. We do not see any increase in dry periods compared to the past, but we do see that the drought can be more extreme. Droughts in the Netherlands also pose a risk of forest fires, although their scale and intensity will not be comparable to the scenes that occur every year in southern Europe. In our country, however, there are other problems in the event of persistent drought. Such as the sinking of old dikes, with the risk of flooding. Ultimately, salinization can occur, damage to crops and, in the longer term, a threat to the drinking water and food supplies.

Globally, we see an increase in drought in areas such as the Middle East, India, Central Africa (Sahel zone) and Southern Africa. With failed harvests and a possible doubling of the number of people with hunger as a result.

Climate change is of course never the only cause of a war, but it can contribute to its origin. The war in Syria was partly caused by the drought in the northeast of the country. Leo Meyer, climate consultant and former climate researcher at the Netherlands Environmental Assessment Agency (PBL), talks about this in The State of Climate 2015 (5): "It is difficult to prove that a climate event has contributed to the emergence of conflicts, and it is even more difficult to attribute a regional climate event to global warming."

But in the case of Syria, scientists succeeded quite well. The area is generally fairly fertile and is inhabited by many farmers who farm there. From 2007 to 2010, however, three dry years followed each other, causing harvests to fail. The scientists calculated that the chance that those three dry years fall within the natural variation of the climate was negligibly small. "It must have been climate change," says Meyer. The drought caused farmers to leave their land and move to the city. Some cities gained up to 50 percent more residents. "If you arrange it properly, you can manage such an influx," says Meyer. “But Assad did nothing at all. As a result, dissatisfaction grew, resulting in conflicts.” It makes it clear once again that there is never one cause behind a war, but that all kinds of forces work together.

Of course, Syria is not the only place where we are dealing with climate refugees. According to the United Nations (UN), there are currently 140 million people displaced by climate change. Many of them are Africans, but also people 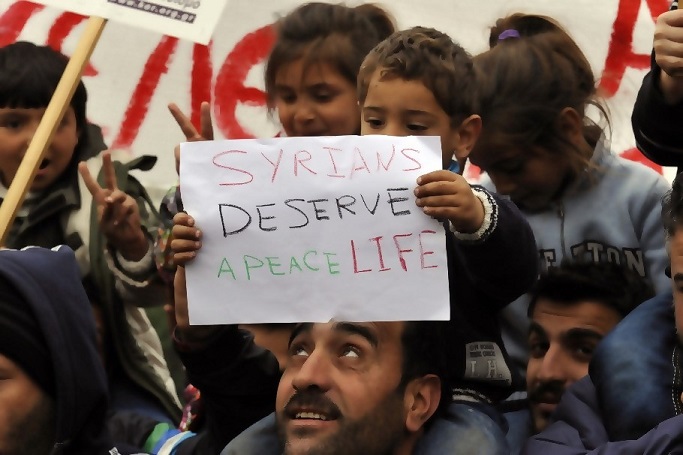 from India and Bangladesh.