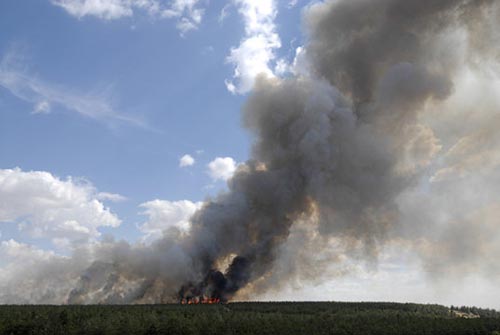 Without humans in the region to clear trees for building materials, heating, cooking, and agriculture, the forest began to reclaim that territory, providing, literally, more fuel for fires

There is little dispute that in the wake of European colonists' arrival in the New World, Native American populations were decimated by disease and conflict. But when it comes to the timing, magnitude, and effects of this depopulation – it depends on who you ask.

Many scholars claim that disease struck the native population shortly after their first contact with Europeans, and spread with such ferocity that it left tell-tale fingerprints on the global climate. Others, however, argue that – though still devastating – the process was far more gradual, and took place over many years.

A new Harvard study, however, suggests both theories are wrong.

Led by Matt Liebmann, the John and Ruth Hazel Associate Professor of the Social Sciences in the Department of Anthropology, a team of researchers was able to show that, in what is now northern New Mexico, disease didn't break out until nearly a century after the first European contact with Native Americans, coinciding with the establishment of mission churches.

But when it did finally strike, the study shows, the effects of disease were devastating. In just 60 years, native populations dropped from approximately 6,500 to fewer than 900 among the 18 villages they investigated. The study is described in a Jan. 25, 2016 paper published in the Proceedings of the National Academy of Sciences.

In addition to Liebmann, the study was co-authored by Joshua Farella and Thomas Swetnam from the University of Arizona and Christopher Roos from Southern Methodist University.

“In the Southwest, first contact between native people and Europeans occurred in 1539,” Liebmann said. “We found that disease didn't really start to take effect until after 1620, but we then see a very rapid depopulation from 1620 to 1680.” (The death rate) was staggeringly high – about 87 percent of the Native population died in that short period.

“Think about what that would mean if you have a room full of people and nine out of 10 die,” he continued. “Think of what that means for their social structure, if they're losing the people who know the traditional medicine, their social and religious leaders, think of the huge impact it would have on their culture and history.”

The fallout from that depopulation, however, wasn't merely cultural.

“Forest fires also take off during this period,” Liebmann said. “When people are living in these villages, they need timber for their roofs, and for heating and cooking. In addition, they're clearing the land for farming, so trees weren't growing there when these archaeological sites were inhabited. But as people died off, the forests started re-growing and we start to see more forest fires.”

That finding, he said, also links the study with ongoing debates about whether the world has entered a new geological era – dubbed the Anthropocene – marked by the fact that humans have affected the climate on a global scale.

Though there is still wide debate about when this new epoch started, a number of researchers have pointed to 1610, when – ice core records show –\ global CO2 levels dropped dramatically.

“One of the ‘Early Anthropocene’ theories suggests that because Native Americans were being removed from the landscape on a massive scale, especially in the Amazon, they were no longer burning the forest for agriculture, and as the forest re-grew it sequestered carbon,” Liebmann said. The argument hinges on the notion that the depopulation of the Americas was so extreme that it left its mark on the atmosphere and climate at global scales.

“Our data speaks to a period a little bit later than the dates of low CO2 from the ice cores, but depopulation in the Southwest could have intensified that dip,” he added. “The important thing, from my perspective, is that the Southwest was one of the earliest points of contact between Europeans and Native Americans in what later became the U.S., and it hadn't yet experienced a catastrophic depopulation by 1610, so it's hard to argue for it happening anywhere in the rest of North America at that early date.”

Mapping nearly 20 Native American villages, however, is no easy feat – many researchers might spend years examining a single site. To pull it off, Liebmann and colleagues turned to a technology known as LiDAR, which uses lasers to penetrate the dense forest cover and create a map of the region that, in some cases, is accurate down to the centimeter.

“I thought my career would be standing on these sites with a (surveying tool called a) total station,” Liebmann said. “I've mapped a couple of archaeological sites like this before, and it can take years, but with LiDAR I have the ability to calculate the architecture of 18 villages in an instant. This new technology is what made this study possible.”

Armed with that data, Harvard Anthropology graduate student Adam Stack and undergraduate student Sarah Martini were able to calculate the volume of each building and develop an equation to estimate how many people lived in the area.

Dating the sites – and in particular when villages may have been abandoned as the population dwindled – is far trickier.

“Usually, we use tree rings to date architecture in the Southwest,” Liebmann said. “If someone cuts down a tree to use as a roof beam, archaeologists can look at the tree rings to date it. But for this project we didn't excavate the sites, so we couldn't recover the roof beams. Instead, the dendrochronologists on our team looked at the inner rings of trees that are still growing on these sites to establish when they germinated. They found that tree growth took off between 1630 and 1650. When we get a cluster of dates in the same 20-year period, that tells us that something happened at these villages to start these trees growing there.”

What that something was, Liebmann said, was the removal of the native population from the landscape. Without humans in the region to clear trees for building materials, heating, cooking, and agriculture, the forest began to reclaim that territory, providing, literally, more fuel for fires.

“When we looked at the patterns of fires in the tree rings, we could see that up until about 1620, fires were small and sporadic,” Liebmann said. “Native American fields were acting as literal fire breaks. But as the forest started re-growing, much more widespread fires occurred. That continued until almost exactly 1900, when a combination of increased livestock grazing and a change in federal forest management policies began to suppress all fires.”

Ultimately, Liebmann said, the study shows that understanding how and when depopulation happened, and the ecological fallout from it, is far more complex than researchers have previously thought.

“Our findings support the notion that there was a massive depopulation, but it's not quite as simple as many people have thought before,” Liebmann said. “This research also speaks to...current debates in the American West about how we should manage fire risk. What our study shows is that forest fires were being managed by Native people living in dense concentrations on the landscape – not unlike the situation today in many parts of the Southwest. So there may be some lessons here for contemporary fire management.”