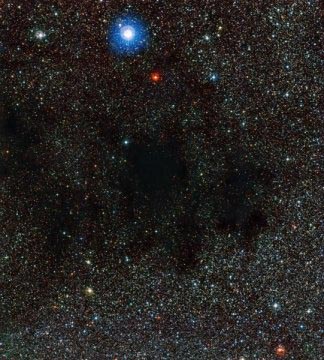 The Coalsack Nebula is located about 600 light-years away in the constellation of Crux. This huge, dusky object forms a conspicuous silhouette against the bright, starry band of the Milky Way and for this reason the nebula has been known to people in the southern hemisphere for as long as our species has existed.

The Spanish explorer Vicente Yáñez Pinzón first reported the existence of the Coalsack Nebula to Europe in 1499. The Coalsack later garnered the nickname of the Black Magellanic Cloud, a play on its dark appearance compared to the bright glow of the two Magellanic Clouds, which are in fact satellite galaxies of the Milky Way. These two bright galaxies are clearly visible in the southern sky and came to the attention of Europeans during Ferdinand Magellan's explorations in the 16th century. However, the Coalsack is not a galaxy. Like other dark nebulae, it is actually an interstellar cloud of dust so thick that it prevents most of the background starlight from reaching observers.

A significant number of the dust particles in dark nebulae have coats of frozen water, nitrogen, carbon monoxide and other simple organic molecules. The resulting grains largely prevent visible light from passing through the cosmic cloud. To get a sense of how truly dark the Coalsack is, back in 1970, the Finnish astronomer Kalevi Mattila published a study estimating that the Coalsack has only about 10 percent of the brightness of the encompassing Milky Way. A little bit of background starlight, however, still manages to get through the Coalsack, as is evident in the new ESO image and in other observations made by modern telescopes.

The little light that does make it through the nebula does not come out the other side unchanged. The light we see in this image looks redder than it ordinarily would. This is because the dust in dark nebulae absorbs and scatters blue light from stars more than red light, tinting the stars several shades more crimson than they would otherwise be.

Millions of years in the future the Coalsack's dark days will come to an end. Thick interstellar clouds like the Coalsack contain lots of dust and gas – the fuel for new stars. As the stray material in the Coalsack coalesces under the mutual attraction of gravity, stars will eventually light up, and the coal “nuggets” in the Coalsack will “combust”, almost as if touched by a flame.

We have 916 guests and no members online