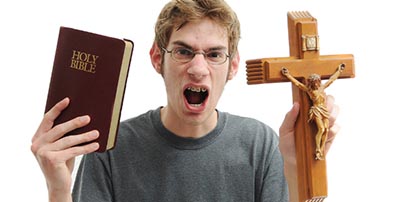 Individuals who blame karma for their poor health have more pain and worse physical and mental health, according to a new study from University of Missouri researchers. Targeted interventions to counteract negative spiritual beliefs could help some individuals decrease pain and improve their overall health, the researchers said.

“In general, the more religious or spiritual you are, the healthier you are, which makes sense,” said Brick Johnstone, a neuropsychologist and professor of health psychology in the MU School of Health Professions. “

“But for some individuals, even if they have even the smallest degree of negative spirituality – l basically, when individuals believe they're ill because they've done something wrong and God is punishing them – their health is worse.”

“Previous research has shown that about 10 percent of people have negative spiritual beliefs; for example, believing that if they don't do something right, God won't love them,” Johnstone said. “That's a negative aspect of religion when people believe, 'God is not supportive of me. What kind of hope do I have?' However, when people firmly believe God loves and forgives them despite their shortcomings, they had significantly better mental health.”

The study, “Relationships Between Negative Spiritual Beliefs and Health Outcomes for Individuals With Heterogeneous Medical Conditions,” was published in the Journal of Spirituality in Mental Health.