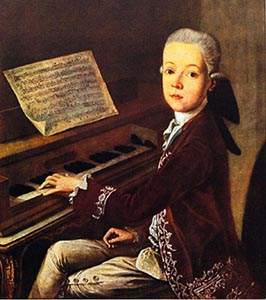 Mozart as a child

Part of the service used in the Pope's chapel at Rome is sacredly guarded and kept with great care in the archives of the chapel. Any singer found tampering with this “Miserere” of Allegri, or giving a note of it to an outsider, would be visited by excommunication. Only three copies of this service have ever been sent out. One was for the Emperor Leopold, another to the King of Portugal, and the third to the celebrated musician, Padre Martini.

But there was one copy that was made without the Pope's orders, and not by a member of the choir either. When Mozart was taken to Rome in his youth, by his father, he went to the service at St. Peter's and heard the service in all its impressiveness. Mozart, senior, could hardly arouse the lad from his fascination with the music, when the time came to leave the cathedral. That night after they had retired and the father slept, the boy stealthily arose and by the bright light of the Italian moon, wrote out the whole of that sacredly guarded “Miserere” The Pope's locks, bars, and excommunications gave no safety against a memory like Mozart's.