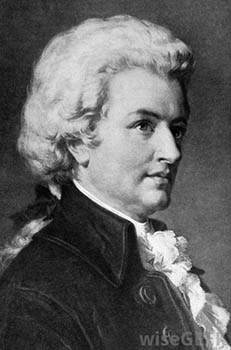 The bodily frame of Mozart was tender and exquisitely sensible; ill health soon overtook him, and brought with it a melancholy approaching to despondency. A very short time before his death, which took place when he was only thirty-six, he composed that celebrated requiem, which, by an extraordinary presentiment of his approaching dissolution, he considered as written for his own funeral.

One day, when he was plunged in a profound reverie, he heard a carriage stop at his door. A stranger was announced, who requested to speak with him. A person was introduced, handsomely dressed, of dignified and impressive manners. “I have been commissioned, sir, by a man of considerable importance, to call upon you.”—“Who is he?” interrupted Mozart. “He does not wish to be known.”— “Well, what does he want?” —“He has just lost a person whom he tenderly loved, and whose memory will be eternally dear to him. He is desirous of annually commemorating this mournful event by a solemn service, for which he requests you to compose a requiem.”—Mozart was forcibly struck by this discourse, by the grave manner in which it was uttered, and by the air of mystery in which the whole was involved. He engaged to write the requiem. The stranger continued, “Employ all your genius on this work; it is destined for a connoisseur.”—”So much the better.”— “What time do you require?”—“A month.”— “Very well; in a month's time I shall return—what price do you set on your work?”— “A hundred ducats.” The stranger counted them on the table, and disappeared.

Mozart remained lost in thought for some time: he then suddenly called for pen, ink, and paper, and, in spite of his wife's entreaties, began to write. This rage for composition continued several days; he wrote day and night, with an ardour which seemed continually to increase; but his constitution, already in a state of great debility, was unable to support this enthusiasm; one morning he fell senseless, and was obliged to suspend his work. Two or three days after, when his wife sought to divert his mind from the gloomy presages which occupied it, he said to her abruptly, “It is certain that I ain writing this requiem for myself; it will serve for my funeral service.” Nothing could remove this impression from his mind.

As he went on, he felt his strength diminish from day to day, and the score advancing slowly. The month which he had fixed being expired, the stranger again made his appearance. “I have found it impossible,” said Mozart, “to keep my word.” “Do not give yourself any uneasiness,” replied the stranger; “what further time do you require?”— “Another month; the work has interested me more than I expected, and I have extended it much beyond what I at first designed.” — “In that case, it is but just to increase the premium; here are fifty ducats more.”—“Sir,” said Mozart, with increasing astonishment, “who then are you?”—“That is nothing to the purpose; in a month's time I shall return.”

Mozart immediately called one of his servants, and ordered him to follow this extraordinary personage, and find out who he was; but the man failed from want of skill, and returned without being able to trace him.

Poor Mozart was then persuaded that he was no ordinary being; that he had a connection with the other world, and was sent to announce to him his approaching end. He applied himself with the more ardour to his requiem, which he regarded as the most durable monument of his genius. While thus employed, he was seized with the most alarming fainting fits; but the work was at length completed before the expiration of the month. At the time appointed, the stranger returned, but Mozart was no more. His career was as brilliant as it was short. He died before he had completed his thirty-sixth year; but in this short space of time he had acquired a name which will never perish, so long as feeling hearts are to be found.

We have 219 guests and no members online