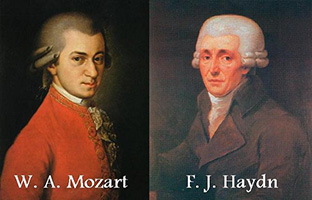 Besides having a very cool name, Mozart was one of the most influential and enduring classical composer who lived a short life and died at the age of 35. He composed over 600 compositions in this time.

One day, Mozart taunted Haydn that the latter would never be able to play a piece which Mozart had just written. Haydn sat at the harpsichord, began to play from the manuscript, and then stopped abruptly. There was a note in the center of the keyboard while the right hand was playing in high treble and the left hand in low bass.

“Nobody can play this with only two hands,” Haydn exclaimed.

“I can,” Mozart said quietly. When he reached the debated portion of his composition, he bent over and struck the central note with his nose.