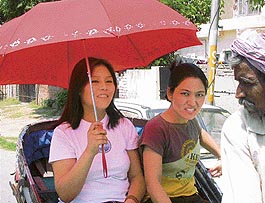 A Western Buddhist woman was in India, studying with her teacher, a Buddhist monk. She was riding with another woman friend in a rickshaw-like carriage, when they were attacked by a man on the street. In the end, the attacker only succeeded in frightening the women, but the Buddhist woman was quite upset by the event and told her teacher so. She asked him what she should have done – what would have been the appropriate, Buddhist response.

The teacher said very simply, "You should have very mindfully and with great compassion whacked the attacker over the head with your umbrella."