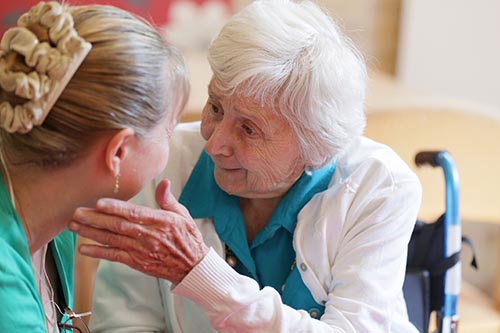 While dementia patients can often suffer from depression and declining physical and mental ability, exercise has been shown to help improve both their physical and psychological wellbeing. Researchers at Teesside University in the U.K. investigated how combining cognitive activities and elements of yoga, tai chi, qigong and meditation with routine physical exercise affected dementia patients. They found that a holistic exercise program focusing on both mind and body can help improve quality of life for dementia patients. Their findings are published in the Journal of Bodywork and Movement Therapies.

For this study, conducted in association with the Alzheimer's Society (UK), researchers developed the Happy Antics program, a holistic exercise plan that integrates physical movements with activities designed to take the emotional, intellectual, social, and spiritual health of patients into consideration. Each Happy Antics session started with a short cognitive exercise during which participants were shown a picture of an object while the instructor spoke briefly about it. Then patients were encouraged to discuss the object and ask questions. This activity was followed by warm-up exercises and then physical exercise incorporating principals of tai chi, yoga, qigong, and dance movements. Each session ended with a short, guided meditation activity that focused on breathing and mindful awareness.

Fifteen participants ranging from 52 to 86 years old attended the program: eight dementia patients, five care-givers, and two volunteers. The overall attendance rate for six sessions was 70%, and all participants reported having enjoyed taking part in the holistic exercise sessions, looked forward to attending them, and felt like the sessions helped them socially. Some patients also said they felt more relaxed after the sessions and experienced some degree of pain relief. Other patients found learning to do the new exercises “empowering,” even though sometimes they faced physical difficulty performing the tasks.

“When the wellness approach is applied to exercise, holistic exercise strives to encourage individuals not only to take part in the physical activities, but also to become aware of their own physical and psychological states, and to perform exercise that is purposeful and meaningful to them,” explained lead investigator Yvonne J-Lyn Khoo, BSc (Hons), MSc, PhD, of the Health and Social Care Institute, Teesside University.

The holistic mind-and-body approach proved to be both enjoyable and helpful for patients suffering from dementia. Not only did they like the sessions, but also showed improvement in memory recall in their anticipation of the physical movements associated with the music.

The Happy Antics program included participation by care-givers. While the program helped dementia patients, it also had positive effects on the other participants, with one care-giver reporting less pain after attending the sessions. This particular finding of pain relief after participating in holistic exercise is an important one given the unique complexity of chronic pain. “This suggests that participating in holistic exercise may offer some relief in burden for care-givers as they face many challenges in providing care for patients with dementia, including physical and psychological distress,” added Dr. Khoo.

Dementia is a complex and debilitating condition, but with holistic exercise programs like Happy Antics, patients experienced some relief, joy, and lasting positive effects. “The Happy Antics program was able to stimulate and engage people with dementia in exercise as well as provide a social learning environment and offer potential psychological benefits,” concluded Dr. Khoo.

We have 940 guests and no members online