Ayurveda, Hinduism and the Holy Cow 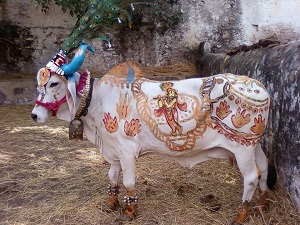 Millions of Hindus revere and worship cows. Hinduism is a religion that raises the status of Mother to the level of Goddess. Therefore, the cow is considered a sacred animal, as it provides us life sustaining milk. The cow is seen as a maternal figure, a care taker of her people. The cow is a symbol of the divine bounty of earth.

Lord Krishna, one of the most well-known of the Hindu deities is often depicted playing his flute amongst cows and dancing Gopis (milkmaids). He grew up as a cow herder. Krishna also goes by the names Govinda and Gopala, which literally mean “friend and protector of cows.” It is considered highly auspicious for a true devotee to feed a cow, even before eating breakfast oneself.

Throughout the Vedic scriptures there are verses which emphasize that the cow must be protected and cared for. It is considered a sin to kill a cow and eat its meat. Even today in India, there are many states in which the slaughter of cows is illegal. That is why you can find cows roaming freely all over India, even along the busy streets of Delhi and Mumbai.

Ayurveda is a big proponent of the sattvic qualities of milk and dairy products. That is why most Hindus are vegetarian, but not vegan. Fresh, organic milk, yogurt, buttermilk, paneer (homemade cheese) and ghee, are all considered highly nutritious, and an important part of the diet. Not only do these dairy products provide important protein and calcium for our tissues, but are sources of Ojas, which gives our body strength and immunity.

Besides their milk, cows also provide many practical purposes, and are considered a real blessing to the rural community. On the farm, bulls are used to plough the fields and as a means of transportation of goods. Even Lord Shiva’s trusted vehicle is Nandi- the sacred bull. 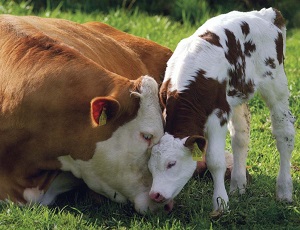 Cow dung is saved and used for fuel, as it is high in methane, and can generate heat and electricity. Many village homes are plastered with a mud/cow dung mixture, which insulates the walls and floors from extreme hot and cold temperatures. Cow dung is also rich in minerals, and makes an excellent fertilizer. There is a big organic farming movement in India to return to ancient methods of utilizing cow dung to re-mineralize the depleted soil.

In such a spiritual land as India, one can find religious ceremonies taking place at any time and any place. Spiritual “yagnas” are fire ceremonies that performed to thank the Gods and receive their blessings. Cows even play a central role in these fire yagnas or Agnihotras. Scientific research has found that the ritual of burning cow dung and ghee as fuel for these sacred fires, actually purifies the air, and has anti-pollutant and anti-radiation qualities in the environment.

Ayurveda understands that some physical and emotional health crisis cannot be healed by diet and herbs alone. They need the deeper and subtler healing of these types of Vedic ritual ceremonies to clear astrological past karma. The holy cow again offers its bounty by providing the ingredients in the Panchamrit, or blessed drink, that is distributed after the ceremony. Panchamrit translates as “sacred ambrosia” or “nectar of the gods” and is made up of 5 items – milk, yogurt, ghee, honey and sugar. By drinking this sweet prasadam, one is infused with the divine energy created during the puja, and is healed.

History of the “Sacred” Cow

In ancient India, oxen and bulls were sacrificed to the gods and their meat was eaten. But even then the slaughter of milk-producing cows was prohibited. Verses of the Rigveda refer to the cow as Devi (goddess), identified with Aditi (mother of the gods) herself.

Even when meat-eating was permitted, the ancient Vedic scriptures encouraged vegetarianism. One scripture says, "There is no sin in eating meat... but abstention brings great rewards." (The Laws of Man, V/56).

Later, in the spiritually fertile period that produced Jainism and Buddhism, Hindus stopped eating beef. This was mostly like for practical reasons as well as spiritual. It was expensive to slaughter an animal for religious rituals or for a guest, and the cow provided an abundance of important products, including milk, browned butter for lamps, and fuel from dried dung.

Some scholars believe the tradition came to Hinduism through the influence of strictly vegetarian Jainism. But the cow continued to be especially revered and protected among the animals of India. By the early centuries AD, the cow was designated as the appropriate gift to the brahmans (high-caste priests) and it was soon said that to kill a cow is equal to killing a brahman. The importance of the pastoral element in the Krishna stories, particularly from the 10th century onward, further reinforced the sanctity of the cow.

The cow remains a protected animal in Hinduism today and Hindus do not eat beef. Most rural Indian families have at least one dairy cow, a gentle spirit who is often treated as a member of the family.

The five products (pancagavya) of the cow — milk, curds, ghee butter, urine and dung — are all used in puja (worship) as well as in rites of extreme penance. The milk of the family cow nourishes children as they grow up, and cow dung (gobar) is a major source of energy for households throughout India. Cow dung is sometimes among the materials used for a tilak - a ritual mark on the forehead. Most Indians do not share the western revulsion at cow excrement, but instead consider it an earthy and useful natural product. 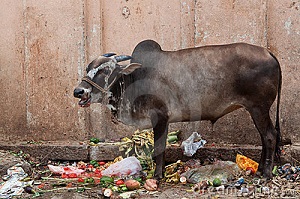 Despite their sacred status, cows don't seem very appreciated in India. Visitors are often surprised to see them walking neglected around city streets, living on garbage from the gutters. But the cow is honored at least once a year, on Gopastami. On this “Cow Holiday,” cows are washed and decorated in the temple and given offerings in the hope that her gifts of life will continue.

We have 579 guests and no members online