Names are inherently fantastic, both literally as “marked by extreme individuality” and metaphorically as “conceived by unrestrained fancy” or “ingenuous, clever in contrivance and use.”

One of the remarkable facts about name study is the extent to which it serves as a link between otherwise diverse disciplines and activities. Geography, history, genealogy, sociology, folklore, linguistics, etymology, literary criticism, anthropology, lexicography, encyclopedia texts, dialectology, manufacturing terminology, trade-naming, marketing, criminology, legal studies, scientific terminology, psychology, astronomy, philosophy, and pop culture are some of the motley crew that join hands in the study of names (that is, onomastics). 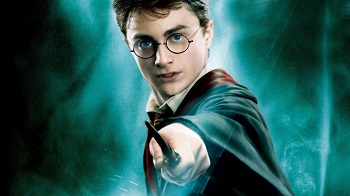 Two films on popular works of fantasy (Harry Potter and The Lord of the Rings, each the first of a series) prompt thoughts about onomastics in fantasy literature. 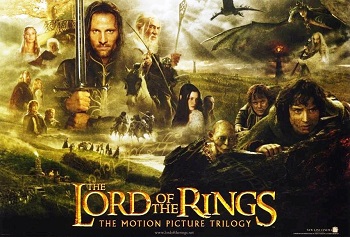 Fantastic names are topical because of those movies and because of the popularity of the novels on which the films were based. But fantastic names have an intrinsic and not just a fashionable timely interest. Real names in literature are limited by the reality they represent. Fictional names in fantasy literature, by definition, represent no reality, so can correspond to whatever playfulness, symbolism, or mystery their writers wish or (writers not always knowing what they have wrought) their readers discover. 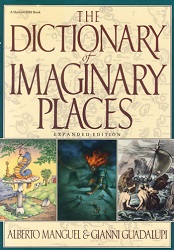 The Dictionary of Imaginary Places

Serendipitously, as I was contemplating this essay on names in fantasy literature, I took a stroll through our local mall and inevitably stopped off at one of its chain bookshops, on whose bargain sale table I found a copy of The Dictionary of Imaginary Places, “the newly updated and expanded classic” by Alberto Manguel and Gianni Guadalupi, for an irresistible 80 percent off the list price. The gods, I decided, had sent me an omen. The roughly 775 pages of the volume fairly teem with utopias (at least in the etymological sense of that word, “not-place”). So, once again proving the correctness of the cultivated observation of Oscar Wilde, who said, “I can resist anything but temptation,” I bought the bargain.

The Dictionary of Imaginary Places contains (according to its blurb) more than 1200 entries ranging from Abaton (said to be from Greek a - ‘not’ and baino ‘I go’, a Scottish town that unpredictably changes its location, described by Thomas Bulfinch in his 1892 My Heart’s in the Highlands) to Zyundal (one of the Isles of Wisdom in the north Pacific, described by Alexander Moszkowski in his 1922 Die Inseln der Weisheit). The dictionary also includes two entries (Forbidden Forest and Hogwarts) from the first two Harry Potter books by J. K. Rowling.

Forbidden Forest, being a descriptive name, is not particularly interesting onomastically. But Hogwarts is. It is the name of a school to train young Witches and Wizards, located apparently somewhere in the north of England and accessed by the Hogwarts Express train, which leaves from platform 9 ¾ (an unreal track) at London’s King’s Cross Station (a real structure). Hogwarts is modeled on English upper-class public (anglice, private boarding) schools, which mark many a student for life. So the clang associations of its name are appropriate. Hog - is an ironic commentary on the English classes who attend the exclusive schools, and - warts suggests the way the schools rub off on their students. But the humor of the name is both gentle and very English.

In contrast with its mere two entries for Harry Potter, The Dictionary of Imaginary Places has a great many entries for the Middle-earth books of J. R. R. Tolkien, more than 200, drawn from The Hobbit, all three volumes of The Lord of the Rings, and The Silmarillion. But even that large number of entries is modest compared with the totality of names in Tolkien’s epic fantasy. 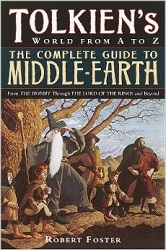 Two Tolkien name glossaries, Robert Foster’s Complete Guide to Middle-earth and J. E. A. Tyler’s Tolkien Companion, have respectively 435 and 531 pages of entries for names of Middle-earth places, people, things, and events. Tolkien’s linguistic and onomastic inventiveness was indeed epic in proportions. He was a philologist with knowledge of a score of tongues, which he drew on in creating fourteen different languages for various populations of Middle-earth. Quenya, the ancient High Elven tongue, is based on Finnish; Sindarin, one of the later Elvish languages, has a pronunciation influenced by Welsh; the language of the Rohirrim, the Horselords, is represented in Tolkien’s books by Old English, and their culture is likewise based on that of the Anglo-Saxons.

Some of the names used by Rowling and Tolkien have shared features. For example, Rowling’s arch villain is Lord Voldemort, generally called not by name but by the superstitiously euphemistic epithet “You-Know-Who.” Voldemort, a Nazi-sounding moniker, echoes German wollen, “to wish,” and Romance mort, “death”; he is a personified death-wish. Tolkien’s arch evil is Morgoth, again echoing mort, “death,” plus the name of one of the Germanic tribes with a particularly bad rep, the Goths. Morgoth is associated with a land called Mordor, once again echoing the mort theme or, more specifically mordant or murder. It is also referred to as the “Black Land” or the “Nameless Land.” So villainous persons and places in both Rowling and Tolkien have similar names associated with death or are unnamed. Borrowing need not be invoked as an explanation; independent use of common symbolism can account for the resemblances. 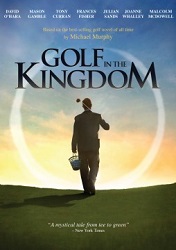 Golf in the Kingdom

But Rowling’s and Tolkien’s works are not the only sorts of fantasy. Some fantastic fiction, unlike Harry Potter or Middle-earth, is cloaked in realism. Examples are two golfing novels that treat the game as a metaphor for a spiritual quest: Golf in the Kingdom, by Michael Murphy, and The Legend of Bagger Vance, by Steven Pressfield. 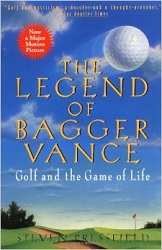 The Legend of Bagger Vance

Both novels have golf links that are allusively named. In the first novel, the Links of Burning-Bush evoke the encounter of Moses with Yahweh in the wilderness; and in the second, the links at Krewe Island is a less obvious allusion to Kuru Field, the site of the battle of the Mahabharata, where the Bhagavad Gita is set. Indeed, The Legend is an elaborate parallel to the Gita: for example, its protagonist is R. Junah, paralleling Arjuna, the hero of the Gita, and his black caddy is Bagger Vance, paralleling Bhagavan, “the Lord,” an epithet of Krishna, whose Sanskrit name means “the black one” and who served as Arjuna’s charioteer. In both novels, playing the game of golf becomes a metaphor of searching for spiritual discovery and leading an integrated life. Works of this kind transmute ordinary reality into extraordinary fantasy.

The writers of fantasy works are creators of a world whose boundaries are only what the authors choose. Fantasy is therefore potentially the richest of all genres of literature for onomastic analysis focusing on a connection between the name and the named. That connection is a central concern of philosophical onomastics, as exhibited for example from the Platonic dialog of the Cratylus onward. In addition, there is a playfulness in fantasy onomastics that is very human. Our species has been called Homo faber, Homo loquens, and Homo ludens, “man the maker,” “talking man,” and “playing man.” In fantasy onomastics we are all three at once. And that is a reason, both productive and pleasurable, for pursuing the study.