In the aftermath of John Lennon’s murder, there was only one place George Harrison could go for shelter. 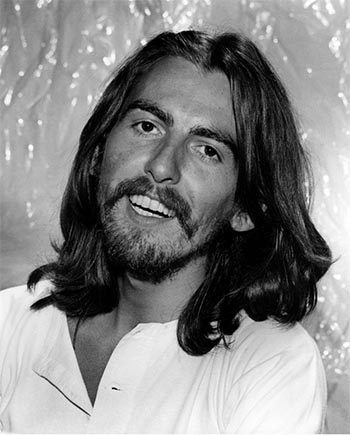 Recently, a student in my university course on mysticism waited until everyone had left the room before coming up to my desk. “Professor Greene,” she said, “you know that point in class about how levels of meditation can be compared to different levels of love? I wanted you to know that really touched me. I’d never thought about meditation as a way to deepen love for another human being. So—thanks.” This from a twenty-three-year old who rarely said anything in class, all the action going on below the surface. She tossed her backpack over her shoulder and sauntered out. It was the kind of payoff for a teacher that makes up for months of academic trivia.

Stuff happening below the surface …“Du-du-du …” I found myself humming a Harrison song called “Sat Singing,” a little known 1980 recording by the former Beatle that reveals a deep experience in meditation. As the song begins, George sings about the sun shining in a clear blue sky. He begins to meditate and sings of drifting away, of entering into a deep state with no memory of anything that came before. An unseen lover appears in his heart.

George sings of leaving behind his embodied life, moving deeper into his ecstasy, drifting into a golden flow, an undulating effulgence that surrounds him and absorbs him until he feels he has become one with his unseen lover. The song extends the moment of intimacy through gently textured slide guitar and a lulling patter, “du-du-du …”

Then, slowly, George emerges from his reverie. The sun is setting and he realizes he has been in a state of bliss for a long time. But there is no disappointment over losing the reverie, only joy. He calls his lover’s name. If only he could return to that place, he sings, he would never regret leaving the world behind. He would gladly kiss the rest of the world good-bye if he could just stay forever in his lover’s company.

The title “Sat Singing” plays on the Sanskrit term sadhu-sanga used in Hindu, Buddhist, Jain and Sikh traditions to mean the company of holy people. George had been keeping company with holy people for the past fourteen years, starting with his first trip to India in 1966 to study sitar with Ravi Shankar. Then in 1968, he brought John, Paul, and Ringo with him on a retreat to Maharishi Mahesh Yogi’s ashram in Rishikesh. On return to London, he met disciples of Bhaktivedanta Swami Prabhupada, a revered instructor of bhakti or devotional yoga. In their company, George began chanting mantras, particularly Hare Krishna, and incorporating meditative practice into his daily routine.

For a superstar who had been part of history’s most successful rock group, such dedication and discipline were rare. As a fellow student of Bhaktivedanta Swami, I remember joining fellow Krishna devotees on visits to George’s home in Friar Park west of London and marveling at the oil paintings of four-armed Vishnu and brightly colored posters of Hindu demigods that decorated his huge Victorian manor. He kept a small marble altar to Krishna over the fireplace. Chanting sessions could go on for hours without a break. We would arrive around 9am and assemble in his living room, he would sit down at his harmonium—a keyboard instrument played with the right hand while the left pumped air through a bellows fixed at the back—and we would begin chanting one mantra or another: sri ramajaya rama jaya jaya rama or hare krishna hare krishna krishna krishna hare hare. The chanting and playing would go on until lunchtime.

George wrote “Sat Singing” shortly after John Lennon was murdered outside his New York apartment building. It was George’s sister Louise who heard about it on the radio from her home in Illinois and called her brother. Several days later, after the shock had worn down, George gave an interview.

“We saw beyond each other’s physical bodies,” he told a reporter, seeking to reassure fans that John’s soul lived on. “If you can’t feel the spirit of some friend who’s been that close, then what chance have you got to feel the spirit of Christ or Buddha or whatever else you may be interested in?”

On the popular British talk show Aspel & Company he added, “I believe what it says in the Bhagavad-gita: ‘Never was there a time when you did not exist, and there will never be a time when you cease to exist.’ The only thing that changes is our bodily condition—I feel him around here.”

No one could blame George for wanting to put a positive spin on the tragedy. But if martyrdom was the price for rising so high in this world, neither could anyone fault him for wondering if he would be next. The Beatles wanted only good for the world, and the world had made their lives miserable. The post-Beatles George wanted only to send out a spiritual message to heal people. Would the world show its appreciation in the same way? If nowhere was safe, where should he go?

“Sat Singing” is a candid portrait of samadhi or profound meditation —a journeying within oneself to a place of undisturbed quiet and at-oneness with creation. The bhakti or devotional yoga tradition describes meditation as taking place in evolving stages, called rasas or tastes, and the stage of union described in George’s song is considered highest.

The meditative journey begins with a passive awareness of the Divine called shanta-rasa or neutrality, a peaceful but inactive knowledge of God’s presence. This early stage is compared to sugar cane juice: liquid and pure, but easily shaken. Shanti or peace receives much attention in Western yoga classes, but the bhakti texts describe peacefulness as only the beginning of what the soul can know.

When the meditator advances to the point of wanting to act on awareness of the Divine, shanta-rasa stage erupts into dasya-rasa or servitude. The devotional tradition compares this stage to cane juice boiled and thickened into syrup. At this point the meditator experiences awe, reverence, and an excitement over moving meditation out of a yoga studio and into everyday life.

This active stage is a more advanced level of God realization, but servitude nonetheless implies higher and lower stations. When meditation intensifies still further and distinctions of higher and lower disappear, the meditator awakens to a feeling of friendship with Krishna, God in personal form. This is sakya-rasa, a sense of God as one personal friend, and it is likened to syrup that has thickened into molasses. India’s ancient wisdom texts recount stories of cowherd boys of Krishna’s village Vrindavan (about two hours south of Delhi), whose games and sporting with Krishna demonstrated such love. In their friendly exchanges, the cowherd boys are oblivious to his position as Supreme Godhead.

Interaction between friends is casual, informal. Love that has evolved still further sheds that informality and reaches the level of vatsalya-rasa or parental affection. The adult residents of Vrindavan manifested this loving mood, and the tradition describes this stage of love as having the consistency of molasses further condensed into crystals.

When love for God achieves its most intense stage, the parental sense of duty disappears. What remains is ecstatic abandon, a “merging” of self-interest into that of the divine Lover. This stage, madhurya-rasa to conjugal affection, transcends rules, responsibilities and social conventions. The Gopis or cowherd girls of Vrindavan expressed this highest, passionate love of God, which the tradition compares to rock candy. The union of Krishna and the Gopis is the highest realm of meditative experience in the bhakti tradition, a place George hints at in his remarkable song “Sat Singing.”

George never considered himself a guru. We don’t find these details of progressive stages of spiritual love in his lyrics. He preferred to let the music speak for itself. There are times, though, like that afternoon in the classroom, when a student’s appreciation for what meditation can achieve will send me back to those heady days when my own spiritual life was tender and unformed, and a single line from a George Harrison song somehow managed to magically summarized a shelf-full of feelings and emotions. 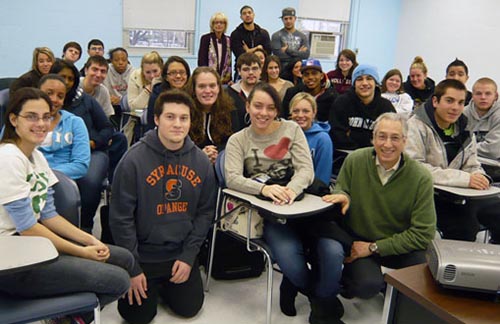 The author (right)  and students at Hofstra University

We have 436 guests and no members online