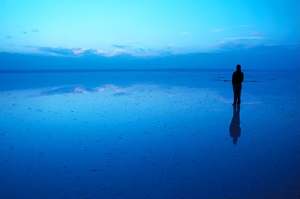 The final verses of the first fragment seek to describe the state of samadhi. The word samadhi has two main parts: sam “together” and dhi “put.” It is the state in which we finally have put it all together. And that is the goal of yoga. It is a state in which we realize our complete identity with everything else in the universe.

[90] And now thy self is lost in Self, thyself unto Thyself, merged in that Self, from which thou first didst radiate.
[91] Where is thy individuality, lanoo, where the lanoo himself? It is the spark lost in the fire, the drop within the ocean, the ever-present ray become the All and the eternal radiance.
[92] And now, lanoo, thou art the doer and the witness, the radiator and the radiation, light in the sound, and the sound in the light.
[93] Thou art acquainted with the five impediments, O blessed one. Thou art their conqueror, the master of the sixth, deliverer of the four modes of Truth. The light that falls upon them shines from thyself, O thou who wast disciple, but art Teacher now.
And of these modes of Truth:
[94] Hast thou not passed through knowledge of all misery — truth the first?
[95] Hast thou not conquered the Maras’ King at Tsi, the portal of assembling — truth the second?
[96] Hast thou not sin at the third gate destroyed and truth the third attained?
[97] Hast thou not entered Tau, the Path that leads to knowledge — the fourth truth?
[98] And now, rest ’neath the Bodhi tree, which is perfection of all knowledge, for, know, thou art the Master of Samadhi — the state of faultless vision.
[99] Behold! thou hast become the light, thou hast become the sound, thou art thy Master and thy God. Thou art Thyself the object of thy search: the Voice unbroken, that resounds throughout eternities, exempt from change, from sin exempt, the seven sounds in one,
THE VOICE OF THE SILENCE
[100] Om Tat Sat

B. COMMENT.
Verses 90-92 describe the ultimate unity of samadhi under various metaphors. Verse 90 suggests that the personal self (“self” or “thyself”) has become one with the individual self (“Self” or “Thyself”), and that unity is merged in the greater unity of the monad (“that Self”), from which we came forth in the beginning. When that identity is realized, there is no longer a distinction between the spark and the fire, the drop and the ocean — they are essentially one. There is no difference between the actor and the observer, light and sound — they are different aspects of a single Reality.
In verse 93 the enlightened person is said to be acquainted with the five impediments and to deliver the four modes of truth. These are identified in gloss 43:

Gloss 43. The four modes of truth are, in Northern Buddhism, Ku “suffering or misery”; Tu the “assembling of temptations”; Mu “their destructions”; and Tau, the “Path.” The five “impediments” are the knowledge of misery, truth about human frailty, oppressive restraints, and the absolute necessity of separation from all the ties of passion and even of desires. The “Path of Salvation” is the last one.

There are a good many sets of five in Yoga and in Buddhism. For example, there are five vices or afflictions (kleshas); they are ignorance (avidyā), egoism (asmita), attachment (raga), aversion (dvesa), and clinging to life and dread of death (abhinivesha). There are five components out of which our identity is built (skandhas); they are our body (rupa), the feelings (vedana) that come to us through the body, the perceptions (sanna) that we form on the basis of those feelings, the predispositions (samskara) to respond in certain ways that we acquire from our perceptions, and the consciousness (vijnana) we arrive at from our predispositions. Only when we are aware of the existence of something, such as the five afflictions or the five components of our identity, can we deal with them.

The four modes of truth, which are further specified in verses 94-97, are the Four Noble Truths of the Buddha: The first is that life is painful, transitory, and without anything one can depend on; that is, it is frustration. If there were only one truth, the first, that life is frustrating, there would be no hope in the message of the Buddha. But frustration is not inherent in the nature of things — it is caused. That is the second noble truth: frustration has a cause. The second truth assures us that order exists in the universe. Things don’t just happen. They happen for some reason, because of something.

Still, if there were only two truths, we would not greatly rejoice. Knowing that things are caused is all very well, but we want to know also that they can be cured. And that is the third truth. Frustration has a cure. It is not eternal. There is an end to it. However, knowing that a problem can be cured is one thing and knowing how to cure it is another. So we need finally a fourth truth, a way to the cure of frustration. The cause of frustration is wrong action, wrong desire, and wrong thought. It is ignorance, craving, and egotism. The tendency to give way to such impulses is personified as the Mahā Māra, the Great Death, or Tempter, the Eastern equivalent of Satan. He has a jewel in his head, the brilliance of which stuns and misguides the unwary. But the jewel is not real; it is a false jewel, an illusion. We think it has value, although in truth it has none. We find that to be so in many little things in life:

Gloss 44. At the portal of the “assembling” the King of the Māras, the Mahā Māra stands trying to blind the candidate by the radiance of his “Jewel.”

Whatever has a cause has also a cure. So finally and best, there is a way we can discover that cure and apply it. The way to the cure of the cause of frustration is the Eightfold Path, or Tau (which suggests the Chinese Tao). Gloss 45 says that there are five paths we can choose to follow, which lead variously to joy or to sorrow. But all paths involve the principle of causation. As the Three Truths of the White Lotus say, we are each our own law-giver, the dispenser of glory or gloom to ourselves, the decreer of our life, our reward, our punishment:

Gloss 45. This is the fourth “Path” out of the five paths of rebirth which lead and toss all human beings into perpetual states of sorrow and joy. These “paths” are but subdivisions of the one, the Path followed by Karma.

The Noble Eightfold Path of Buddhism consists of these steps: (1) Right views. We can’t do anything right unless we see things in the right way. (2) Right intention. Having seen aright, we must resolve to do aright. (3) Right speech. Speaking or thinking, which is unuttered speech, precedes acting. (4) Right action. Our behavior must be appropriate. (5) Right livelihood. And specifically the means by which we live must be so. (6) Right effort. The Masters of the Wisdom say, “We have one word for all aspirants: TRY!” (7) Right mindfulness. We are to be aware of what we are doing and not act unconsciously. (8) Right contemplation. In fact the word here translated “contemplation” is actually samadhi.

Thus the Noble Eightfold Path of Buddhism leads to the same end as the eight limbs or stages of Yoga: samadhi, having it all together, being unified in consciousness with the ultimate Reality. Verses 98 and 99 are ecstatic expressions of the awareness that comes from the state of samadhi, the state of being truly awake, of being a Buddha.

Verse 100 completes the first fragment of The Voice of the Silence with the mantra of the Gita: Om Tat Sat. Om is untranslatable, being not a normal word, but a symbolic sound that suggests the wholeness of existence. Tat is the demonstrative pronoun “that.” Sat is the present participle of the verb to be and so means “being.” Thus the mantra might be rendered literally as “Oh, that Being!”

The mantra is given and commented upon in the Bhagavad Gita, chapter 17, verses 23-28. Om is said to be the beginning of things. Tat is said to be the performance of actions without desire for their fruit — that is to say, doing things because they are right to do, not because one hopes to get something from doing them. Sat is reality because it is what is; it is goodness because what is, is good; it is steadfastness because that which is never ceases to be; it is the ultimate because only the ultimate truly is. The mantra is thus an assertion that the ultimate nature of the universe is good, enduring, and real. One Western commentator on the Gita, Tom McArthur, has translated this mantra in a memorable way: “Well, that’s the way it is!” That is what the Voice of the Silence says.

This completes the first fragment of The Voice of the Silence, which is a kind of Theosophical Yoga Sutras, dealing in particular with the eight stages of the process of Yoga.

C. MEDITATION.
Think about the Four Noble Truths. See their connections with each other and the liberating effect they can have if we realize their truth.

Focus your attention on any object, imagine yourself moving into that object, becoming it, being one with it. Expand your awareness, so that you are one with everything around you.