Food for thought – The wheel of life

[This article appeared in the March 2013 issue of The Theosophical Movement. For more articles published in this excellent magazine follow this link: http://www.ultindia.org/previous_issues.html ] 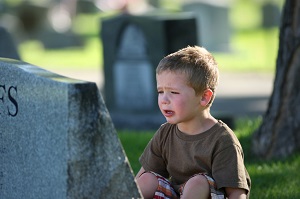 “Where has my mommy gone, grandmother? “Arthur’s lip trembled as he asked the question. For days he had not been allowed to go into his mother’s room. “Hush! Your mother is sleeping” or “Mother isn’t feeling well; you must be quiet.” Or, after school, he would be told to run down the street and play. That very morning a neighbor who had a car had taken Arthur for an all-day outing, it being Saturday, when there was no school, down to the sea, where he had always loved to go. He had waded and picked up shells and eaten sandwiches and fruit and little cakes. He had slipped a little pink-frosted cake into his pocket, to take home to his mother. They had waited to see the sunset before she had brought him home and he had run into the quiet house and been overjoyed to see the door of his mother’s room, kept closed all these days, standing open. Puzzled not to find her, he had run to his grandmother, who had come to live with them not very long before. She drew him to her when he asked his question. “You know your dear mother had been very sick, Arthur. She left her love for you but she has had to go away to rest.”

“But, grandmother,” he wailed, forgetting how old he was and crying like any little fellow, “she wouldn’t go away and not tell me good-bye. She always told me when I went to school, ‘Good-bye, dear boy, be good!’”

“She had to go, dear. She will come someday.” “When, grandmother, when? He stamped his foot in exasperation and bafflement.

On Monday, when Arthur went to school, he saw a child point at him and say to another child, “He has lost his mother, His mother is dead.”
Arthur’s heart sank. On going home he asked his grandmother, “What does it mean for a person to be dead, grandmother? A boy said my mother is dead!”
“It means just what I said, my darling. She’s gone away to rest. You know that when you play hard all day you rest all night and in the morning you wake up as fresh as ever. Well, being ‘dead’ means that we need a longer sleep. And what do you think your mother is dreaming about while she ‘sleeps’?”
“Me?”

“Surely, besides you she is dreaming about your daddy, her mother and daddy, and all the relatives and friends she loved. She certainly must dream of us and sometimes we dream of her.”

“Every night,” Arthur’s father told him, “your mother was not really here with us when her body was asleep. You could tip-toe into her room and even hum a little tune without her waking up; but you knew that in the morning she would be awake and would talk to you and read you a story. It is like that now, only she is very sound asleep. When the right time comes, she will wake up again.”

One day when the leaves were putting on their bright autumn colors, they all drove out to see them in glory. But the next time they went the leaves were falling and the day came when most of the trees were bare. Arthur’s father told him that the trees, although they looked so quiet, were working steadily and would work all through the winter, even when the snow fell, preparing for the new time of growth. 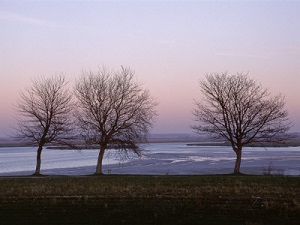 When spring drew near they watched the glossy little buds that, from being almost flat against their twigs, swelled more and more week by week till they unfolded slowly and leaves and flowers came out. And Arthur’s father taught him another verse about the
“Power divine which moves to good.”

In dark soil and the silence of the seeds
The robe of Spring it weaves….

“And then, daddy?” Arthur asked.

“Over and over again the Wheel of Life turns, son! It turns for people too. We call it spring when the tree puts on a new coat of leaves for its active season. The spring season for every Soul, like you and mother and grandmother and me, begins when we put on a baby body. And it grows and fills out and gets tall and strong and then, when our autumn time comes, whether after many years, or sometimes only a few, we have no more use for the body, just as the tree has no more use for its old coat of leaves. Before the leaves of a tree fall off or even turn bright-coloured they give back to the tree all they have that would be of use to it. 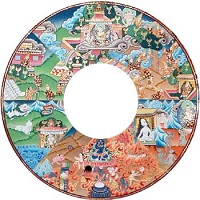 “It is the same with us. Our Soul is like the tree and all the good things that we have thought and felt and said and done are like the food the leaves give to the tree. While we are away, the real Soul part of us, sometimes for years and years, is very busy, like the tree
in winter, getting ready for another life in a new body, as the tree gets ready for another spring.”

Death is a morbid subject even for most adults, but it is important that children also begin to have right concept of death. Each child is an old soul in a new body. As children grow up they witness death of their pets, of their grand-parents or some elderly relatives. It is important for a grieving person to grasp that death is not an end.

Death is a transition, and there is waking into another life. The pamphlet What is Death? suggests that death only brings an end to the body, but the “real person” lives on, and that when karma permits we will meet “him” or “her” again in some other life. Thus: “In spite of the fact that you have suffered and grown hopeless because of your recent loss, a new cycle of growth and understanding can be before you….What was it that you loved of this Being who has passed—the body? Or was it the soul that used it? You knew that individual through all his changes of body, of which there were so many. This in itself is proof that it was not the body but something else you loved. And is that Soul which you loved now dead? How can you say so—you who persist through every change of form! That which lives and thinks in you is the ‘Eternal Pilgrim,’ for him there is no beginning and no end, however many changes of body and of mind you use. Nothing is ever lost. This losing of yours is nothing but loss of physical contact for a little while…..”

The two Theosophical books, Eternal Verities and “Because—” For The Children Who Ask Why, which deal with philosophical and moral subjects, such as, Karma, Death and Rebirth, Dreams, Ghosts, God and Prayer, are written in easily understood manner, so as not to overwhelm the understanding of a child. In the book “Because—” For the Children Who Ask Why, the aunt of two children who had lost their mother explains that like petunia plants dying in the frost, the worn out body of their mother had died. The children are told by their aunt to try to be happy for their Mother, because kind death came to her tired body. Like putting away the clothes that have grown ragged and old, mother had put away her
body and she will come back again in a newer, better body. Death is like sleep. During sleep, for a time, we leave our bodies behind us, and live in other bodies of our souls, and live in a world of dreams and dreamless sleep, untouched by sorrow. However, their Mother’s love for them did not die with her body, just as their own love for their mother did not die because her body was dead.