The Dream That Never Dies 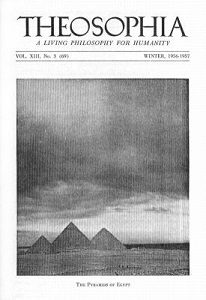 We had dreamt of a better world ... We had been told by figures prominent on the stage of current history that the chances for peace and good-will among men were greater than ever ... With eager thought and hopeful heart, we had pictured ourselves a global family of nations bent upon a common task - the building of a new commonwealth of the people, dedicated to the arts of peace and progress. The harnessing of the atom for the good of all men, the development of science and research across all boundary lines and racial discrimination, the recognition of the simple right of all men to unfold their own particular lines of growth and culture ... all these, and many other noble ideals were floating in the ambient air, seeking for embodiment.

Then suddenly, torn violently from these ideas which reflected but our over-optimism, we saw coming upon us from the surrounding darkness of unregenerate human nature a black cloud of cruelty, oppression, greed and inhumanity. Brothers were killing brothers; men were trampling the inherent dignity of other men like themselves; innocent men, women and children were mowed down with the latest implements of destruction; deeds of unspeakable cruelty, selfishness, and brutality gave the lie to streams of high-talking and lofty word-weaving, and people who but a short while before had declared themselves to be the protagonists of liberty, freedom and equality, engaged in sordid chicanery, dishonest double-dealing, or outright rapine and devastation ...

We had dreamt of a better, nobler world ... Suddenly, we woke up from the enchanting, lovely dream, and looking around, after a few brief moments of dismay, found ourselves, of all places, back home in the jungle ... But our dream is not dead! It is still a living thing, pulsating, beating with its own heart-beat, flooding with its un-earthly radiance the higher levels of human consciousness, brooding over the imperfections of men and the temporary triumph of the powers of darkness ... That dream can never die! Out of it were born all the noble reforms throughout untold centuries of human progress; all the selfless deeds of valor which have helped the race to mount the thorny road of spiritual unfoldment and material growth; all the visions of the future which, from time to time, became the present, and gradually receded into the past, while greater visions rose upon the distant horizons of our hopes, beckoning us to come up higher ... Out of that ageless dream of human perfectibility and global consciousness came the mighty thoughts which have shaped the new forms of civilization, and gave impetus to men and women to attempt the seeming impossible, and to scale new heights of achievement ... Out of it will come other thoughts, yet mightier and nobler, which will sustain the coming generations in their struggle for a world of enduring peace and good-will among men ...

We enter through the mystic Portals of Januarius with hope undimmed. We see the old and venerable god Janus, with his two faces, one turned towards the past, and the other towards the future, to which he holds the key. Many doors did he open in the past, now lost in the night of time; many other doors will he open into the un-dreamt possibilities of the future, and the ever-widening vistas of coming centuries.

It is precisely when the heavy clouds of human passions rise again from the depths of our as yet largely imperfect nature, that the time is auspicious to re-assert our noblest ideals, to take firm resolutions to work for the upliftment of the race, to impress upon our plastic minds thoughts of perpetual growth, endless improvement, unending change along the spiral course of evolution; it is just when ideals are trampled, and heroic deeds are denied or laughed at, that it is of paramount need for true men and women to proclaim the enduring strength of these ideals and the lasting value of noble action, backed by strong and lofty thoughts.

Herein lies the essential purpose and value of the modern Theosophical Movement. It is a granary of ideas intended to impregnate the fertile soil of a new cycle of thought, and its votaries are pioneers of the spirit, whose life is dedicated to the liberation of the human race from the shackles of the senses and the dominion of material interests. Others have done it in ages past, and still others will follow the present workers when these have gone to their temporary rest. It is a work of ages. It requires men and women of vision, to whom personal concerns of praise, well-being, recognition and reward are of very small value if any, and whose heart and mind are astir with the echo of a distant symphony whose chords are vibrant with the music of the spheres, whose strings respond to the Wind of the Spirit ...

The call is for men and women of magnanimous heart, of all-encompassing sympathy, of greatness of soul, whose quiet serenity of the spirit creates peace among discord, light in the midst of darkness, wholeness in separateness and good-will among contention. With good old Horace we may say: "Every man whom perverse folly, whom ignorance of the truth drives on in blindness, the Porch of Chrysippus and his flock pronounce insane. This definition takes in whole nations, this takes in mighty kings, all save only the sage" (Satires, II, iii, 43-46.). The future will establish upon a sound scientific basis the fact that all inhumanity of man to man is a state of temporary insanity, a "descent" or "stepping down" from the natural level of genuine humanhood, and therefore must be treated as a disease of the mind and an affliction of the soul.

The road to spiritual growth lies through the jungle of our personal selfhood, and the barbed wire entanglements of our passions; through the bleak and dreary lands of despair and doubt, and on to the sunlit slopes of intuitive knowledge, towards the pure snow-covered peaks of our Spiritual Himalaya, where the unfading glory of our own Divine Self shines in the silent stratosphere of our own inner being.