The Universality of the Movement 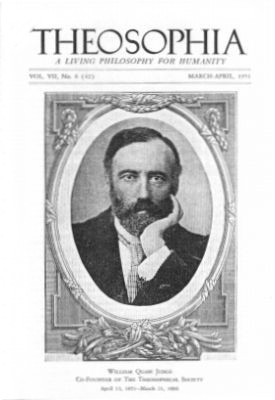 There is abroad in the world a Force which is akin to the Sun. In silent places, far from the rushing torrents of worldly life, it works its silent magic, unperceived. Yet in the crowded marketplaces of men its message can also be heard, its grip and password recognized, if you but search for them. It works for Good; for Right, for Truth. Beginning - it has none, nor can it ever have an end, for it is a living, dynamic Energy, pulsating in and through the spiritual atmosphere of the Earth itself.

This Mystic Force, which flows, to a greater or lesser extent, through every selfless man or woman who is definitely working for the spiritual advancement of mankind, manifests itself in the world as a ceaseless drive, a never-ending urge towards higher knowledge, an impulse towards ethical regeneration, character achievement, spiritual illumination and inner conquest. Embodied in men and women of a mystical trend of mind, of universal objectives, and of deep-seated search for Realities, this drive or urge is the Theosophical Movement, irrespective of age, civilization, or outward form through which it may operate.

The essential key-note of the Theosophical Movement throughout all ages has been its Universality. By the very nature of its message, its objectives, and its ideals, it can never be confined to any single group of human beings, to any single ethnic grouping of humanity, or any single department of human thought and endeavor. Everything that is genuinely Theosophical, is unconditionally Universal in meaning and application, in theory and practice. Conversely, anything that is in the least dogmatic, intolerant, sectarian and constricted, can never be genuinely Theosophical, no matter what may be the painted label, or the honeyed words, under which it is offered and presented.

As pointed out by Master K.H. (Mahatma Letters, p. 367): "Beware then of an uncharitable spirit, for it will rise up like a hungry wolf in your path, and devour the better qualities of your nature which have been springing into life. Broaden instead of narrowing your sympathies; try to identify yourself with your fellows, rather than to contract your circle of affinity."

The greatest enemy of the Theosophical Movement is sectarianism, dogmatism, self-righteousness, which are but different facets of one and the same tendency in our character, namely, separateness. Wherever and whenever these manifest in theosophical work, degeneration sets in, and the open vision of the stars is beclouded by the fumes of the brain-mind. Personal allegiances supercede devotion to Humanity as a whole. Personal adorations are set up sooner or later - sometimes embodied in a person, and sometimes in a book. The circle of affinities narrows down, and another church is born, with high-priests, mental and moral genuflections, and the makings of a new creed. Every manifestation of the Universal Theosophical Movement had to fight this tendency. The modern manifestation of that Movement is no exception in this respect.

It should also be borne in mind that outward Organizations, good and needful as they may be, can never house or embody more than a fraction of a Movement which is by essence and nature Universal and ageless. Institutions come and go. They rise and pass away. Personalities, even the greatest, are at best but fleeting shadows on a wall. But a Movement, and especially a spiritual one, is an integral part of what might be termed Cosmic Circulatory Systems, intimately linked with the evolutionary growth of Mankind as a whole.

Therefore, whatever may be our personal allegiance to this, that, or another fragment of the original Theosophical Society, doing splendid work in their respective spheres of influence, our primary spiritual allegiance should be to the Theosophical Movement as a whole, ageless and universal - a surging, vibrant, soul-stirring power flowing from the very Heart of this Globe itself, and [4] derivative ultimately from the Sun. It suffuses Humanity and interpenetrates it, even though Humanity at large is often unconscious of it altogether. To quote from Master M. (Mah. Let., p. 271): "The sun of Theosophy must shine for all, not for a part. There is more of this movement than you have yet had an inkling of, and the work of the T.S. is linked in with similar work that is secretly going on in all parts of the world."

Every genuine and impersonal work in the Cause of the Theosophical Movement - which is the Cause of the "Great Orphan", Humanity - is an integral part of a universal pattern, and has either the direct or the indirect backing of the Teachers and Custodians of the Sacred Knowledge, whose attention and guidance can be compelled only by impersonal service, self-forgetfulness, devotion to the noblest and highest, as one understands these, whatever one's limitation of outlook may be, and that love for principles and ideals which is the overtone of the life of every true server.

Disciples of the Great Ones are at work everywhere. Some of them are relatively great; some others not so great; still others are but beginners in the task of discipleship, even though they may stand far ahead of where you and I are to be found. Neither the quasi-occult institutions born of the original Theosophical Society, nor the progressive bodies within the corporate unit of Christendom, nor the halls of Science, nor the fields of social service, are devoid of them. For the Theosophical Movement is absolutely Universal and unbounded, and its ramifications permeate the human race. Teachers, Pupil-Teachers, and disciples, whatever their degree of knowledge, are not the prized and exclusive possession of any Organization or Institution, as such, not even a declared Theosophical one; they are at work the world over and remain, more often than not, unrecognized.

The modern Theosophical Movement has passed through many vicissitudes in the seventy-five years of its organized existence. It has seen the rise and fall of strange and peculiar ideas, parading under the peacock-feathers of genuine esotericism. It has endured the appearance of fraudulent leaders, with fantastic claims based on self-righteous conceit. It has been attacked both from without and from within by forces which had their ultimate source in personal selfish ambitions, love of power, and political chicanery. It has witnessed eluded fanatics arrogating to themselves knowledge and authority which existed in reality only in their diseased minds, enamored with their own imaginary greatness. It has survived all of these manifestations of human weakness and arrogance, and it can, without the slightest doubt, face a few new ones that may be in store for it, without either losing its spiritual influence in the world, or becoming mortally wounded under their temporary impact.

The Theosophical Movement - whether of today or of earlier times - is formed of the sum-total, the aggregate of occultists, mystics, and aspiring seekers the world over, whether they belong outwardly to any existing association for occult study, or belong to none. On inner lines, they are an integral part, whether consciously or not, of the same universal Mystic Order which belongs to no age or race in particular, yet embraces them all. Let this be remembered lest we fall a prey to the spirit of superiority and intellectual pride, and allow ourselves to imagine that other men and women cannot have access to true knowledge or see the Vision Sublime because, perchance, they are not avowed members of a Theosophical Organization. It is easy for us to founder on the rock of self-glorification, and to lose our way in the barren sands of self-righteousness!

The Teachers work at all times, ceaselessly and dynamically, through every channel that is open, and do not lose any opportunity of doing so. They help all those who make themselves ready for such help, and fan the holy flame of spirituality in every man or woman who shows the slightest sign of the Buddhic Light, the Christ Light. And this has absolutely nothing to do whatsoever with any particular organization, [5] society, lodge of association, nation, tribe, or body of men; nor does this bear any relation to the pigmentation of one's skin, or worldly position, or power, or money, or avocation, provided the channel is open, the aspiration is keen, and there exists in the heart of that man or woman a hunger to know, and to bring that knowledge to others who are seeking for guidance and the Inner Light. And anyone who would deny this, and try to erect artificial barriers of exclusiveness between students on the basis of a holier-than-thou attitude, is either laboring under a regrettable delusion, or is engaged in feathering his own nest.

The universality of the Theosophical Movement in every age and civilization establishes its all-embracing character and is a guarantee of its all-inclusive sympathies - sympathies for the souls of men.