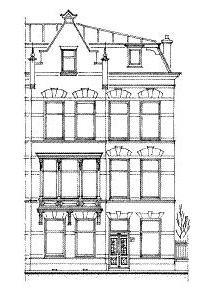 However, as we are all mortal, the ageing of the members and their passing out of physical life caused the membership to decline rapidly in the eighties and nineties.

In the beginning of the 21st century the number of members was heading under 20, with an all time low of 12.

If nothing would turn the tide it was clear that this lodge, the oldest and at one time largest of The Netherlands would come to an end soon. So a plan for revival was made. Public relations, the improvement of the public lectures, an introductory course to Theosophy for newcomers, more study groups, our own website www.denhaag.theosofie.nl . These were considered to be the means by which to accomplish a revival.

Financial means however were limited, so advertising in newspapers and other periodicals was too expensive. But distributing the booklet with the yearly program to much more places, like public library’s, bookshops, vegetarian restaurants, health food stores etc., cost nothing, only took some time of the volunteers who did it. Like in nature, plants living on earth and creatures living in the oceans release billions of seeds for a few plants and creatures to spring up, and even less to survive, so does successful advertising work. This is often overlooked, and too little is done, but it is of tremendous significance, especially in big cities, where thousands of activities are trying to draw the attention of the public. Also, although ones financial means are small, one needs to invest in order to be able to get results. And once having become enthusiastic, members are willing to donate, each to his or her ability.

As for the public lectures on Monday evenings, at the lowest point, just about seven years ago approximately only eight people attended them on average. Now, after having improved the quality and quantity from (ten to twenty lectures a year) the average attendance is approximately twenty.

Since the word ‘Lodge’ actually means ‘workplace’ it was thought desirable to have more activities in this sense, not only passive listening to lectures given by experts. At this moment in 2012 we have six study groups working in our lodge, in chronological order of starting date:

One can imagine that, looking from a higher plane to the city of The Hague, one can see at night the lights of spiritual work of different groups and institutions in this still materialistic age, and see how one light, which was so bright a hundred years ago but was almost extinguished, has flared up again in the 21st century.

I hope this short article will stimulate and give hope to Theosophists in other lodges, centres and countries who find themselves in the same situation. We owe it to the founders to continue the work for which they sacrificed so much.