NAGARJUNA'S PHILOSOPHY as presented in THE MAHA-PRAJNAPARAMITA-SASTRA

Although the fragments underneath would fit very well into our category QUOTATIONS, I thought that they would also go very well into the category THEOSOPHY since they transmit ideas which are so typically linked with Theosophical thought. 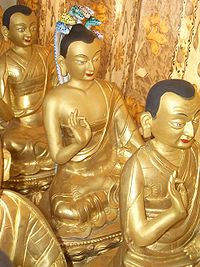 From clinging to things there arise disputes; but if there is no clinging, what dispute will there be? He who understands that all dristis, clinging or non-clinging, are in truth of the same nature, has already become free from all these. (61a)

The wayfarer that can understand this does not seize, does not cling to anything, does not imagine that this alone is true (and not that). He does not quarrel with anyone. He can thus enjoy the flavour of the nectar of the Buddha’s doctrine. Those teachings are wrong which are not of this nature (i.e., non-contentious and accommodative). If one does not accommodate other doctrines, does not know them, does not accept them, he indeed is ignorant. Thus, then, all those who quarrel and contend are really devoid of wisdom. Why? Because every one of them refuses to accommodate the views of others. That is to say, there are those who say that what they themselves speak is the highest, the real, the pure truth; that the doctrines of others are words, false and impure. (61a)

Thus every one of these contending teachers clings to his own standpoint and does not accommodate the view of others. “This alone is right all else is wrong”, he says. If one accepts one’s own doctrines, honours and cultivates one’s own doctrines and does not accommodate and honour others’ doctrines, and just picks up faults in them, and if this kind of conduct is the pure conduct, fetching the highest good, then there is none whose conduct is impure.” Why? Because everyone accepts his own doctrine. (61b)

In the dharma of the Buddha one abandons all passions, all wrong views, all pride of self; one puts an end to all (these) and does not cling (to anything). (63c)

Referring to the Sutra on the Raft, the Sastra says that the Buddha has taught there that one has to abandon one’s clinging even to good things, how much more to bad ones! He does not encourage any fond notion even in regard to the prajnaparamita or any learning on it or clinging to it. How much less should one cling to other things!

The intention of the Buddha is this: My disciples (must be) free from passion for Dharma, free from attachment to dharma, free from partisanship. What they seek is only the freedom from (passion and) suffering; they do not quarrel about the (diverse) natures of things. (63c)

In the Arthavargiya Sutra Makandika puts a difficulty before the Buddha:

(It may be that) in the case of rigidly fixing (and holding on to) things, there directly arise all sorts of (wrong) notions. But if all is abandoned, the internal as well as the external, how can enlightenment (Bodhi) be realized at all? (63c)

Thus what one should abandon is disputation as well as the (false) notion of “I” and “mine”; one should not cling to the diverse natures of things. It is in this way that bodhi can be realized. (63c)

*Prajnaparamita is the “Perfection of Wisdom."

†Nagarjuna (ca. 150–250 CE) was an important Buddhist teacher and philosopher. Along with his disciple Aryadeva, he is credited with founding the Madhyamaka school of Mahayana Buddhism. Nagarjuna is credited with developing the philosophy of the Prajnaparamita Sutras — even, in some sources, with having (re)revealed these scriptures in the world, having recovered them from the realm of the nagas (snake/dragon spirits) — and is also sometimes associated with the Buddhist university of Nalanda.