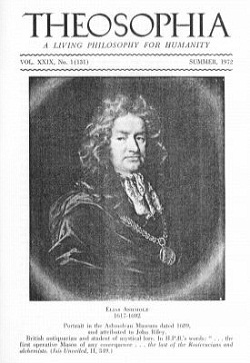 The basic propositions and principles of the Esoteric Philosophy are outlined without ambiguity in the writings of H.P. Blavatsky, her own Superiors in the occult hierarchy, and a few of their early disciples. It is to the dissemination of these basic thoughts and teachings that the life and work of the Founders was primarily devoted. Organizational details were merely the unavoidable framework required for the harmonious and efficient task of making the teachings known to an ever-increasing number of people throughout the world.

Careful examination of the present day Theosophical climate and the publications issued by existing Theosophical Organizations, disclose, even to a casual observer who examines the situation without prejudice or vested interests to defend, that a great variety of extraneous ideas and totally unrelated subjects have infiltrated the Theosophical philosophy during the twentieth century, with dire effects and regrettable results.

Ideas in complete or partial antagonism to the original installment of the teachings have become current throughout the Movement, only too often unrecognized or blindly accepted on "authority" by those who seem to be unaware of the basic principles of the Esoteric Philosophy as such. Many of these ideas have been imported from the general field of psychism, mediumistic clairvoyance (which has nothing to do with spiritual vision), astral visioning, overwrought imagination creating deceptive mental pictures, and wishful thinking. All in all, we have had for years a condition of psychic pollution which imperatively demands remedial ecological action, so as to purify the muddy stream of Theosophic and pseudo-Theosophic thought.

It is indeed an idea at least worth striving for, namely, to meet the 1975 centennial anniversary of Theosophical Society with a clear cut understanding, throughout the organized Movement, of what the original principles and teachings of the Esoteric Philosophy really are, and what are the deplorable departures from these teachings and the pseudo-teachings which have been allowed to pollute the originally limpid and invigorating stream from the fountain-head of Truth. To achieve this requires sincerity of purpose, fearless investigation, purposeful appraisal of the facts involved, and a refusal to be dominated by any vested interests or worldly pursuits against Truth and Facts. In any such project of Theosophical Ecology, those engaged in it must be prepared ahead of time for persecution and misunderstanding, and to be shown as the "enemies" of the Movement and as being, most likely, influenced by "black magicians" or their emissaries. This overworked trick is still very much alive in some quarters and might be used any moment to save the day. Ecology in the Theosophical field is often as unwelcome as it seems to be in various industrial fields, and this primarily on account of the fact, well known throughout history, that inconvenient truths ought not exist, and that search for historical facts and spiritual foundation-principles often comes to a halt when the existence of an Institution is endangered.

But of what value are any Institutions or Organizations when compared with the validity of the teachings, the purity of Theosophic thought, or the future well-being and growth of generations of thinkers yet unborn?

It is not our intention to imply that a clear cut distinction between the genuine Theosophical teachings and their distortions is easy to see. On the contrary, it is sometime very difficult, and requires a thorough knowledge of the teachings, as well as the ability to recognize subtle casuistry where it exists and to avoid self-deception. Distortions of the original teachings are the result of "astral intoxication" which often arises in psychically-sensitive people who become, for a number of co-related reasons, excessively charged with substances and forces native to the intermediate astral sub-planes. This shuts out for the time being normal access to their reasoning powers and the ability to appraise what they see in terms of sound judgment, intuition and analogy. Emotional reactions set in which further distort the pictures or impressions. There are, as a matter of fact, many modifications of mediumship, or mediumistic sensitivity, and they have nothing to do whatever with seances or trance-mediums. Precisely because of being so different from ordinary spiritualistic mediumship, they are often unrecognized, or parade under some high-sounding and totally misleading name.

Dealing with this overall subject usually brings up irate objections on the part of some who are determined to show that Theosophy cannot be defined in terms of any set teachings; that it has no creeds, no dogmas and no beliefs; and that the Theosophical Society has no doctrine to proclaim. All this is partially true, but it disregards other facts. And one of the most important facts is that H.P.B. and her Teachers started the whole project in the last quarter of the nineteenth century to bring back from oblivion the "accumulated wisdom of the ages; a "metaphysical and ethical system intended to bring about among men a right thought to be followed by action"; a teaching called by H.P.B. "the Great Doctrine - which the Theosophical Society, faithful to the promise of its triple programme, is engaged in bringing to light." It is "the archaic Wisdom-Religion, the esoteric doctrine once known in every ancient country having claims to civilization."

In all of her writings, primarily in The Secret Doctrine, the fundamental principles or tenets of that doctrine and that system are outlined with clarity and strength, so that no doubt can exist as to what Theosophy is, and what it is not. Had H.P.B. not done that, the spiritual weapon which she used to cut through the entrenched materialism of the age would have been blunted, and nothing very decisive would have come about from this initial effort at a spiritual rebirth.

In addition to our constant effort to disseminate the teachings and the ethical ideals of Theosophy, we must not lose sight of the obvious fact that the field of Theosophic thought must be swept clear of the accumulated dross by means of a wisely devised program of ecological purification.

We have 586 guests and no members online