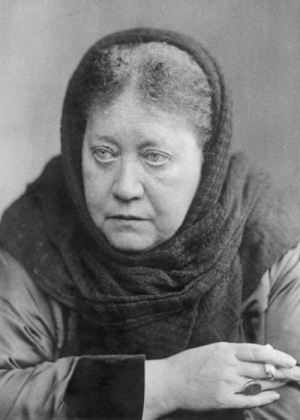 [From The Voice of the Silence, fragment 3 “The Seven Portals”]

216.    For, O disciple! Before thou wert made fit to meet thy Teacher face to face, thy Master light to light, what wert thou told?
217.    Before thou canst approach the foremost gate thou hast to learn to part the body from thy mind, to dissipate the shadow, and to live in the eternal. For this, thou hast to live and breathe in all, as all that thou perceivest breathes in thee; to feel thyself abiding in all things, all things in Self.
218.    Thou shalt not let thy senses make a playground of thy mind.
219.    Thou shalt not separate thy being from Being, and the rest, but merge the ocean in the drop, the drop within the ocean.
220.    So shalt thou be in full accord with all that lives; bear love to men as though they were thy brother-pupils, disciples of one Teacher, the sons of one sweet mother.
221.    Of teachers there are many; the MASTER-SOUL is one,8 Alaya, the Universal Soul. Live in that MASTER as ITS ray in thee. Live in thy fellows as they live in IT.
222.    Before thou standest on the threshold of the Path; before thou crossest the foremost gate, thou hast to merge the two into the One and sacrifice the personal to Self impersonal, and thus destroy the "path" between the two —  antahkarana.9
223.    Thou hast to be prepared to answer Dharma, the stern law, whose voice will ask thee at thy first, at thy initial step:
224.    "Hast thou complied with all the rules, O thou of lofty hopes?"
225.    "Hast thou attuned thy heart and mind to the great mind and heart of all mankind? For as the sacred river's roaring voice whereby all Nature-sounds are echoed back,10 so must the heart of him 'who in the stream would enter,' thrill in response to every sigh and thought of all that lives and breathes."
226.    Disciples may be likened to the strings of the soul-echoing vina; mankind, unto its sounding board; the hand that sweeps it to the tuneful breath of the great WORLD-SOUL. The string that fails to answer ’neath the Master's touch in dulcet harmony with all the others, breaks —  and is cast away. So the collective minds of lanoo-shravakas. They have to be attuned to the Upadhyaya's mind — one with the Over-Soul — or break away.
227.    Thus do the "Brothers of the Shadow" — the murderers of their souls, the dread Dad-Dugpa clan.11
228.    Hast thou attuned thy being to humanity's great pain, O candidate for light?

8. The Master Soul is Alaya, the universal soul or Atman, each man having a ray of it in him and being supposed to be able to identify himself with and to merge himself into it.

9. Antahkarana is the lower manas, the path of communication or communion between the personality and the higher manas or human Soul. At death it is destroyed as a path or medium of communication, and its remains survive in a form as the kamarupa — the shell.

10. The Northern Buddhists, and all Chinamen, in fact, find in the deep roar of some of the great and sacred rivers the keynote of Nature. Hence the simile. It is a well-known fact in physical science, as well as in occultism, that the aggregate sound of Nature — such as heard in the roar of great rivers, the noise produced by the waving tops of trees in large forests, or that of a city heard at a distance — is a definite single tone of quite an appreciable pitch. This is shown by physicists and musicians. Thus Prof. Rice (Chinese Music) shows that the Chinese recognized the fact thousands of years ago by saying that "the waters of the Hoang-ho rushing by, intoned the kung," called "the great tone" in Chinese music; and he shows this tone corresponding with the F, "considered by modern physicists to be the actual tonic of Nature." Professor B. Silliman mentions it, too, in his Principles of Physics, saying that "this tone is held to be the middle F of the piano; which may, therefore, be considered the keynote of Nature."

11. The Bhons or Dugpas, the sect of the "Red Caps," are regarded as the most versed in sorcery. They inhabit Western and Little Tibet and Bhutan. They are all Tantrikas. It is quite ridiculous to find Orientalists who have visited the borderlands of Tibet, such as Schlagintweit and others, confusing the rites and disgusting practices of these with the religious beliefs of the Eastern Lamas, the "Yellow Caps," and their Naljors or holy men.