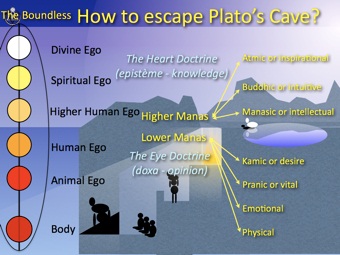 The Eye Doctrine and The Heart Doctrine

We already identified the two directions of our thinking. Another distinction can be made between what is called The Eye Doctrine and The Heart Doctrine. The Eye Doctrine is based on the outer, exoteric teachings with a focus on the intellect. It is based on how things appear to us and according to Plato can only lead to opinion and belief (doxa).
The Heart Doctrine is based on the inner, esoteric teachings with a focus on the heart, the spiritual or buddhic aspect. It is based on the principle that knowledge of things in themselves cannot be absolute (reasoning from boundlessness as a universal principle), however that all facts should be acknowledged. According to Plato this can lead to true knowledge or knowledge of The Good (epistème).

We can also apply this to education.

There are three main ideas in Plato’s description of education:
1.    First, that we have the inner light in ourselves we can ascend to;
2.    Secondly, that we need to “turn the whole soul” in our effort to ascend and
3.    Third: that instead of escaping alone, we can help others escape by passing on the light.

Education is ascending to our inner light

In Socrates’ conclusion of the Allegory of the Cave he refers to education. He says: “That education is not such a <518c> thing as some announce it to be; for they somehow say, that whilst there is no science in the soul, they will insert it, as if they were inserting sight in blind eyes.” The art of education is the art of conversion, he continues, and is not about implanting to the student “the power of seeing, but considering him as possessed of it”. The student is only looking at the wrong direction and education is the method to make the student look the other way, or in other words: make the soul look inside itself. Education in the true meaning of the word: the leading out of our inner wisdom: the spiritual light that is enclosed in our hearts.

It is therefore that the Socratic method always starts with questions. Finding out what our preconceptions are. Breaking the molds of mind first, before we can receive a new truth.

The “turning of the soul” has to be harmonious, using all our aspects

True education is the guiding out of all aspects of the human consciousness that are already present within us, from the most outer to the most inner principles, as harmoniously as possible. Like the eye which also needs the whole body to turn itself from darkness to light so Plato writes that “the whole soul, [must] be turned from [the world of change and] generation, till it is able to endure the contemplation of being itself, (...)” <518d>, that what Plato calls The Good.

But Plato also warns we should not focus on learning alone, but also bring it into practice <519c>:

“neither those who are uninstructed and unacquainted with truth can ever sufficiently <519c> take care of the city; nor yet those who allow themselves to spend the whole of their time in learning. The former, because they have no one scope in life, aiming at which they ought to do whatever they do, both in private and in public; and the latter, because they are not willing to manage civil affairs, thinking that whilst they are yet alive, they inhabit the islands of the blessed.”

Socrates explains that those who are educated well and have viewed the Idea of the Good should be persuaded to descend in the cave again. And they will see it is their duty to do so, because it is in the interest of the whole city. The city brought forth the education of the philosopher-rulers to escape from the cave, and so these philosopher rulers must educate others again to do the same. <520a>

3. Instead of escaping alone we can help others escape by passing on the light!
That is the vision Plato sketched in his Republic, starting with legislators who are led by the bodhisattva-ideal: dismissing the state of bliss for oneself and returning to the cave to help, educate and lead others.

So the idea is very simple: to create a society based on justice you need leaders that have true knowledge of the Good and are willing to spend their life living for the whole of society. This all starts with a true education that evokes the Good in these future leaders.

We will resume with a few statements for a Theosophical Education, which can help to answer the question “How to present Theosophy this day and age?”.

How to help others escape, lessons for Theosophical Education
Passing on the Light

First we have the role of the student. It is “the prisoner” who has to free himself from the fetters in the cave to ascend to the inner Light. It all starts with wonder or curiosity. If we do not question what is working behind the shadows, we will forever accept the shadows for what they are. Why do they appear as they do, and what is our role? Are we just spectators of the worldly drama or are we playing an essential part in it? And if so, what is the part we play or should play in it? These are questions students have to ask themselves in order to free themselves from the cave. Some start thinking about them when they are young, some when they are old, some only after something radically changes in their life, be it disease, an accident, a choice of study, a change of job, becoming a parent, etc.

1.    So to wonder, or to be curious is the first step for the student.
2.    The second is of inquiry, trying to find out what is the force behind what we perceive with our senses only. To find out what makes the shadows appear.
3.    The third is applying what has been learned from the inquiry. If one has hypotheses they need to be tested in daily life. But tested in an objective way, which means: while practicing self-forgetfulness, losing interest in what it means for oneself but instead seeing the interests of others as greater than one’s own.
4.    The fourth step is living the lessons which you have found to be true in application again and again, and therefore having become part of your character. Not as someting static - the essence of Nature is constant growth - so in all these four phases wonder never loses its value as a starting point for finding more Truth.

This process repeats itself until the student has found a way to ascend from the cave. And he will receive help as long as he is willing to climb up himself.

The teacher is the advanced student, who lives the ideals he found to be true in total self-forgetfulness. Who reflects the Light by being a living example of all that he teaches.

And if the student’s ascend to the inner Light starts with wonder, it is the teacher who has to further evoke this wonder within the student. Not by showing what he knows, but rather by questioning the known and providing hints of truth. Questions that further awaken the student’s inner curiosity for answers, for more light, for truth.

And this is different for every student. It is hard to evoke the same curiosity for the same questions for hundreds of students at the same time. You have to find the right keys to unlock the chains of each prisoner. And then the prisoner can climb up himself. The teacher as the midwife, as Socrates explained. [3]

The teacher also has to adapt to the world of shadows to explain to the prisoners that there is light outside the cave. In other words, the light he reflects must be pure, but the teachings have to resonate with current examples and to answer the actual problems of the time, in modern language.

Socrates warns about teaching dialectic when the students are not mature enough, and he recommends to start with dialectic not before the age of thirty. He makes a comparison with an adopted child surrounded by flatterers, which will influence him when he finds out his parents are not his real parents and will lead him astray <538a>. What does Plato mean? If someone who is still immature is brought into an environment where the things he learned are contradicted by the general opinion, he has to be very firm and confident to not lose faith in the things he learned.
When he is mature the lessons of morality have more chance of having a base of reason and experience, when he has found the teachings to be true themselves, whereas without a basis of reason or experience might lead to hypocrisy or cynicism when contradicted by the environment. Hypocrisy will occur if the student thinks he knows better when he finds out the outer world has contradictory beliefs, or cynicism when he starts doubting all knowledge, including what he believed before. So it is important for a student not to just believe, but to sequentially wonder, research, apply and to be - the four steps as mentioned above – and so to convince himself of the truthfulness of teachings. This is why ambiance or the right atmosphere is also a very important aspect in education.
But also as adults this is still a major influential factor. People as social beings aways tend to adapt themselves to their environment, for better or worse.

Think again of our faculty of thinking functioning as a transmitter and receiver at the same time. If we unconsciously follow the general opinion of the group, we are transmitting the same quality of thoughts. But imagine the power of a group of people sharing similar principles and purpose. People who are tuning their thoughts consciously on their ideals, trying to live them and bring them into practice. Although the group may be small, the degree at which they resonate could result in a major beneficial power in the world. Something to think about!

In conclusion, true education equals Theosophical education. Because it is based on the highest we can bring out in ourselves, what we are in essence, our divine qualities. This philosophy is not accidentally named Theosophia – the Wisdom of the Gods – transmitted to man along what the Greek called the Golden Chain of Hermes  –  Hermes the interpreter, from high to low, from Gods to men. [4]

In our utmost essence we are IT, we are the Boundless. And yet as manifested consciousnesses, living beings of whatever degree of development, there always will be higher and lower, teachers and students. All manifestation has a relative degree of knowledge, based on the phenomena it perceives. So we escape from one cave into another. But as long as we know there is a source of Light shining behind the veils inside ourselves, a beacon of Truth, we can always ascend, in whatever cave we may find ourselves.

We have 899 guests and no members online